Defining sustainable development: The woman who started it all

Ahead of the Macao International Environmental Co-operation Forum (MIECF), keynote speaker Dr Gro Harlem Brundtland, Special Envoy on Climate Change for the UN, looks back on nearly 30 years of the sustainable development movement.

Widely regarded as the “mother” of sustainable development, Dr Gro Harlem Brundtland has been an advocate of public health, political activism and the environment for most of her life.

As an environment minister, a prime minister, and a party leader in her home country of Norway, she gained international recognition as a passionate spokeswoman on key global challenges including human rights, global security issues, sustainable development and the environment.

It was in a 1987 report “Our Common Future” – written when she was chair of the United Nations’ World Commission on Environment and Development (WCED), eventually known as the Brundtland Commission – that she developed the broad political concept of sustainable development.

This movement eventually swept through governments, NGOs, businesses, think tanks and civic society globally over the past three decades. This September, UN member nations will meet in New York to agree on details of the Sustainable Development Goals, which will help define the future global development framework.

“It is clear that the Report from 1987 has set a large process of global change in motion,” Dr Brundtland told Eco-Business in a recent interview. “This year, finally, the world will decide concrete Sustainable Development Goals for the period up until 2030. 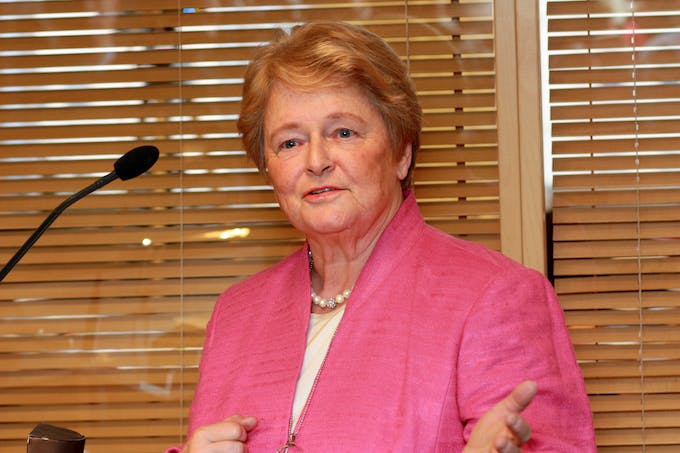 This same year, a climate deal will hopefully also be concluded in Paris. The two processes are closely interlinked, as our report made clear, when we warned about the danger of serious climate change, back in 1987,” she adds, referring to the December UN climate change meeting in Paris, where the world’s top decision-makers from government, business and civic society will try to draw out the most far-reaching global environmental agreement ever.

There is today much more awareness of the fact that we are in this together, and that there is no way to find workable solutions, unless there is global cooperation and global common responsibility, she observes.

“Much is yet to be done, but more and more actors are now aware of the crucial links between the environment and development, and ready to invest in the necessary change towards sustainable development,” she says.

When Dr Brundtland was invited in 1983 by then UN Secretary-General Javier Pérez de Cuéllar to lead the WCED, she was serving as Prime Minister of Norway. She was chosen due to her strong background in the sciences and public health, having studied medicine at Oslo University and Harvard School of Public Health.

It was at Harvard where she started forming her ideas of extending health beyond the confines of the medical world into environmental protection and human progress.

It was this expertise - the intersection of health, the environment and development - that led to her appointment in 1974 as Norway’s Minister of the Environment, where she was asked to focus on the links between public health and the environment.

Eventually, at age 41, Dr Brundtland became the country’s first female – and youngest ever - Prime Minister. Her varied background made her realise that the only enduring way to approach development is one that embraces all aspects of progress.

“To bring all countries and all people into an era of sustainable progress while protecting Planet Earth, only a broad and consistent approach to overcome poverty and secure dignity, human rights, health and education for all, will be a viable and acceptable alternative,” she says.

Much is yet to be done, but more and more actors are now aware of the crucial links between the environment and development, and ready to invest in the necessary change towards sustainable development.

After the WCED stint, she served as Director-General of the World Health Organization (WHO) from 1998 to 2003. In May 2007, she was named by the UN Secretary General, Ban Ki-moon, to serve as UN Special Envoy for Climate Change.

Today, she continues to travel the world, advocating sustainability and human rights. In March, she will be in Macao, China to attend the eighth Macao International Environmental Co-operation Forum & Exhibition (MIECF), where the focus will be on clean air and its technologies.

Macao, part of the greater Pearl River Delta – also home to the manufacturing powerhouses Guangzhou, Shenzhen, Zhuhai, Dongguan – sees the urgent need to take a stand for the environment and urges for its protection through greater public awareness and increased collaboration among companies and local governments. It is to this end that the Macao government established the MIECF.

The Delta is already home to nearly 58 million people and the World Bank calls it the largest urban area in the world, both in size and population. To balance sustainability along with economic growth and increasing urbanisation, the area will need to implement sound policies, Dr Brundtland says.

The region can become a model for other expanding megapolises. “Development patterns in this region will indeed influence, not just the millions living here, but the impact on a larger, global scale, for the future of humanity and its relationship with Planet Earth,” she adds.

Although the sustainability movement has achieved a lot in the three decades since the report, Dr Brundtland believes much more needs to be done before the Paris meetings in December. Public decision-making, governmental regulations and determination to direct the change we need “is essential,” she says.

“This means international as well as national and local plans of action,” she adds. “Only this way, and by global collaboration, will we see the private resources coming forward, in a manner that is consistent with an approach that is acceptable for the future,” she says.

With an exciting lineup of an international conference, exhibition, business matching and networking activities, MIECF offers access to opportunities from the Pan-Pearl River Delta Region of China (PPRD Region), Asia-Pacific and Portuguese-speaking countries and beyond.