A recent global study by Corporate Citizenship provides insights on corporate foundations and why they are shifting from mere altruism to a more strategic, hands-on approach. Elga Reyes reports.

While companies worldwide are increasingly integrating their corporate social responsibility (CSR) programmes into their operations, corporate foundations continue to be a popular vehicle for corporate giving, a recent report by consultancy firm Corporate Citizenship has found.

In the report, “Corporate foundations: A global perspective”, released in March, the UK-headquartered firm noted that the nature of corporate foundations are changing and many are moving away from traditional grant giving to a more focused and hands-on approach.

In some cases, these entities, although legally distinct, actively draw on the expertise and knowledge of the funding company to solve key social issues.

While there is no global definition for a corporate foundation, the firm in their report defined it as a non-profit body that has been established and primarily funded by a company for the purposes of social and community investment.

The firm’s co-founding director Amanda Jordan said the continued popularity of corporate foundations “might be surprising to some” as the trend is to integrate community investment and corporate responsibility more generally into mainstream business.

Uscreates, a London-based socially oriented consulting group, has pointed out that the distancing of social impact thinking and practice from boardrooms have led to mixed reactions about corporate foundations, which has attracted accusations that companies are outsourcing social responsibility, or even whitewashing socially irresponsible practices such as child labour.

But keeping social work away from the main operations of a company, though funded by it, is how a corporate foundation works, explained Victoria Hartley, associate director of Corporate Citizenship. “Foundations are usually independent entities set up to achieve a specific aim, driven by a social need,” she added.

It is our belief that rather than compromise the independence of the foundation, if developed and nurtured correctly, the relationship with the business should add value

In practice, though, this separation varies, resulting in what the report’s authors call a paradox. “Corporate foundations can never truly be independent because of their relationship with their funder – the business,” Hartley told Eco-Business.

“The paradox therefore lies in this relationship and how it plays out. It is our belief that rather than compromise the independence of the foundation, if developed and nurtured correctly, the relationship with the business should add value – enabling the foundation to draw on expertise, knowledge and resources that it otherwise wouldn’t be able to,” she added.

Benefits for both the business and foundation

CapitaLand Hope Foundation (CHF), the philanthropic arm of Singapore-listed real estate firm CapitaLand, is one example of a foundation with a strategic relationship with its founding firm. 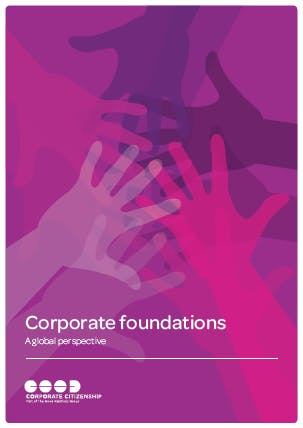 The global study on corporate foundations conducted by Corporate Citizenship, a British corporate responsibility consultancy with offices in Singapore and India, among others.

While CHF is an independent charity focused on the needs of underprivileged children, it is still influenced by CapitaLand, and vice-versa. The company provides the foundation with 0.5 per cent of its annual net profits every year, such as the over S$4 million it donated in 2012. The company also allows employees to serve as volunteers.

Conversely, CHF provides employee engagement and enrichment through this volunteerism and it also supports programmes in countries where the business operates, thereby enhancing the company’s reputation.

This mutually advantageous relationship is essentially rooted in one of CapitaLand’s strategic goals, which is to “go beyond donations and be actively involved in projects that will have a positive impact on both the community and the business”.

Such benefits, including enabling a company to express its values in a non-commercial way, are just some of the many advantages outlined in Corporate Citizenship’s global study, which interviewed 21 foundations in different countries, like CHF in Singapore and the Volvo Research and Educational Foundations in Sweden.

Hartley pointed out that the key benefit is the way a foundation “could create an impression of safety and stability in a dynamic and changing business environment”.

For example, the Toyota Motor Corporation started Toyota Foundation in the 1970s after 40 years of working in the automobile industry, she noted. Modelled after the Ford Foundation, which is one of the earliest corporate charities established in 1936, the Toyota Foundation provides grants that help communities in Asia to develop solutions to local challenges like earthquake disaster relief in Japan.

Choosing between a foundation or CSR programme

Given all the positive attributes a business could gain from a corporate foundation, deciding whether to engage in one or to embed CSR initiatives into company operations still depends on the individual company, Hartley said.

As it becomes more acceptable for a business to talk about the return on its investments, the case is growing for how CSR programmes and foundations can have a positive impact on reputation, morale and motivation of employees

“The stated benefits of having a foundation included an ability to ring fence funding that may otherwise come under threat from wider changes within the business. The foundation also provides a visible demonstration of the company’s commitment to an issue, and a focus on solving a true social need,” she said.

But some companies prefer instead to take a more holistic approach in their corporate social responsibilities. If the company has the culture and resources to deliver a CSR programme, then embedding these activities into its system may be sufficient and a foundation may not be appropriate, she explained.

For some companies, though, the choice does not have to be one over the other, such as with CapitaLand and Malaysia-based multinational Sime Darby. Both have a greater CSR strategy in place that works simultaneously with their respective foundations.

CapitaLand, for example, has community development as one of its main CSR pillars, and under this is the CapitaLand Hope Foundation. Tan Seng Chai, CHF executive director and chairman of CapitaLand’s sustainability committee told Eco-Business that CHF is aligned to the company’s credo of ‘Building People’.

The foundation furthers CapitaLand’s commitment to support underprivileged children and their belief that “each child has the potential for greatness, which if nurtured and built upon, can bring significant value to future societies”, he said.

Similarly, Sime Darby has an independent foundation called Yayasan Sime Darby (YSD) and it works closely with the founding company in areas where the foundation’s work overlaps with corporate responsibility projects, noted the Corporate Citizenship report. For example, YSD – which concentrates on environmental conservation, among others – collaborates with the company’s palm oil and rubber plantation division on reforestation and wildlife conservation projects.

This combined foundation and CSR framework underscores the “wider trend for more strategic giving”, Hartley emphasised. “A more strategic approach usually means a more focused approach, through which programmes and initiatives are aligned to the core business in some way,” she said.

“As it becomes more acceptable for a business to talk about the returns on its social and enviromental investments, the case is growing for how CSR programmes and foundations can have a positive impact on reputation, morale and motivation of employees, and more,” added Hartley.