Sustainability disclosure is now the top of the agenda for the world’s largest investors, companies and regulators in almost every major market. Despite that, overall disclosure is “still lacking” according to climate-risk task force.

Organisations that are resisting disclosing how climate change may affect their business, and what they are doing to fight it, should anticipate mandatory measures to do so. A growing number of countries are pushing companies and financial institutions to report their climate-related risk on a mandatory rather than a voluntary basis, the Task Force on Climate-related Financial Disclosures (TCFD) said on Thursday.

The TCFD, an industry-led group set up in 2015 by global financial regulators to improve climate-related disclosure, has for the first time updated aspects of its reporting standards.

This includes recommendations asking for more granular detail about a company’s exposure to climate risk and high-carbon assets. The task force encourages “all organisations to implement these recommendations” in anticipation of climate-related issues being determined as material to a firm’s balance sheet.

So far, companies have cherry-picked methodologies with reporting seldom revealing anything about future risks to a company’s bottom line, where climate risks largely sit. The TCFD was set up in an attempt to synthesise the alphabet soup of climate-related financial standards and establish a definitive framework.

The TCFD has not modified its four overarching recommendations on governance, strategy, risk management, and metrics and targets or the 11 associated recommended disclosures; however, it has updated the guidance for all sectors, asking for more robust reporting on how climate risk will affect a company’s bottom line. 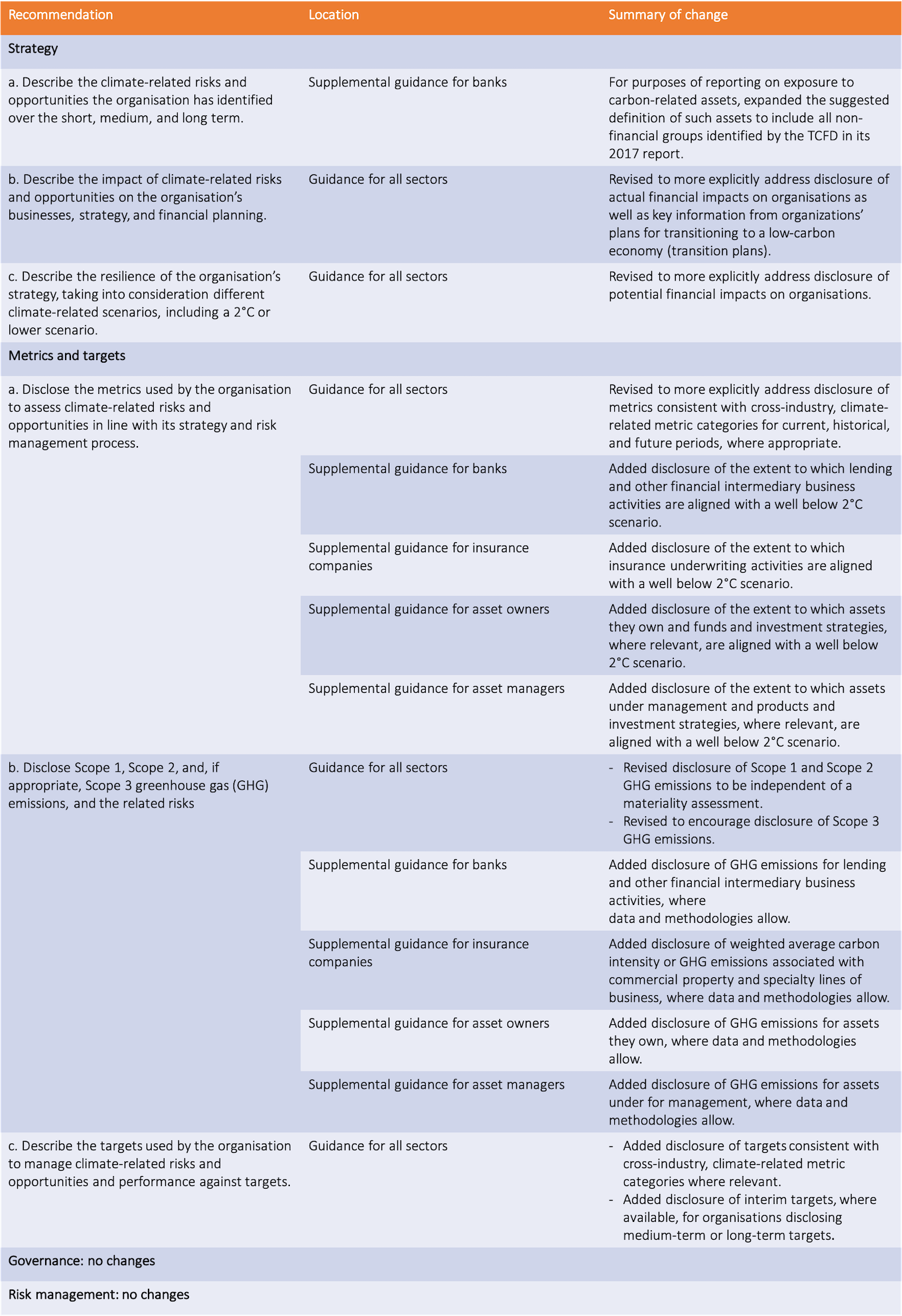 The revised guidelines, published on Thursday as part of a trilogy of reports, now ask organisations to disclose their greenhouse gas (GHG) emissions independent of a materiality assessment. This addition obliges every company, regardless of sector, to report their carbon emissions.

The reporting standard has also been revised to encourage the disclosure of Scope 3 GHG emissions, defined as indirect emissions that occur in the value chain of the reporting company, including both upstream and downstream.

Scope 3 GHG emissions have received increasing attention in recent years. As companies’ and jurisdictions’ commitments to reduce GHG emissions—both direct and indirect—to net-zero continues to grow; investors, lenders and insurance underwriters want insight into value chain GHG emissions and how they could be affected by such commitments.

While Scope 3 is harder to measure, it can easily account for most of a company’s carbon footprint. A report from carbon measurement firm CDP, published earlier this year, found that emissions from a company’s supply chain are on average 11.4 times higher than its operational emissions.

For banks, insurance companies, asset owners and managers, disclosure is required to ensure that business activities such as lending and investment strategies are aligned to a “well below 2°C scenario”. Banks specifically are now required to include non-financial groups that may constitute as a carbon-related asset. 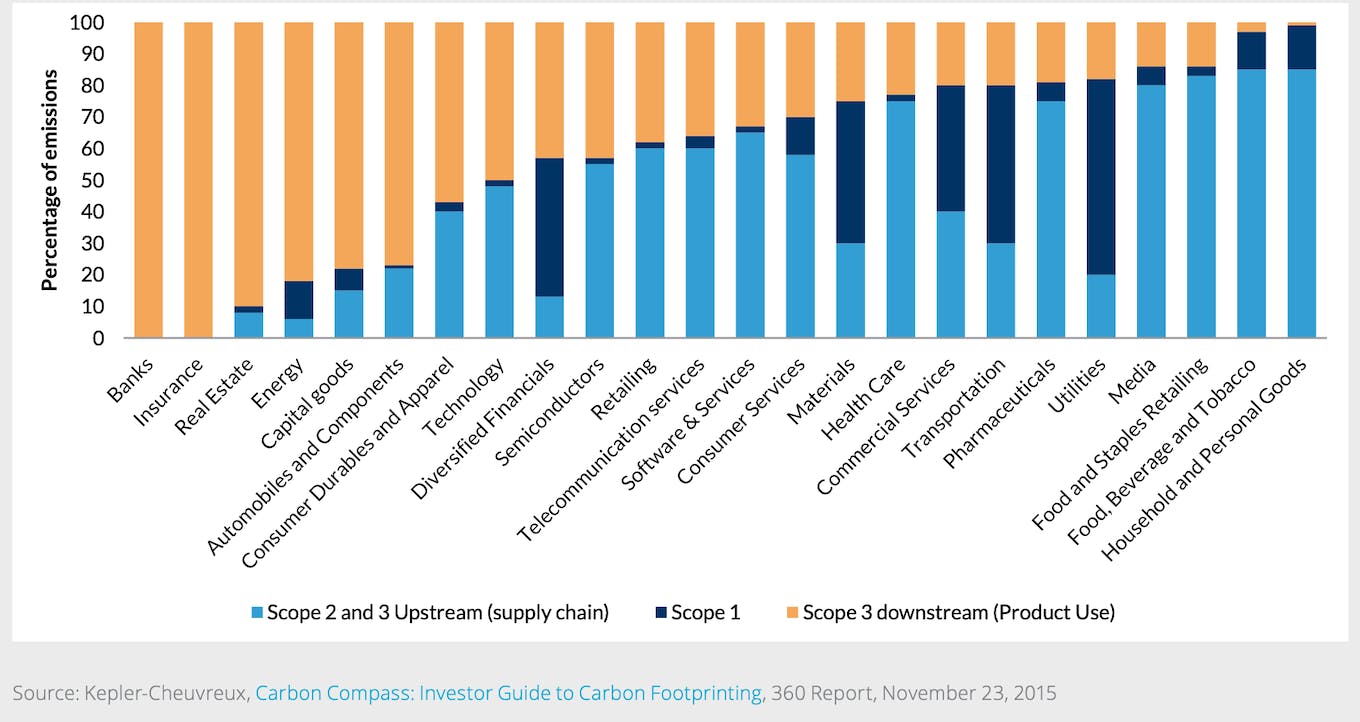 The task force recognises organisations may need time to implement some of these changes, especially in areas where methodologies are being developed or refined and data availability is limited. 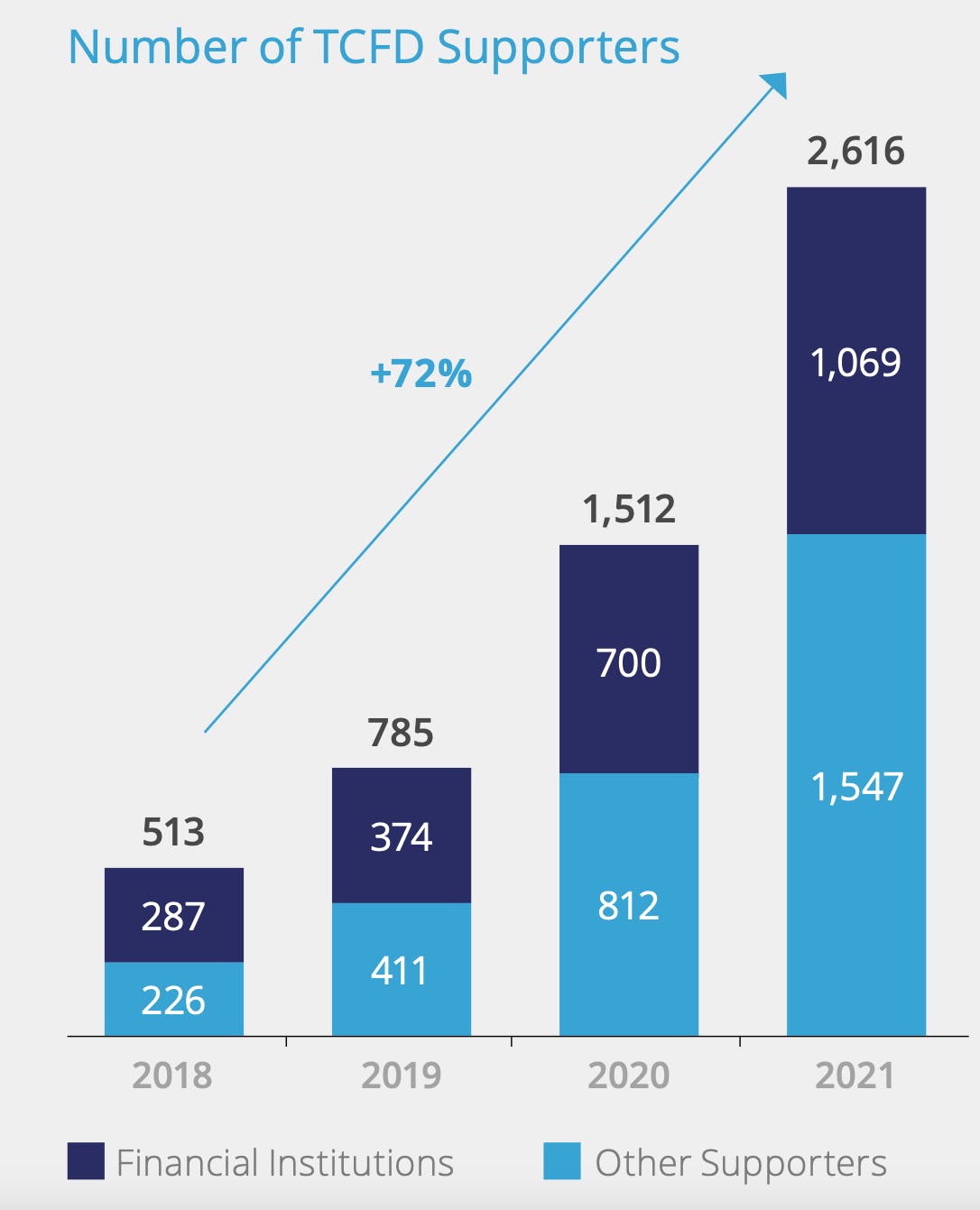 To date, 12 governments and dozens of central banks, supervisors and regulators have formally expressed support for the TCFD recommendations with more than 2,600 organisations endorsing them, an increase of over 70 per cent since last year, according to the TCFD. Supporters span 89 countries and nearly all sectors of the economy, with a combined market capitalisation of over US$25.1 trillion.

“There is clear and growing consensus among investors and regulators of the importance of climate-related disclosure and the need for standardised, transparent data to support capital allocation decisions,” said Mary Schapiro, head of the TCFD and vice chair for Global Public Policy at Bloomberg L.P.

Regulators are in favour of the TCFD’s efforts as the framework focuses on material risks rather than environmental impacts and how companies plan to mitigate them in the future. This includes stress-testing a company’s strategy against scenarios including temperature rise and higher carbon prices.

The Singapore Exchange announced in August that publicly traded companies in the city-state would be required to disclose their climate risk under internationally recommended guidelines, starting as early as fiscal year 2022 under its proposed roadmap. Disclosure will become mandatory in 2023 for companies in key industries including finance and transportation, and in most industries in by 2024.

Under pressure from their clients and regulators, financial firms are also in favour, making up just under half of the companies that back the TCFD’s recommendations. Together they hold assets worth over US$194 trillion.

Disclosure increased more between 2019 and 2020 than in any previous year assessed in-line with global momentum around climate related reporting. Despite the record growth of companies jumping on the TCFD bandwagon, many “continue to struggle to quantify the impacts of climate change, and to source the data they need to fully assess the threats of a changing climate,” TCFD chairman, Michael R. Bloomberg, said in the 2021 Status Report.

An average of only one in three companies reviewed by the task force disclosed climate-relate information aligned with the TCFD recommendations. Disclosure of the resilience of companies’ strategies under different climate-related scenarios did see a significant increase, but it continues to be the lowest of all recommended disclosures.

Materials and buildings companies now lead on disclosure, while groups “seen” to be less carbon intensive, for instance technology and media companies, disclose less. The task force found that generally, it can be challenging to secure buy-in to disclose the result of financial impact analyses, particularly where “disclosure is not mandated”. A lack of confidence in data, methodologies and assumptions is also hindering target setting and climate-risk disclosure.

Geographically, Asia Pacific comes second to Europe for disclosure rate. Nevertheless, the region could improve in its disclosure of climate-related targets, the status report said. In regions where climate reporting is more mainstream, firms are experiencing a competitive advantage in being an early mover on disclosure. In carbon-intensive sectors, where investors have been concerned by speculation regarding potential stranded assets: “Some … felt that proactively disclosing allowed them to control the conversation around their organisation and avoid speculation,” the report said.