The recently released Human Development Report has identified six major threats to human development and proposed a set of policies and reforms to address these vulnerabilities.

Climate change could be the “single biggest hindrance” to global development objectives such as poverty eradication, universal education, longer life expectancy, and the prevention of disease, according the latest Human Development Report (HDR) 2014, launched in Tokyo on Thursday.

The report, published by the United Nations Development Progrmame, identified climate change and natural disasters as one of six key threats to human development, along with economic instability, inequality, food insecurity, conflict and health problems.

Titled ‘Sustaining human progress: reducing vulnerabilities and building resilience’, it aimed to provide a fresh perspective on vulnerability – or the degree to which people suffer a decrease in living standards due to external threats - and suggested ways to address these challenges.

It noted that factors such as socio-economic status, geographical location, gender and ethnicity determined how vulnerable people were. If these were not identified and addressed, it could jeopardise human development for years to come. 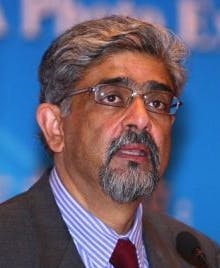 Speaking to Eco-Business in a recent interview in Singapore, lead author of the report Khalid Malik said: “Traditionally, people talk about vulnerability in relation to specific risks such as disasters or violence. But what we tried to do in this report was dig a little deeper and see what the underlying drivers of vulnerability are”.

Helen Clark, UNDP Administrator, added in a statement: “By addressing vulnerabilities, all people may share in development progress, and human development will become increasingly equitable and sustainable”.

The report went on to suggest a series of policies and reforms that would reduce this vulnerability across all societies and build up resilience, which refers to peoples’ ability to cope and adjust to adverse events.

It offered a set of four key principles to guide policy-making, including:

At the centre of the report was the idea of universalism, which declares that all individuals are equally valuable and entitled to protection and support. Authors noted that governments could help achieve a level playing field for all individuals by providing basic social services such as education, health care, water supply and sanitation.

Malik said that this has been a central concern of human development since the founding of the Human Development Index (HDI) in 1990 by Pakistani economist Mahbub ul Haq. He was fond of asking why national budgets are always balanced on the backs of the poor, recounted Malik.

“The poor suffer the most when austerity budgets cut down on social expenditures, because the rich can protect themselves. But if one accepts universality principles, it should be the other way around, where special attention is paid to the disadvantaged”, he said.

The report also debunked the commonly held misconception that only wealthy countries can afford to provide universal social services. Scandinavian countries such as Sweden and Denmark began to provide these services when their per capita gross domestic product (GDP) were even lower than the current GDP per capita of all the countries in South Asia today.

It argued that there were some things that were essential to increasing people’s security and resilience, such as climate stability. When these ‘global public goods’ were compromised, international and regional action was needed to ensure that vulnerable groups could cope with these challenges.

It stated that “under provisioning of climate stability – a global public good – and the manifestation of vulnerability to extreme weather events and food crises have been a recurring threat in different regions of the world”, adding that “multilateral action is key” to tackling this urgent problem.

“It is the underprovisioning of a global public good - specifically, a climate change agreement - that is the deeper reason for the ongoing conflict in Syria”, said Malik.

He pointed to a drought that lasted from 2002 to 2006, destroying rural livelihoods and sending farmers into cities in search of employment. It was the social tensions that arose from urban unemployment that sparked the crisis, he added.

“In the report, we argue that there are new institutions and ways of thinking that have to be created at a global level to minimise risks and shocks”, he said.

In addition to minimising the climate threat through global action, the report also looked at reducing vulnerability to climate change by eradicating poverty.

In a special contribution to the report, Rajendra Pachauri, chair of the Intergovernmental Panel on Climate Change (IPCC) wrote that “addressing the underlying causes of vulnerability, including the structural inequalities that create and sustain poverty and constrain access to resources” was a pre-requisite to sustainable human development in the context of climate change.

The report also highlighted the fact that the societies most vulnerable to natural disasters were often the ones who were not responsible for resource depletion and climate change.

For example, the countries that ranked the highest on the UNDP’s Human Development Index (HDI) - which measures income, life expectancy and education - consumed resources far beyond their fair share of globally available resources. Countries such as Norway, Australia, Sweden and Singapore fell into this category.

It was only countries at the lowest end of the HDI, such as Nepal, Niger, Sudan and Haiti that consumed resources within the amount that the planet could support. 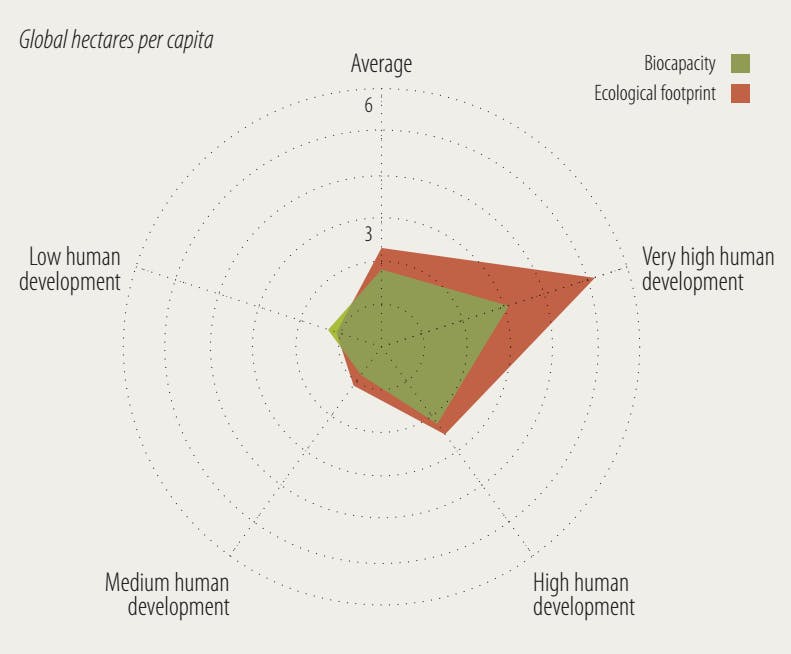 Low human development countries are the only ones whose ecological footprint is within their biocapacity. Image: UNDP

“This presents a twofold challenge, where developed countries have to bring down their pressure on the ecosystem very sharply, and developing countries have to maintain the low levels of ecological footprint as they grow”, said Malik.

He cited the global recognition of the opportunities and benefits in pursuing green economies as a possible strategy to meet this challenge.

Speaking from his experience in China as UN Resident Coordinator from 2003 to 2010, Malik recalled a project he launched called ‘Green Lights Project’, which aimed to have energy saving lights installed in every Chinese home in five years.

“If that goal was achieved, it would lead to an estimated 8 per cent reduction in energy demand, which is very substantial. If you were to create an additional generating capacity of 8 per cent, that would cost hundreds of millions of dollars,” said Malik.

“This makes it clear that it is more cost effective to pursue conservation measures and keep the footprint of development small, rather than the old business model of ‘pollute first, clean up later’”.

“New ways of doing business such as social enterprises, ethical investing, and public private partnerships are emerging, and people are beginning to realise the opportunities of pursuing green economies”, he said.

As the world prepares for a post-2015 sustainable development agenda, the report argued that vulnerability is a crucial concept to address in order to for development to continue effectively and sustainably.

The report also added that the importance of reducing vulnerability will increase as “threats such as financial crises, fluctuations in food prices, natural disasters and violent conflict” spread ever faster and further.

For governments, the challenge of managing these escalating threats will be made even more complex by a more informed, empowered and outspoken global population, said Malik.

“Relationships between citizens and the state are changing. People are starting to demand more dignity, more jobs, and more space to convey their views”, he said.

This awakening political consciousness is largely due to increased access to education and the rise of information and communications technology (ICT), Malik added. He adds that “technology empowers people in a very profound way, and helps level out inequality”.

“That sense of empowerment is driving the world forward in complicated ways, some of which we do not understand fully. This is cause for optimism, but also poses a challenge,” he said.