Climate captives: Life and loss in the Mekong river delta

The growing impact of climate change on the people living in the Mekong river delta is the focus of Singapore-based photographer Oh Soon-Hwa's new solo exhibition.

Submerged up to her midriff in the muddy water of a mangrove swamp, Bong is collecting her catch for the day. The sky is overcast, and the Vietnamese shrimp farmer stares into the camera lens with an unreadable expression.

Bong is one in a growing number of people living along the Mekong river whose livelihoods are increasingly under threat because of climate change, and whom Korean photographer Oh Soon-Hwa has captured through the photographs in her latest exhibition.

Oh Soon-Hwa: Coastal Regions (Delta) records the sights and sounds of the artist’s trip through the delta regions of Vietnam where she met and documented the lives of the people there.

The Mekong, which begins in China, cuts through half of the 10 countries that make up Southeast Asia and provides sustenance for millions in Myanmar, Cambodia, Laos, Thailand and Vietnam. The river also has the highest freshwater biodiversity in the world and is home to freshwater dolphins and over 1,000 fish species including giant stingrays and giant catfish.

The delta is fertile and waterlogged, which has made rice-growing a suitable livelihood for the communities that live along the river’s lush banks. But despite the abundance of resources, life is hard. 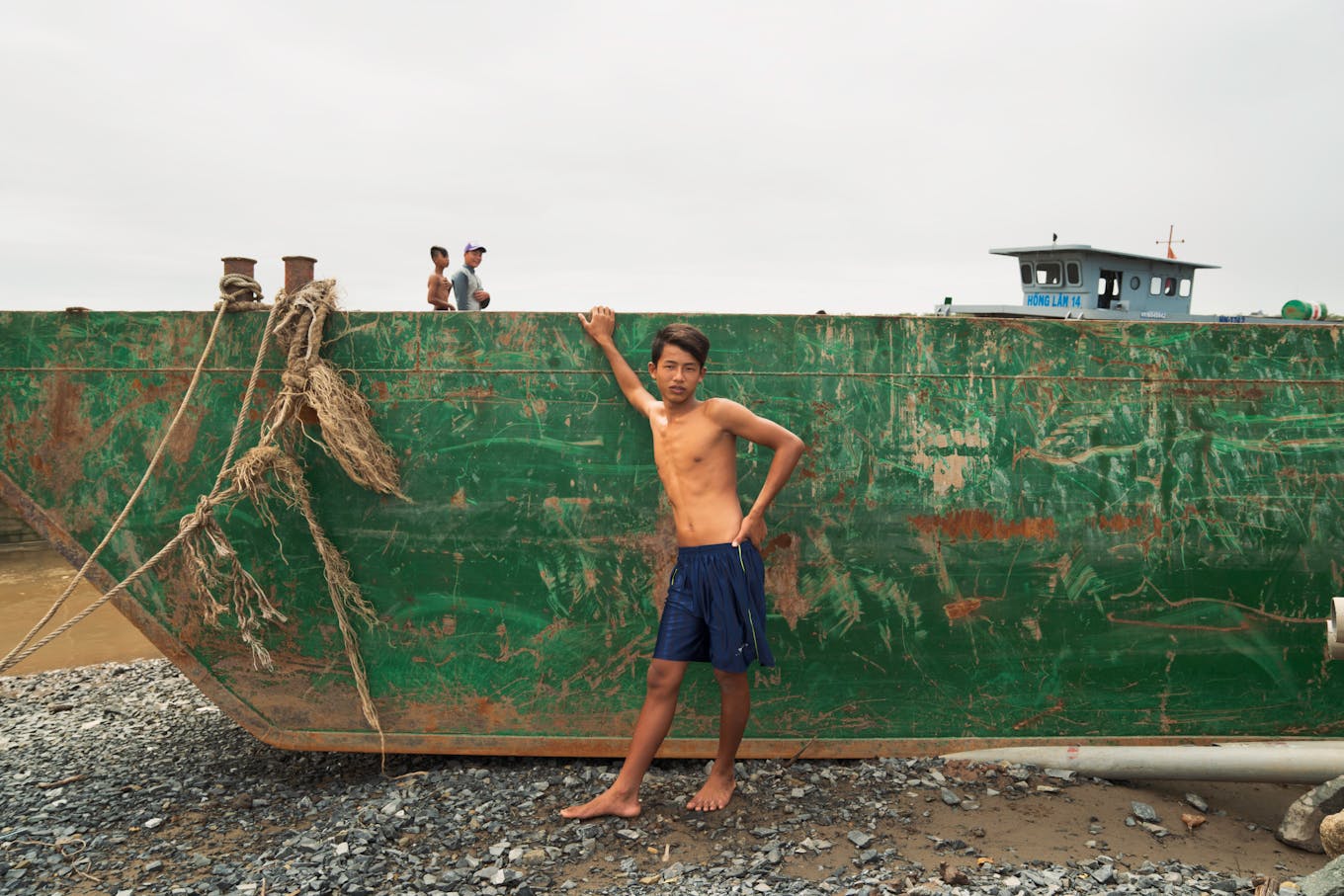 This 17-year old teenager works as a fisherman with his friends at Tran De estuary. Their main responsibilities are to fix gill nets on stakes and collect their catch every 3-4 hours. According to him, the amount of fish has decreased by nearly half in recent years.

Within the communities she visited in Vietnam, rising sea levels have brought increased salinity to the padi fields and fish farms and destroyed the farmers’ produce, putting them in debt, said Oh, who is also associate professor at the School of Art, Design and Media at Singapore’s Nanyang Technological University.

“Until recently, people used to fish during the wet season and farm rice during the dry season,” she explained. “But in recent years the weather has become unpredictable, just like the water flow.”

Those who were unable to eke out a living headed to the cities to look for jobs. “People there, in spite of the struggle to meet their daily needs, are very positive and show resilience in adapting to circumstances they have no control over,” she commented. 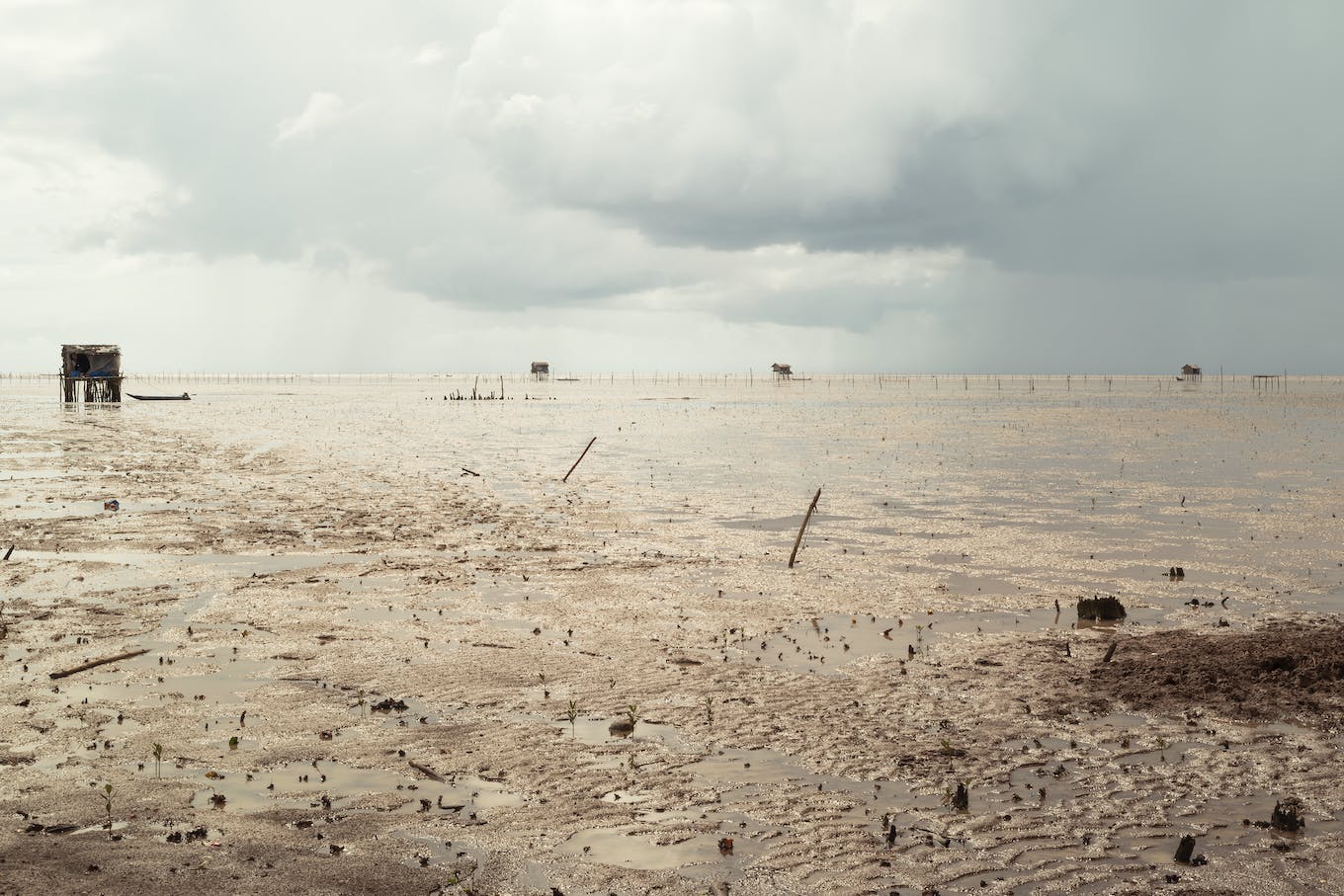 Land in this area was initially used for agriculture but rising sea levels caused by climate change have negatively impacted the livelihoods of the farmers.

Governments from both sides of the river have built - and continue to construct - dams to generate hydropower. Laos has even declared its intention to become the “battery of Southeast Asia” by selling hydropower to energy-hungry cities such as Bangkok, and drive its local economy at the same time. Vietnam suffered a searing drought last year due to the El Nino weather phenomenon that scientists believe is related to climate change, and the drought was exacerbated by the many dams along the Mekong.

“In order to adapt to the effects of climate change, many find alternative livelihoods such as shrimp farming. But trades like this may aggravate the effects of climate change.” For instance, shrimp farming has been shown to cause damage and pollution to wetland environments. Through her work on the project, Oh began to understand the complex relationship between man and nature.

Oh hopes that visitors to the exhibition will start to realise that “the effects of climate change are not as remote and abstract as we often picture them to be”.

“They affect the lives of many people and the environments in many countries around or next to us, such as in the Mekong delta area,” she said.

Oh Soon-Hwa: Coastal Regions (Delta) will run from Friday, March 17 to Sunday, May 14 at The Private Museum on Waterloo Street in Singapore. Entry is free. 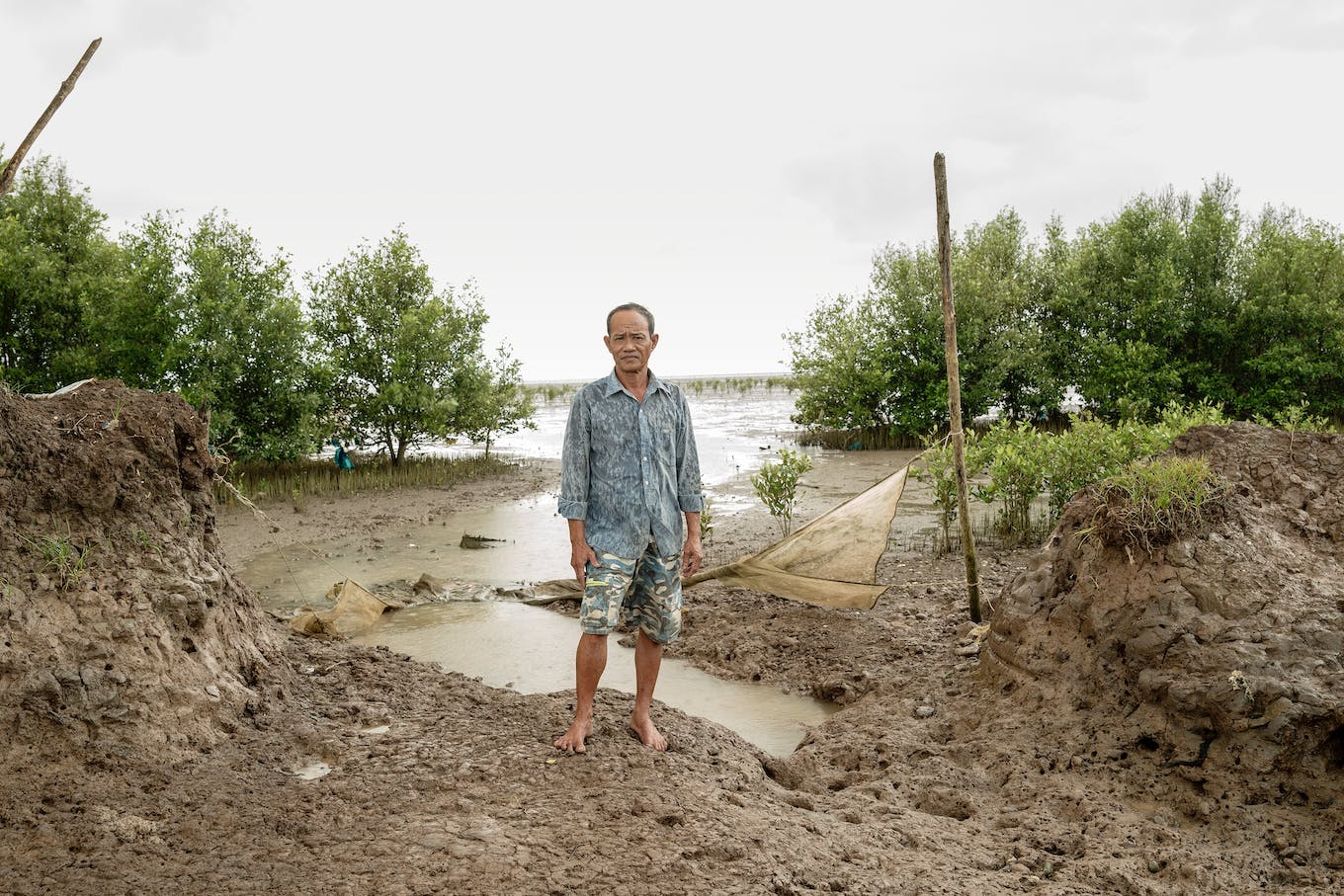 Mr. Huynh Van Minh standing between the broken dyke he built himself. He said that climate change has affected his livelihood as the tide continues to rise. 5-6 years ago, his house was built on land but now, it is built on stilts.