Cities can change the fate of the world's climate outlook: Christiana Figueres

The woman who led the world to its first deal on climate change now has a new mission: Stopping emissions from rising by 2020. Ahead of the upcoming MIECF 2018 event, she shares why cities hold the key to success for climate action.

One of the most iconic photographs from the signing of the Paris Agreement in the French capital in 2015 shows a row of United Nations officials and global leaders standing at a podium, joined hands raised in triumph as they celebrated the world’s first universal deal on climate change.

In the middle of this image, standing out from a sea of black in a light blue suit, is Christiana Figueres, the former executive secretary of the United Nations Framework Convention on Climate Change (UNFCCC). She is also the woman who led the complex and fraught negotiations among 195 global leaders to lock in a deal that will see the entire global community working to cap global warming at 2 degrees Celsius above pre-industrial levels, in a bid to avoid dangerous climate change.

More than two years have passed since that milestone global event, but the 61-year-old Costa Rican diplomat who stepped down from her UN post in mid-2016, has not let up on her efforts to rally people across the world to take strong climate action.

These days, she spends much of her time working towards a goal that is just as ambitious as herding 195 nations towards a common agreement: Ending the upward trajectory of greenhouse gas emissions and making sure they start to decline by 2020.

She is the convenor of Mission 2020, an organisation that aims to bend the curve of global emissions in the next two years, and also the vice-chair of the Global Covenant of Mayors for Climate and Energy, and a World Bank climate leader, among other roles. 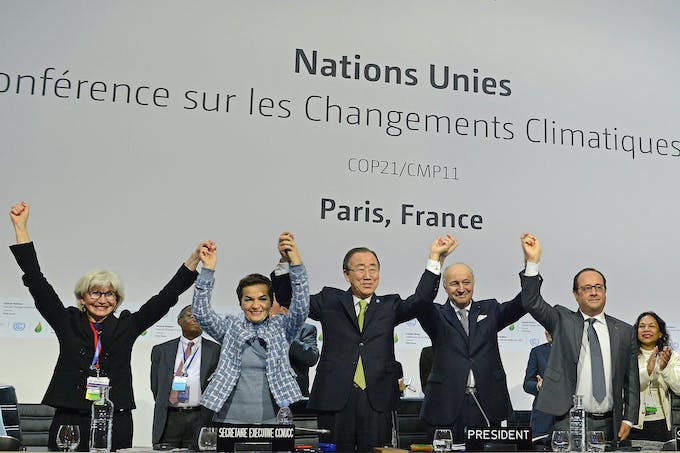 Christiana FIgueres, in blue, celebrates the signing of the Paris Agreement with UN officials and French diplomats in 2015. Image: UNFCCC

In a recent interview with Eco-Business, Figueres, who will be delivering the keynote address that the upcoming Macao International Environmental Co-operation Forum & Exhibition (MIECF) conference, says: “Cities are the key to the future of this planet, for two simple reasons”.

“First, almost three quarters of the world’s population will be living in cities within the next 20 years. Second, cities are from a regional perspective the highest emitters of greenhouse gases,” she says.

“If we do not create better cities, 80 per cent of global emissions could come from cities,” she adds.

Greenhouse gas emissions are not the only issue cities must contend with, Figueres adds. In addition to their growing populations and carbon footprints, urban areas struggle with challenges such as air pollution, inadequate transport and infrastructure, and food security.

But in the face of such an immense challenge lies a massive opportunity, says Figueres. “About 60 per cent of all the urban infrastructure we are going to need has not even been built yet,” she says. “There is an opportunity to make those cities much more sustainable, much more liveable, and certainly much more energy efficient.”

This is an idea mirrored in the theme of the MIECF 2018 event, “Shaping of eco-cities for an inclusive green economy”.

Climate change is already upon us. No country or city is exempted.

Located in the heart of what is known as the Pan-Pearl River Delta Region—which itself is one of the world’s most densely packed urban areas—the three-day event features a conference, an expo, and business-matching activities, all of which have a common goal: to explore the technological, policy, financial, and business solutions that can help solve the myriad challenges that cities face.

About 7,000 participants from 33 countries and regions attended the MIECF last year, with more than 450 exhibitors displaying solutions for sectors such as renewable energy, energy efficiency, air quality, green buildings, and environmental controls.

Figueres, who works with the Global Covenant of Mayors for Climate and Energy—an international alliance of cities and local governments committed to climate action—says that increasingly, cities around the world are realising that climate action is good for the economy.

She adds that Asian cities have the greatest and most urgent need to adopt “eco-city” solutions such as renewable energy, energy efficiency and sustainable transport. The region is expected to undergo the fastest demographic and economic growth in the world, research shows.

This could lead to the sharpest spike in carbon emissions if the region sticks to business-as-usual, notes Figueres. “However, some cities and some countries in Asia have already given signs that they are looking at a very different future,” she adds.

By scaling up clean energy and sustainable transport solutions across its cities, Asia has a golden opportunity to leapfrog traditional, fossil-fuel-powered energy and move straight into technologies which promote sustainable development, says Figueres.

She says: “Just like everyone has leapfrogged over landline telephony into cellphone telephony, it is now time to do the same with energy—and Asia can lead the way.”

Ultimately, there is no ignoring the problem, says Figueres.

“Climate change is already upon us. No country or city is exempted,” she says. “But while it is possibly the most daunting global threat of the century, addressing it through energy efficiency, renewable energy, and better transport can help convert the threat into an opportunity for growth.”

Find out more about MIECF and register for the event here.