Difficulty in obtaining financing, or sovereign guarantees from host nations, is impacting on the ‘bankability’ of BRI renewables projects, report finds.

Chinese renewable energy firms are booming at home but not overseas. Domestic solar and wind capacity have come on in leaps and bounds, with the proportion of coal power in the energy mix on the wane and a transition to low-carbon power clearly underway.

Yet overseas, and particularly in countries covered by the Belt and Road Initiative (BRI), China’s renewables investments are just getting started, and lagging far behind the country’s extensive coal power projects.

One important factor holding renewables back is financing. In late March, a report by Tsinghua University’s Research Centre for Green Finance Development and environmental thinktank Greenovation Hub, showed China’s overseas renewable projects face obstacles in the power markets of host nations, and that finance is difficult to obtain and expensive.

The report recommends that China helps BRI nations improve how they develop their renewables sectors, and that Chinese financial institutions gradually reduce support for coal power in those nations, freeing up resources to support Chinese renewables firms expanding overseas. 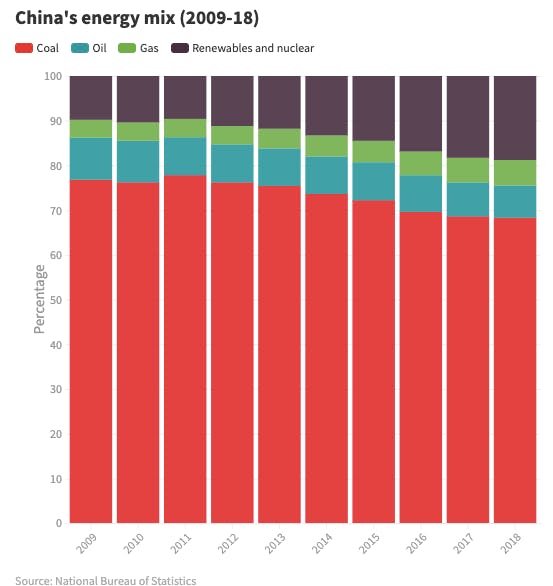 Renewables on the Belt and Road

Building energy infrastructure is at the heart of the BRI. While the initiative has seen strong growth in China’s overseas investments in wind and solar power since its launch in 2013, fossil fuel projects still account for a big proportion of its energy projects.

Figures compiled by Greenpeace from publicly available data show that between 2014 and 2018 Chinese equity investments built 1,277MW of new solar capacity in BRI nations, 2.8 times the figure for the previous five years. Wind power capacity totalling 432.5MW was built over the same period.

Financial institutions need to promote the implementation of the Green BRI through their services.

A report published last year by Tsinghua University, Vivid Economics and ClimateWorks Foundation found that if the 126 BRI nations do not cut emissions, global temperatures will rise to 3C above pre-industrial levels, regardless of what action other countries take.

This is far above the 2C upper warming limit of the Paris Agreement. China’s infrastructure investments have a huge impact on the carbon pathways of those nations.

At an online seminar held on 27 March by Tsinghua’s Research Centre for Green Finance Development and Greenovation Hub, Ma Jun, chair of the China Green Finance Commission, said that responding to climate change requires faster low-carbon investment in BRI nations, and that means large-scale funding from the financial system: “Financial institutions need to promote the implementation of the Green BRI through their services.”

The seminar was held to mark the publication of the new report, which examined 14 Chinese-invested overseas renewables projects and interviewed companies and financial institutions involved, to identify obstacles to renewables financing in BRI nations.

“Recognition of the bankability of BRI renewables projects amongst financial institutions remains low,” said Tong Jiangqiao, a visiting scholar at the Research Centre for Green Finance Development and one of the report’s lead authors, during the seminar.

Between 2008 and 2018 prices for solar cells and onshore wind turbines fell significantly, bringing the cost of renewable power down. But it remains harder to fund such projects in BRI nations than in developed nations.

The report points out that: “Lower power prices in BRI nations due to intensive competition during project bidding, a lack of sovereign guarantees from host countries, and incomplete policies on take-up and pricing for renewable energy all impact on the ‘bankability’ of BRI renewables projects.”

Power pricing mechanisms are a crucial factor in bankability. Although a few nations, such as Vietnam, have renewable energy subsidies similar to those in China, which reward renewable energy producers with a premium for their electricity, many BRI countries set power prices through public bidding.

During the online seminar, Tong Jiangqiao pointed out that financial institutions place great store in power prices and payment guarantees, as these determine a project’s future cashflow. In many BRI countries, the economic viability of renewable energy projects needs to be benchmarked against that of coal power.

Many BRI projects are underwritten by the domestic assets of the Chinese firm – which are used as collateral for a loan to be spent overseas. If repayments are not made, the financial institution can pursue those assets.

But as the report points out, this form of corporate financing is booked as a potential liability on company accounts and the assets are no longer available to underwrite other loans.

And with Chinese companies in general heavily leveraged currently, they are unable to take on further liabilities. This is particularly the case for private firms, which have fewer assets.

Private firms are very active in China’s renewables sector, particularly in solar power. As of 2018, over two-thirds of China’s solar power farms were privately owned. But delays in payments of renewable energy subsidies have left many facing cashflow difficulties and unable to underwrite or invest in overseas projects.

Sun Yibo is international projects and structured finance director at Jinko Solar, China’s largest private solar power firm. He said during the seminar that when Jinko requests funding for overseas solar projects from China’s policy banks, collateral using corporate assets is always requested, regardless of how the financing is structured or the risk is distributed. “And that’s a bit difficult for us private companies, as it impacts on the whole balance sheet,” Sun said.

The report also points out that high levels of debt mean some BRI countries are unable to provide sovereign guarantees for energy projects – including renewables. Such guarantees are often requested by Chinese financial and insurance institutions as a condition of loan support.

And it is even harder to obtain sovereign guarantees from the host nation for renewable energy projects, which tend to be smaller and have less government backing, making financing yet more difficult.

“When investing overseas, we need to be actively involved in policy-setting for wind and solar development in Belt and Road countries,” Tong Jiangqiao said during the seminar. “Some international organisations and multilateral institutions are very good at this, and we should help host nations build capacity in policy design.”

One Chinese thinktank has already suggested China could aid growth of the sector by funding renewable subsidy mechanisms in BRI countries via overseas aid.

A loan from a Chinese bank and insurance from Sinosure remains the financing model for most projects. The lending bank often requests the borrower to take out export credit insurance with Sinosure, to cover exposure to political and commercial risk. But Sinosure has already used much of its quota for mid- and long-term insurance on overseas coal power projects, taking up insurance that could have been used for renewables.

Bai Yunwen, director of Greenovation Hub, says that Chinese financial institutions need more encouragement from policymakers to support overseas renewables investments. For example, the People’s Bank of China includes domestic green loans and bonds in its macro prudential assessments (MPAs) – but not those issued overseas. “The inclusion of green credit in MPAs spurred the banks on,” said Bai. She thinks the China Banking and Insurance Regulatory Commission should calculate statistics on banks’ overseas green lending amounts and growth rates and include these in MPAs.

During the seminar, Ma Jun pointed out that China could encourage – or even require – financial institutions to carry out environmental stress testing on the make-up of its financing, encouraging them to increase green lending for BRI investment and creating a better financing environment.