China’s economy is recovering quickly, as are its carbon emissions

Big investments in traditional infrastructures are driving the economy, but a path to green growth remains open.

Macroeconomic data for the first half of 2020, published on 16 July by China’s National Bureau of Statistics, revealed a striking recovery. Second quarter GDP growth turned positive, with figures for industry, investment and consumption all looking strong.

But China’s carbon emissions have grown in step with its economic recovery. Emissions in May were higher than the same month last year, and growth continued in June. Since the outbreak of the pandemic the government has issued 4.75 trillion yuan (US$683 billion) in local and national debt with a focus on encouraging infrastructure projects. Energy-intensive, high-carbon sectors are driving both the recovery and the emissions. Will China’s economic stimulus lead to record high carbon emissions this year?

China’s recovery occurred mainly in the second quarter, after the Covid-19 pandemic had been brought under control. GDP growth returned, with an increase of 3.2 per cent year-on-year, with improvements in both industry and services.

Monthly investment figures show that rebound was mostly driven by industrial output and traditional infrastructure. Investment in fixed assets and infrastructure saw strong growth in both April and May, giving a clear V-shaped recovery. Infrastructure investment was up 8.3 per cent year-on-year in May, to the highest level of the past 12 months.

In comparison, and despite notable growth in the second quarter, the retail sector was still growing more slowly in June than in the same month last year. Meanwhile, services grew much more slowly than manufacturing or construction. 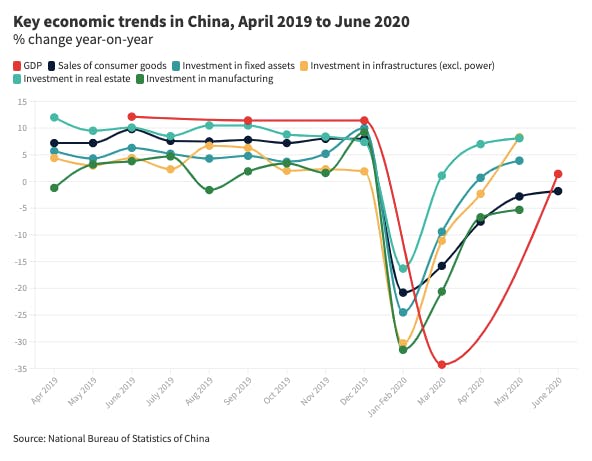 As of the end of June, 63 per cent of funds from local government special bonds had gone to infrastructure investments, primarily in transportation, civic infrastructure and industrial parks, according to figures from GF Securities. Media reported the Ministry of Finance saying that 700 billion of the 1 trillion yuan in national special bonds can be used as capital for infrastructure construction (the remainder is to be used for general pandemic-related spending).

The ministry’s list of 12 sectors in which that money can be spent includes non-traditional infrastructure projects in public health, pandemic response measures, emergency stockpiles, food security and environmental protection. But it also includes sectors that may cause high carbon emissions: remodelling and rebuilding old residential communities, transportation infrastructure, civic infrastructure and infrastructures for major regional planning. 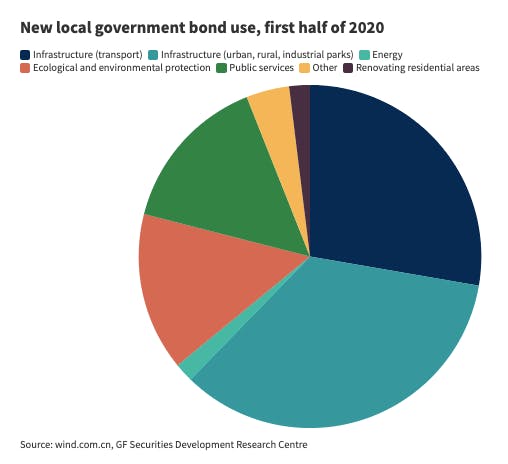 Carbon concerns and the recovery

After a brief drop, China’s carbon emissions have rebounded strongly, in line with the economy and mainly due to the recovery in energy-hungry and carbon-intensive industries.

In February, during the worst of the pandemic, work and travel restrictions caused a brief emissions drop. But once work resumed and economic stimulus measures took effect, there was a quick reversal. Carbon Monitor data shows that by April daily emissions had returned to 2019 levels. According to calculations from the Centre for Research on Energy and Clean Air, in May China’s fossil carbon emissions were up 4-5 per cent year-on-year, partially cancelling out the earlier drop in overall emissions.

Data from carbon-intensive sectors offers further confirmation emissions are on the rise. National power generation was up 6.5 per cent year-on-year in June, and while wind power is making a greater contribution than before, thermal power, which is China’s main type of power, saw first year-on-year rise in April and was up by 9 per cent and 5.4 per cent year-on-year in May and June. Output of energy-intensive construction materials such as cement, steel and plate glass rebounded in March and April, with cement production hitting annual highs in May and June, and steel output close to doing so.

Window for green growth open through 2021

But economic growth alone is not the government’s main post-pandemic target. The government’s report to the National People’s Congress in May did not include a GDP growth target – the first time this has been omitted – and instead stressed employment and poverty-reduction, with the aim of stabilising the foundations of economic growth.

The signs all show that despite the downward economic pressures, the government still wants a green recovery and transition. In June, the National Development and Reform Commission (NDRC) reaffirmed local government targets for reductions in coal power capacity, stressing its determination to see green and low-carbon development.

With targets set in the 13th Five Year Plan (2015-2020) for solar and wind power capacity – 110GW and 210GW respectively – being hit ahead of schedule the NDRC and the National Energy Administration further raised them in June, aiming to bring both wind and solar to around 240GW by the end of 2020. Achieving this would mean adding a total of 65GW of wind and solar capacity this year, 24 per cent more than in 2019.

China’s government is looking for new growth points and opportunities for establishing its new competitive advantages. In early March, a meeting of the Standing Committee of the Central Political Bureau called for “faster construction of neo-infrastructure such as 5G networks and data centres.” This digital “neo-infrastructure” push can be seen as an attempt by the government to move beyond a reliance on traditional industries and infrastructure to boost the economy.

Ultra-high voltage power lines, intended to bring renewable power generation to the grid, is set to receive 180 billion yuan in investment. CCID Consulting, a subsidiary of the Ministry of Industry and Information Technology, calculates 2020 investment in data centres could reach 416.68 billion yuan.

This provides some hope for the next stage of China’s low-carbon growth.

Meanwhile, international bodies such as the UN and the International Energy Agency are offering the world a sustainable recovery model: sustainable energy such as wind and solar, energy-saving retrofits of buildings, power grids, low-carbon forms of transport including EVs, light rail and public transport, industrial energy-saving and energy-efficiency measures, and biofuels could all be used to provide a post-pandemic economic stimulus.

New investment in these fields would provide economic growth and jobs, while also reducing emissions and pollution. Globally, how to emerge from this crisis with more resilient and sustainable growth will test the wisdom and foresight of our governments. China, having emerged from the pandemic first, should have both the determination and time to unlock the growth potential of sustainability for a more stable future.