Despite the setback, the world’s biggest coal user claims it is still on a path towards clean energy.

China’s coal consumption rose 0.4 per cent year-on-year in 2017, ending a three-year period of decline but the uptick was still well below the 2013 peak in coal consumption, according to an annual report released today by the country’s National Bureau of Statistics (NBS).

Overall, the small uptick in coal consumption is an aberration that will not derail China’s path towards a low-carbon economy, experts told chinadialogue.

The weight of coal in the country’s energy mix has fallen to 60.4 per cent from 62 per cent in 2016, despite a 2.9 per cent rise in total energy consumption.

It is also revealed that the share of clean energy (as defined by the NBS) in China’s energy mix, which includes sources such as wind, solar, and also natural gas, expanded from 19.7 per cent to 20.4 per cent.

This was driven by increases of 21.4 per cent and 38 per cent in wind and solar energy output, respectively, as well as a 14.8 per cent rise in natural gas consumption, the result of a massive campaign to switch heating systems from coal to natural gas.

We stick to our conclusion made in 2016: Coal-fired growth is over.

Tim Buckley, a climate finance expert with the Institute for Energy Economics and Financial Analysis, told chinadialogue that short-term conditions, including economic stimulus ahead of the 19th Party Congress, coupled with poor hydropower production in the same period, were responsible for the slight rise in coal consumption. 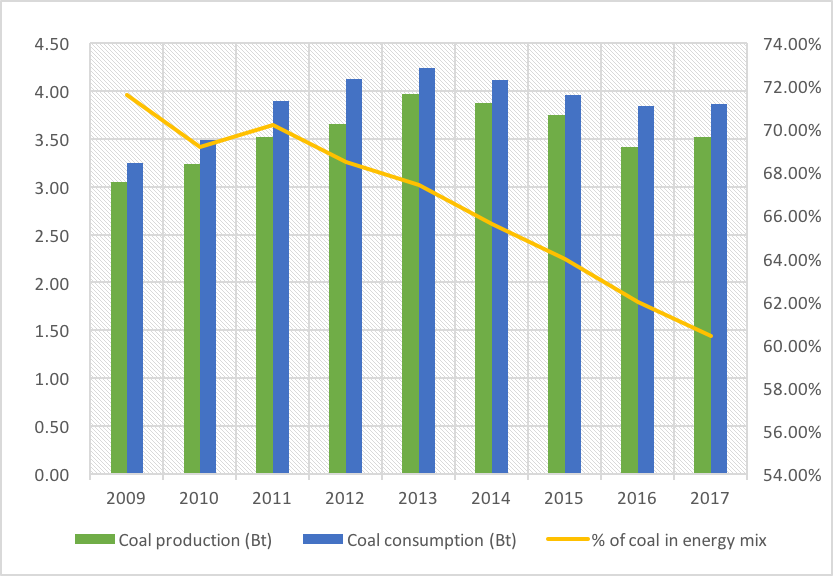 Yuan Jiahai, professor at the Northern China Electricity and Energy University, said that from late 2016, provincial governments embarked on a massive wave of investment in infrastructure and real estate, which prompted a recovery in energy- and coal-intensive industries such as steel and cement.

Under these economic initiatives, power generation and coal production soared for most of 2017, before slowing towards the end of the year.

However, the slight rise in coal consumption is not expected to last given China’s continued economic reforms and energy transition. This means there is little chance for sustained coal growth.

Xu Zhaoyuan, head of the research office at the State Council Development Research Centre’s Industrial Economy Research Department, says the 0.4 per cent uptick is a short-lived fluctuation, predicting that coal demand will decline in coming years, and the peak in coal consumption in 2013 will not be exceeded.

The extension of current measures to prevent and control air pollution in 2018 and beyond, as well as the state’s continued push to develop renewables, mean that momentum for China’s energy transition will remain, including the on-going switch of heating from coal to natural gas, and the end to usage of loose coal, noted Xu.

Furthermore, China’s real estate development, which is a major driver of coal use, is facing restrictive regulations by central and local governments, noted Qi Ye, senior fellow and director at the thinktank Brookings-Tsinghua Centre.

“The traditional drivers of coal growth—construction and manufacturing—will continue to give way to the service sector in economic growth,” said Qi. “We stick to our conclusion made in 2016: Coal-fired growth is over, despite the fact that coal remains the primary fuel for the Chinese economy.”

Growth in coal consumption is not sustainable because much of the coal has been stocked in anticipation of further price hikes, and actual coal use could have been less, according to Yuan Jiahai.

He predicts that coal demand and total energy consumption in China will not see the same strong growth as 2017. “We are looking at primary energy consumption around 1.5 per cent for the years to come. The kind of growth we saw in 2017 will not be repeated,” said Yuan.

Many believe that coal consumption in China has already peaked despite fluctuations.

“It may not be a ‘pointed’ peak per se, but coal consumption has already reached a plateau,” noted Liu Qiang, an economist with the China Academy of Social Sciences.

Still, the 2017 coal consumption figure will serve as a reminder that the path towards a clean energy future will not be easy for the world’s biggest coal burner.

The urge to boost economic growth through energy-intensive infrastructure investment still exists in provincial authorities, said Xu Zhaoyuan, which will have to pay more attention to the quality of economic development. Apart from that, new tools and measures such as the national emissions trading scheme and marketisation of electricity distribution must be used to promote higher energy efficiency.

The coal consumption increase is a sign for China that “there is still much more work to do to push forward its clean energy transition”, said Alvin Lin, China climate and energy policy director with the Natural Resources Defense Council.

He believes that the world leader in renewable energy production and electric vehicle uptake is firmly on a path toward clean energy, “but the next few years will require the deepening and successful implementation of its climate and clean energy ambitions”.

This story was originally published by Chinadialogue under a Creative Commons’ License.