China was behind a climate-crunching increase in coal power capacity in 2019, and the Covid-19 pandemic is likely to make Chinese policymakers determined to see these investments through. But globally the writing is on the wall for the world's dirtiest fossil fuel as new coal development slumped.

More coal power capacity was installed in 2019 than in any year since the Paris climate accord, according to a new report from a coalition of energy monitoring and green groups.

This was mainly the result of a big coal power installation drive by China. Two-thirds of new coal capacity globally in 2019—some 34.1 gigawatts (GW)—took place in a country that is already the world’s largest carbon emitter, the report, titled Boom and Bust 2020: Tracking The Global Coal Plant Pipeline, found.

Outside China, however, the global coal fleet shrank for the second year in a row, with more coal power capacity (27.2 GW) retired than commissioned (24.5 GW).

No other country retired more coal-fired power plants than the United States in 2019. Despite the pro-coal rhetoric of Donald Trump, coal plant retirements have increased 67 per cent during his presidency compared to the era of his predecessor, Barack Obama.

Overall, coal power generation fell 3 per cent globally last year, with a 16 per cent decline in the US and a 24 per cent fall in the European Union. It was even down in India, a country heavily reliant on the fossil fuel, by 3 per cent, according to the report by Greenpeace, the Sierra Club, the Centre for Research on Energy and Clean Air, Global Energy Monitor.

As [China’s] policymakers look for ways to stimulate the economy after the coronavirus crisis, a wave of new coal plants would be the worst kind of waste.”

The clearest sign that the world is moving away from coal—which is the single biggest cause of man-made greenhouse gas emissions—is that fewer new coal plants are starting to be built. Coal capacity under construction fell 16 per cent from 2018 to 2019, with declines even in China and Southeast Asia.

A rise in opposition to coal from civic society groups, stronger competition from renewable sources of electricity, and a falling willingness among financial institutions to finance coal have driven the fall in new coal development, the report noted. 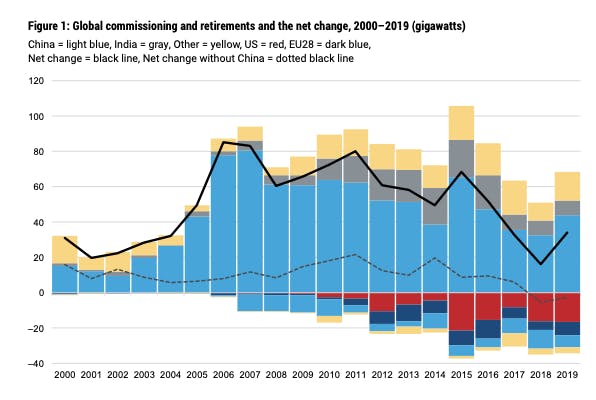 It is not only China bucking the global trend against coal

China’s coal capacity push is the result of a raft of plant permits approved between 2014 and 2016 that are now coming online, the report’s authors noted.

Lauri Myllyvirta, lead analyst for Centre for Research on Energy and Clean Air, said that even though the new plants going online will lead to an overcapacity in coal power, China’s coal lobby is pushing for hundreds of new coal-fired power plants by 2030—the year by which greenhouse gas emissions need to be dramatically reduced to cap global warming in line with the Paris Agreement.

The economic turmoil caused by the ongoing Covid-19 pandemic will make China‘s policymakers even less willing to interfere with any capital spending on coal plants, “no matter how poorly justified,” suggested Myllyvirta.

”As policymakers look for ways to stimulate the economy after the coronavirus crisis, a wave of new coal plants would be the worst kind of waste. Both China’s climate pledges and the increasing competitiveness of clean energy technologies mean that clean energy installations will accelerate, leaving no space for coal-fired generation to grow.”

China, which is home to about half of all global coal power capacity, is not the only country bolstering the coal economy. As Europe and the US shift away from the fossil fuel, the largest driver of new coal power in the Organisation for Economic Co-operation and Development (OECD), a club of wealthy countries, is Japan.

Asia’s second largest economy has 11.9 GW of coal power under development domestically that would increase lifetime carbon dioxide emissions from its existing coal fleet by 50 per cent, from 3.9 to 5.8 billion tonnes. Overseas, Japan’s banks are behind 24.7 GW of coal power, larger than the entire coal fleet of Australia.

Is Southeast Asia the last hope for coal?

Southeast Asia is known for being the only region in the world where coal is growing in the energy mix, particularly in energy-hungry economies such as Vietnam, Indonesia and the Philippines. Some 67.9 GW of coal power has been commissioned in the regional bloc since 2000, three quarters of which has come online since 2011. Since Southeast Asia’s coal flow is so young, zero coal-fired power plants have been retired since 2000, the report’s data showed. 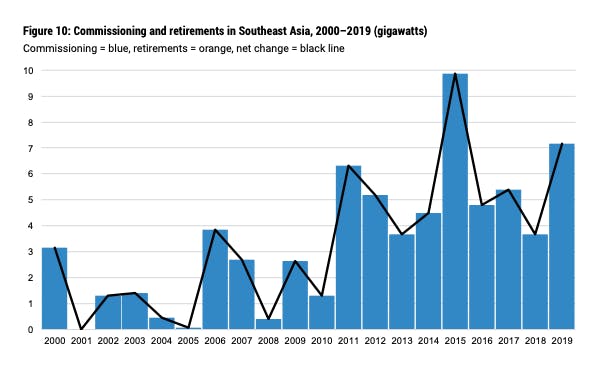 The region’s biggest energy consumer, Indonesia, has commissioned 21 GW of coal power capacity since 2010 and has 11.8 GW under construction—amounts exceeded only by China and India. Vietnamese coal capacity has grown faster than almost anywhere, adding 76 per cent (14 GW) of its 18.4 GW of coal-fired capacity in the past six years.

But even in Southeast Asia, coal’s rate of growth shows signs of slowing. Coal project construction starts have fallen 85 per cent over the last three years, from 12.8 GW in 2016 to 1.8 GW in 2019, with a particularly big drop in Vietnam.

Across Asia Pacific, the biggest growth in coal plant construction starts took place in South Asia, led by India. But an increase in new plant development also took place in OECD countries, as a result of new plants being built in South Korea, Japan, and Turkey. 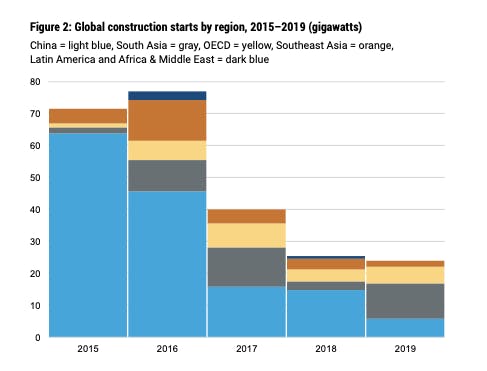 According to the Intergovernmental Panel on Climate Change, coal power use needs to fall 80 per cent by 2030 to keep global warming below 1.5°C, and avoid the worst consequences of climate change.