Vedanta Resources is no mining minnow. Listed on the London Stock Exchange, it is a global, diversified company with operations in India, Sri Lanka, Zambia, Namibia, South Africa, Liberia, Ireland and Australia, with interests in zinc, lead, silver, copper, iron ore, aluminium, power, oil and gas. As the world’s largest integrated zinc-lead producer, it boasts among its key assets the world’s largest zinc-lead mine, Rampura Agucha. It is also the largest private sector producer of iron ore in India, and owner of Cairn India - the fastest growing energy company in the world.

All this puts Vedanta in a prime position to benefit from booming demand in Asia’s third largest economy: in the first quarter of 2014 alone, according to the Financial Times, India’s GDP expanded by almost 6 per cent. And it is this growing market demand for Vedanta’s products that frames the view of Tom Albanese, incoming chief executive of Vedanta and its India-focused subsidiary Sesa Sterlite, when it comes to the company’s corporate social responsibility (CSR) challenges.

“There is strong, long-term, enduring demand for what we produce,” Albanese says.

“My long-term vision for Vedanta is to be seen as a leading supplier of natural resources and meet higher levels of global wealth and lifestyle as well as rising expectations about water, community engagement and health and safety. The markets are there for us if we can properly manage quality and meet today’s and future expectations.”

With growth comes visibility, and these expectations are changing along with Vedanta’s expanding role as an industry major. As a global player, Vedanta must play by global standards, and this lies at the heart of Albanese’s approach. Before taking up the reins as Vedanta’s chief executive in April this year, he held the top job at rival mining giant Rio Tinto, and brings to his new job a sound understanding of the extractive industry’s key CSR risks.

Six months is not long, but already the newcomer is crystal-clear on his number one sustainability priority: improving Vedanta’s health, safety and environment (HSE) record.

Albanese doesn’t mince his words. “We have a safety challenge. We have a safety record that we’re not proud of,” he says. “I’ve told the board it is not acceptable. I’ve made it one of my own responsibilities to improve this.”

His strategy? To bring the company into a position “where it is seen to match expected global rather than local norms.” In other words, to align Vedanta with global industry best practice.

This requires culture change and intense focus from the top, but Albanese is confident Vedanta can live up to its aspiration of “zero harm” and is “very impressed” by his team’s willingness to aim for best practice.

Our Journey Towards a Sustainable Future, Vedanta’s Sustainable Development Report 2013-14, notes a fall in the number of Category 4 and 5 environmental spillages and a 37 per cent reduction in lost-time injury frequency rates over the past four years, so the trend is in the right direction.

But the company definitely has a way to go, especially with rolling out best HSE practices to contractors – a yawning gap in the 2013-14 sustainability report that Albanese is aware of.

“It’s where all the mining companies see a higher level of safety problems, when people come in without the training our employees have,” he says.

Vedanta founder and executive chairman Anil Agarwal agrees. In the 2013-14 sustainability report, Agarwal writes: “The most important area where we must do better is in our employee and contractor fatalities, and both Tom and I share the view that the current fatalities and safety performance need to be improved drastically.”

With some 75 per cent of Vedanta’s effective labour force contracted out, this is a critical key performance indicator for future reports, along with human rights awareness and anti-corruption. Vedanta is currently conducting a gap analysis on compliance with the UN Convention on Human rights to become a signatory.

As an extractive company active in developing economies, contributing to local communities is a huge part of Vedanta’s CSR approach.

In 2013-14, the company poured some US$49 million into community development, and here, Albanese is upbeat. “I think we’ve done a very good job on CSR,” he says. “Over 4 million people have been touched by Vedanta’s programmes in education, housing, or women’s education. These are strong CSR programmes, as strong as I’ve seen for any of the mining majors.”

But Vedanta faces fierce criticism from NGOs such as Amnesty International and grassroots activists.

Indeed an entire website, www.foilvedanta.org, is devoted to the company’s alleged misdemeanours, ranging from pollution and illegal mining to human rights abuses and tax evasion. Addressing these concerns head-on and rebuilding corporate reputation is a must if Vedanta wants a place at the best practice table and a clear licence to operate.

Albanese is working on spearheading a cultural shift in the organisation to engage with local communities and earn consent.

He says: “Over the last few months, we’ve recognised that we won’t develop until we have the consent of communities. This is an important change and achievement – we’ve had important projects held up because we were not meeting stakeholder expectations, so I see a direct contribution to the bottom line.”

He intends to move the company into a place “where we engage more with the global civic community and non-governmental organisations” and build more partnerships. It may be too early for the “trust” word, but Vedanta’s chief executive grasps the nature of the challenge.

He says: “In the resources sector there will always be differences of opinion with civil society, so it has to be about how we deal with those relationships. We may not agree all the time, but we have to have mutual respect.”

Towards a sustainable society?

Vedanta’s business strategy is to combine growth with long-term value and sustainability. But what does this mean? “To ensure a long-term future of the Group,” the company states, “we aim to grow our reserves and resources at a faster rate than we deplete them through constant exploration and acquisitions.”

That kind of limitless growth inherently contradicts most accepted definitions of sustainability. To his credit, Albanese gets this. He says: “There are limits on how using non-renewable resources can meet the definition of sustainability – the very nature of our business is that we’re extracting something that’s not renewable in anyone’s lifetime. But that being said, we’re also in the business of providing enduring value over a long period. Mining can create sustainable outcomes.”

For Albanese, sustainability is about doing business with a smaller footprint, empowering employees, making sure communities are comfortable with, and benefit from, the company’s presence. “It’s about a sustained effort, looking away from quick wins, a multi-year journey.” 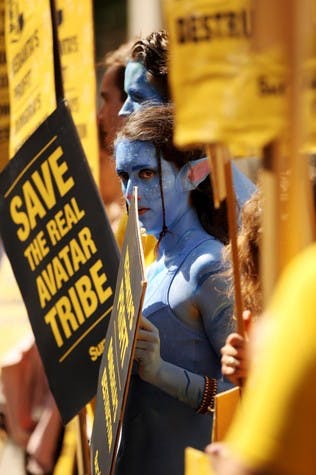 2010 - Amnesty International, Human Rights Watch and ActionAid join celebrities Bianca Jagger, Michael Palin and Joanna Lumley to campaign against a proposed bauxite mine in Nyamgiri Hills, Orissa, homeland of the Dongria Kondh people.In recent years, Vedanta has come under fierce criticism from NGOs for health, safety and environmental violations across its operations and those of subsidiaries.

To hear more about Vedanta’s sustainability commitment, have a look at the Responsible Business Summit Asia on May 6-7, Singapore. You will hear from Vedanta Group’s Group Communications, Sustainability & CSR President Roma Balwani about how to drive the sustainability agenda forward through improved industry collaboration and effective stakeholder engagement. Download the Summit’s programme here for free.