Can the palm oil sector do more with less to save Indonesia's forests?

A ban on the expansion of Indonesia's palm oil sector has yet to take effect. What’s the hold-up, and what can the sector do to improve productivity to safeguard the region's precious rainforests?

More than two years after Indonesia announced a moratorium on expanding oil plantation concessions, efforts to put the ban into effect are being held up by several conflicts of interests, according to Fawziah Selamat, deputy director sustainability, at thinktank Singapore Institute of International Affairs (SIIA).

“There has been a lot of lobbying against the moratorium by palm oil companies,” she told Eco-Business. “At the same time, non-government organisations have criticised drafts of the moratorium saying two years [for the ban to take effect] is not long enough to turn around large-scale deforestation.”

She said that the moratorium—which was first announced by Indonesia’s president Joko Widodo following the 2015 haze crisis—is likely to have been delayed because no party has been satisfied with the drafts.

Southeast Asia’s worst haze crisis on record, the 2015 calamity, resulted in an estimated 100,000 premature deaths in the region due to smoke exposure caused by slash-and-burn land clearing to make way for palm oil plantations. That year, the haze released more carbon dioxide into the atmosphere than the emissions of the European Union.

The decree is an effort to curb deforestation and climate change while encouraging plantation owners to increase their productivity and grow more using their existing lands, said Dr Bambang Brodjonegoro, Indonesia’s Minister of National Development Planning, at the 5th Singapore Dialogue on Sustainable World Resources. Themed Climate Action: Seeding Green Growth and Resilience in ASEAN, the event was hosted by SIIA in May this year.

Once signed, the moratorium will not only freeze new permits in the world’s biggest palm oil-producing country, but also mandate a review of existing concessions as well as those currently being processed.

That the act has yet to take effect may indicate that it has moved down the agenda of the current Jokowi administration, especially since the government has been able to stop the onset of major haze episodes since 2015, Selamat told Eco-Business. In February this year, new palm oil permits were issued in Papua.

Selamat also explained that the moratorium had been expected to take effect before Indonesia’s regional elections at the end of June. This would have effectively prevented incumbents from issuing palm oil permits, which have been known to be linked to corruption, to either fund their political campaigns or gain favour with influential business people, she said.

With rising consumer demands for sustainable production, the palm oil sector has been under increasing pressure to address the various social and environmental ills it is linked with to clean up its supply chain.

“Consumers have started demanding change in the way plants are grown,” said Simon Lord, chief sustainability officer at Sime Darby Plantation, during a panel discussion themed Doing Well By Doing Good: The Evolution Of Sustainability In The Agri-Business Sector at the 5th Singapore Dialogue on Sustainable World Resources, adding that only ten years ago there had been no questions over the sustainability of the palm oil sector.

However, despite various sustainability initiatives launched by palm oil traders in recent years, many of the issues at play have persisted because of the multilayered complexity that permeates palm oil production.

About 40 per cent of Indonesia’s palm oil is farmed by large numbers of smallholders who produce fresh fruit bunches for independent mills, making supply chains very hard to manage. Smallholder plantations are known for their low productivity and poor crop quality, which makes their plantations prone to deforestation and social conflict in their struggle to fulfil their basic economic needs.

When children help their parents outside of school time, is that child labour?

A recurrent theme at the event was the need to support smallholders in tackling these issues through capacity-building and access to finance, which would enable them to abandon outdated agricultural practices and purchase the fertiliser and high-quality seed stocks needed to significantly raise productivity.

In February, GAR announced that it had finished mapping all of its suppliers to the 44 mills that it owns, and a plan to achieve full traceability for the remaining 427 independent mills by 2020.

Commenting on the likelihood of achieving the 2020 traceability target, Purnomo said that it is impossible to tell whether or not the company will be successful, such is the complexity of the challenge.

Addressing the issue of child labour on oil palm plantations, Lord shared: “I’d like to put my hand on my heart and say every square metre of land we control has got zero deforestation and zero exploitation. I think I’m fairly clear about deforestation, but exploitation is something that can be okay today and not tomorrow.”

“It is a constant battle to maintain vigilance but it is hard to make sure every individual manager is behaving correctly,” he said. 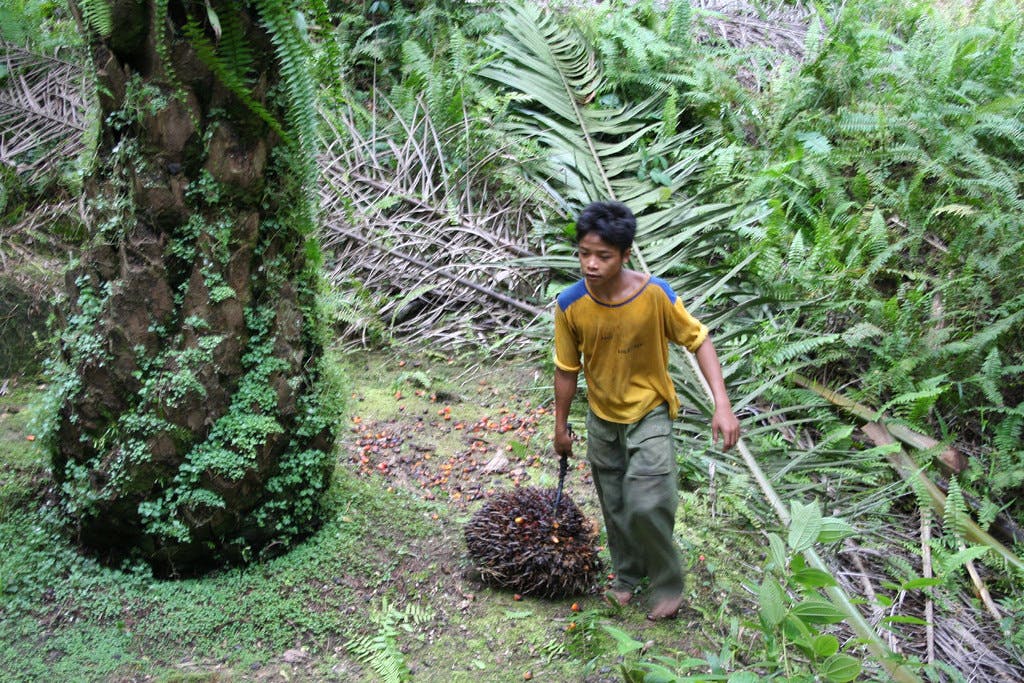 “I don’t believe there is child labour in any of our plantations, but I do believe that children are working in the smallholder sector. Just saying that they should not be working is not the solution. They should be at school,” Lord added.

“One issue is understanding the definition of child labour. When children help their parents outside of school time, is that child labour?” challenged Purnomo, stressing that the sector and the Roundtable on Sustainable Palm Oil (RSPO) needed to address this grey area.

A lack of transparency

Untangling the complexities of the sector would be a big step forward in addressing some its problems, and improving collaboration and sharing knowledge among stakeholders would be one way to do so, said Mark Wakeford, chief executive officer and executive director of Indonesian palm oil firm Indofood Agri Resources (IndoAgri), at the event.

In recent years, IndoAgri has faced criticism over labour rights violations and deforestation on its plantations, resulting in a number of firms cutting ties with the firm including PepsiCo.

Stressing the lack of transparency of the accusations levelled at plantation companies, he said that often NGOs refused to cooperate and share critical information about their findings that would help companies tackle these issues.

“We know we have to improve, but if you make allegations, don’t sit behind a report and say nothing. It won’t help us move forward,” Wakeford said.