Marketers are usually blamed for driving overconsumption and persuading people to buy stuff they don't need. But their creativity could hold the key to solving Asia's plastic pollution crisis, experts said at a recent event in Singapore.

If Asia’s marketers and designers were aware of the impact plastic packaging had on the environment, they might think differently about how packaged goods brands are promoted to consumers.

That was a key argument emerging from a recent high-level roundtable discussion on how to tackle Asia’s plastic pollution problem, hosted by Eco-Business and green group World Wide Fund for Nature (WWF) in Singapore.

Marketers and packaging designers are the missing voices in the plastic pollution debate—and yet they are responsible for designing and promoting the products that are finding their way into Asia’s waterways and ocean at an alarming rate, noted participants at the closed door event at Novotel Singapore hotel on 12 January. The event was held under the Chatham House Rule.

“If they [marketers and designers] don’t know the [plastic pollution] story, then the consumer is unlikely to get the message either,” commented one non-government organisation (NGO) representative during the discussion, which involved Singapore’s National Environment Agency chief executive Ronnie Tay, Redmart co-founder Vikram Rupani and Elaine Tan, chief executive of WWF Singapore.

As much as marketing and design contribute to the plastic problem by driving consumption and creating non-recyclable waste, there is an opportunity to harness their creative skills to promote plastic recycling as a desirable lifestyle choice, suggested one government delegate from a country with one of the world’s highest recycling rates. 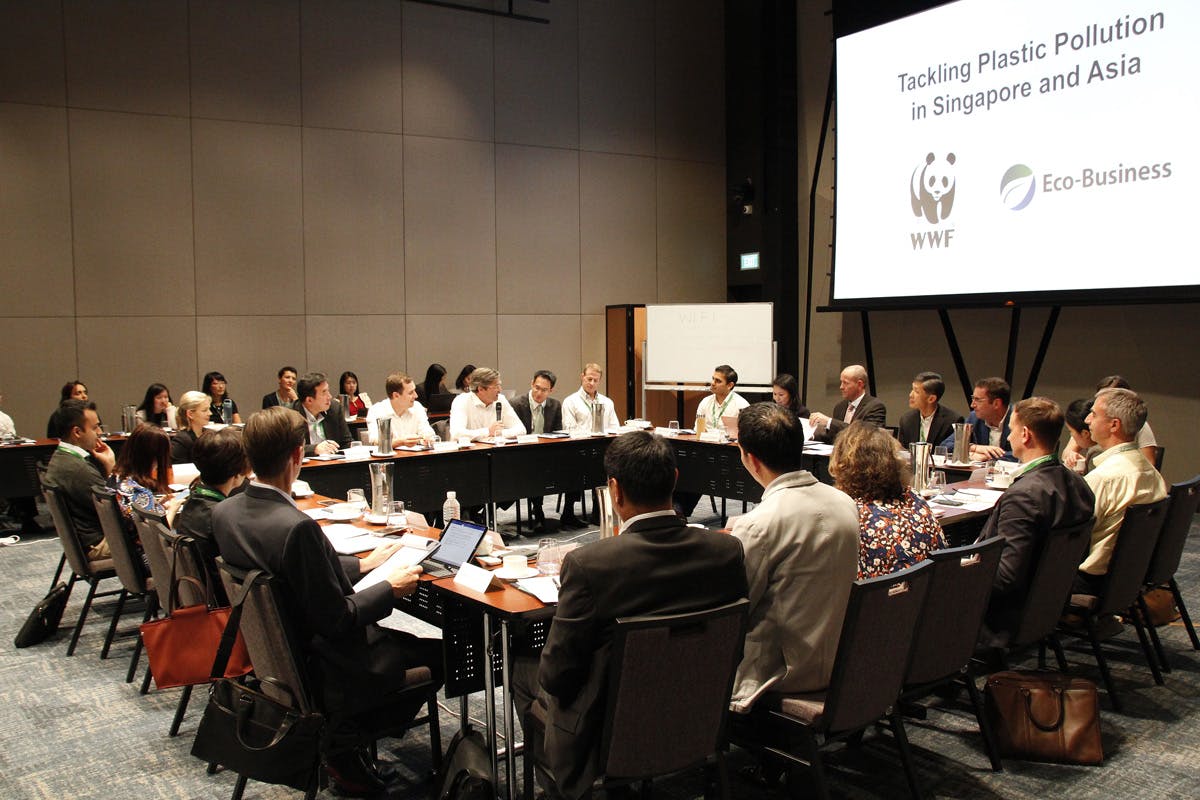 “We need to give waste management a positive spin,” he said. “We need to work with the marketing industry to make the three R’s (reduce, reuse, recycle) a way that people want to live.”

This is a message that businesses need to hear as well as consumers, so that plastic is seen as a resource not as a byproduct. “If it’s called packaging waste then it’s too late, we have already done something wrong,” commented a participant from a large pharmaceutical company.

While the Singapore government does an efficient job of managing waste in the city-state, an NGO representative suggested that this has given citizens an “out of sight, out of mind” attitude to waste—which explains why the city-state’s overall plastic recycling rate is still so low at 7 per cent.

Not only must the value of recycling be better communicated to Asian consumers by companies and governments, but the design industry needs to create packaging that is compatible with recycling machinery to extend the life of plastic products, she added.

The real recycler is not the grinder, shredder, collector or processor—it is the buyer.

Plastic pollution is a problem so big and complex, and with so many different actors involved, it’s easy for responsibility to be passed from one stakeholder to the other, one participant noted.

This makes tackling the plastic problem hard. A hospitality brand executive noted that while his company has reduced its plastic footprint by giving customers the option of glassware instead of plastic bottles to serve water at events, customers continue to demand plastic bottles.

“The business case is really not strong enough to take away plastic bottles—and it’s not about cost,” he said, adding that feasibility studies have shown that his firm would save money if it switched from plastic to glass bottles.

“Customers still really want plastic bottles,” he said, recalling occasions where clients had asked for glass instead of plastic, only to change their minds on the day of the event; feedback showed that some customers did not trust the water served out of glass jugs to be safe to drink.

However, cost was a major hurdle for companies looking to switch from traditional petroleum-based plastic to biodegradable alternatives, said participants.

An executive from a services firm that recently introduced an initiative to curb its plastic footprint pointed out that even if the plastic alternative cost only a single cent more, rolling it out at scale would cost millions of dollars; which is why many firms are reluctant to.

The search for solutions

Given the scale of the problem, solutions do not work unless all stakeholders work in unison, and consumers and businesses play their part by cleaning and separating plastic waste at source, said an NGO representative who described recycling plastic as akin to “reconstituting an omelette.”

A big piece missing from the plastic value chain is demand for recycled material, he suggested.

“The real recycler is not the grinder, shredder, collector or processor—it is the buyer,” he said, adding that more needed to be done to connect plastic recyclers with buyers to create a viable aftermarket in Asia.

Arguably the biggest barrier to addressing Asia’s plastic problem is the fact that the issue is not taught properly in schools, suggested one NGO representative.

“Schools should not just be celebrating big events like Earth Day, but teaching everyday practices like recycling—that is what is lacking in the education system,” she said.

Could Asean provide an answer?

Beyond individual stakeholder groups such as teachers and consumers, a regional approach was needed to confront the plastic problem, suggested delegates.

Five of the world’s top 10 biggest sources of marine plastic pollution are Southeast Asian, so a solution to the problem should come from the Association of Southeast Asian Nations (Asean), a participant from an environmental consultancy suggested.

Asean is being chaired by Singapore this year, so the city-state has the opportunity to push for regional cooperation to fight the plastic problem, which came into focus at the start of the year when China announced a ban on plastic waste imports. Asean countries are taking on much of the waste that China now refuses.

“The Asean way isn’t to leap into binding agreements, but it is high time to think about creating a regional framework for post consumer plastics and also for recycling,” he said.