Briefing from Bonn: 3 reasons why climate talks are stalling

With the first week in the Bonn Climate Change Conference now over, writing the rules for the implementation of the Paris Agreement remains a work in progress. What’s the hold-up?

As the second week of talks at the Bonn Climate Change Conference gets underway, some 200 country delegates remain far from agreeing on a rulebook to implement the Paris Agreement, the historic accord signed in 2015 to reduce remissions and keep the worst effects of climate change at bay.

The rulebook is central to the discussions because it outlines how the targets agreed upon under the Paris Agreement will be achieved. Overall, delegations said that each item in the rulebook needs to be urgently discussed, although they can’t seem to agree on how to pick up the pace.

We can not shrink in fear from the impacts of climate change and the implications of the tremendous effort demanded of us.

The working deadline for the completion of the rulebook is December 2018.

Jens Mattias Clausen, campaigner for Greenpeace Nordic, said 2018 is a crucial year in the planet’s fight against climate change, but without increasing the ambition levels of existing targets and putting in place a robust set of rules on how to achieve them, the world is headed towards a 3 degrees Celsius of global warming. This is far above the 1.5 and 2 degree Celsius goals set out in the Paris Agreement. 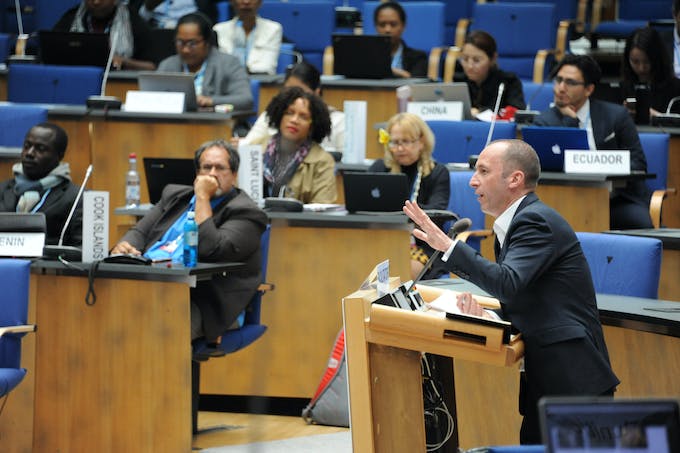 The moderator during the two-day Suva expert dialogue at the Bonn Climage Change Conference, May 2-3, 2018. The dialogue mainly centred on financing for loss and damage.

“The window of opportunity to reverse climate change is swiftly closing,” he said at a press briefing.

Here are some of the other issues that are stalling progress in climate change talks at Bonn.

1. It’s all about the money

Finance has been the stickiest issue, as most developed countries want clarity on exactly how much climate funding they are committing to and how funding levels will be adjusted to support progressive emission reductions every five years in the countries’ Nationally Determined Contributions (NDCs).

Climate funds will be distributed to developing countries—who have historically been the least responsible for climate change but are the most vulnerable to its impacts—for climate mitigation and adaptation once the Paris Agreement begins to be implemented in 2020.

Specifically, Article 9.5 in the Agreement, otherwise known as the predictability clause, calls for developed countries to review and report on their financial commitments to developing countries every two years. Other countries are encouraged to do so on a voluntary basis.

Observers at the talks note, however, that some countries are using this highly contentious clause as a “blocking strategy” to progress global climate action, by saying that it’s hard to put in the figures now when their government financial policies might still change over the course of two to five years.

Eddy Perez, international policy analyst for non-profit Climate Action Network Canada said 9.5 is the crux of the Paris Agreement rulebook. “Finance is an issue of trust. While this has been a controversial issue at these negotiations, it is necessary that all countries engage constructively on this topic,” he said.

2. Not from my own pocket

Last week’s negotiations also saw slow progress on another finance mechanism known as loss and damage, or funding for climate impacts that developing countries can no longer adapt to.

Julie Anne Richards, founder of Climate Damages Tax, said that developing countries need money to protect their people by, for instance, setting in place social safety nets for the most vulnerable.

She cited the case of how Fiji had to mobilise the entire country’s population to rebuild after a tropical cyclone last month. “Everyone has either been displaced, or had to stop school or work to bounce back from cyclone. You cannot just mobilise an entire country and not have the finance to support it,” she said.

Another issue that has been in the negotiations for three years already, but which has been sidelined again this time, is whether or not fossil fuel interests should be allowed a seat at the negotiations table.

Despite the question on whether or not there is a conflict of interest in fossil fuel companies joining the climate talks, the topic was excluded from the text which the UN climate body’s secretariat released last Saturday summarising last week’s discussions.

Issues that are not committed to writing in the UN formal text generally take longer to get an agreement on, experts note.

Finally, the Talanoa Dialogue kicked off on Sunday and will run until Wednesday this week.

Tuesday has been designated the Talanoa Day where business leaders, civil society groups and individuals are invited to share their experiences on climate impacts and their ideas to further reduce emissions. The outcome of the Talanoa Dialogue will fill in the gaps between current NDCs and align it with Paris Agreement goals.

Catherine Abreu, executive director, Climate Action Network Canada, said at a press briefing that now is the time for government, civil society and community representatives alike to unite for transformative change and nothing less.

“We cannot shrink in fear from the impacts of climate change and the implications of the tremendous effort demanded of us,” she said.