Australian recycling company Green Distillation Technologies (GDT) has developed a process which can safely turn end-of-life tyres into commercially valuable oil, steel, and carbon. More recently, the firm has ventured further into developing their products by turning the carbon raw material into hydrogen.

Through their recycling process, “one hundred per cent of the tyre is converted into either oil, carbon, or steel,” said GDT technical director Denis Randall, speaking to Eco-business. “A tiny amount of non-condensable gas is produced, but that goes back to our burner—not into the atmosphere,” he qualified.

GDT was formed in 2009 when Randall began his first experiments in the town of Warren, New South Wales. He was motivated to tackle the global waste tyre problem after living in Indonesia, where the Australian Embassy was just down the road from a foul-smelling garbage tip.

Waste tyres are a mounting environmental problem. An estimated 1.5 billion tyres are discarded globally every year; these tyres, which have been engineered for durability, can take up to 500 years to decompose.

In developed countries such as Australia and the United States, most scrap tyres end up at landfills, or are dumped illegally, choking waterways and posing as a fire hazard. A small portion of these tyres are shredded and recycled to make rubber pavement. Often, waste tyres are shipped overseas, to be disposed of elsewhere.

Exported waste tyres inevitably arrive in developing countries such as India and Malaysia, where the majority are burned as fuel or turned into low-quality oil through a chemical process known as pyrolysis. When tyres are burned or pyrolysed improperly, their incineration releases a noxious mixture of highly toxic gasses, including sulphur oxides, nitrogen oxides, and dioxins.

The way I see it, we aren’t a recycling operation; we manufacture oil, and our raw material just happens to be a waste product. 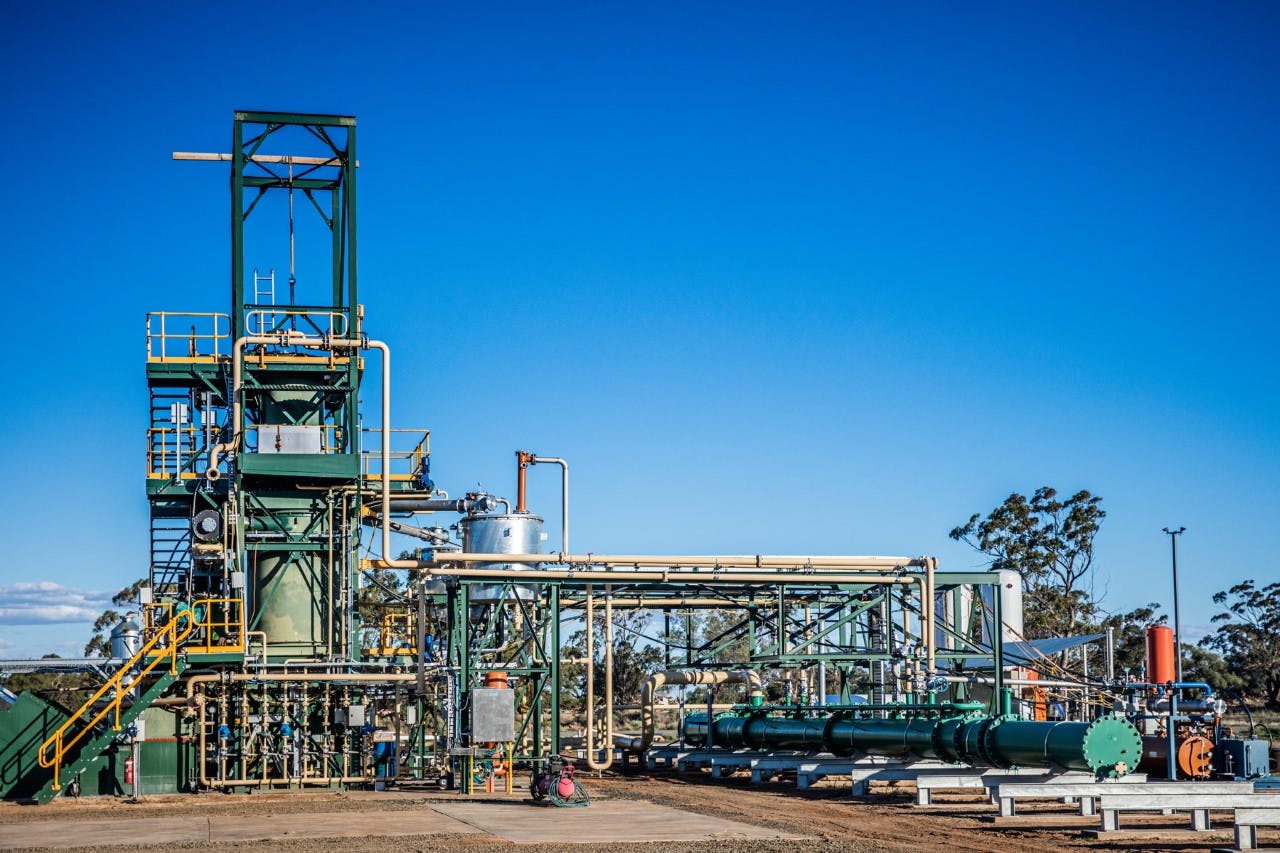 Randall explained that their tyre recycling process was designed to be financially and technically suitable for developing countries. GDT uses a chemical process called destructive distillation to obtain usable products from old tyres.

“There are no emissions from the destructive distillation process—none whatsoever—because it’s completely contained. I’ve also designed the plant to run entirely on waste heat, although now, because we don’t have any waste heat nearby, we use a small amount of the oil we produce as our heat source,” said Randall.

“It’s a very low temperature process,” chief operating officer Trevor Bayley added. “It was designed to be simple and accessible, even in countries without high technology.”

The products of destructive distillation are recovered steel, carbon, and high-quality oil. One study conducted by the Queensland Institute of Technology showed that GDT’s oil, when mixed with diesel, gave a fuel that reduced nitrogen oxide emissions by 30 per cent with no loss in engine performance.

Australia, which currently discards over 25 million used tyres every year, is a major exporter of waste tyres to India and Southeast Asia. Last year, Australia’s environment minister signed off on a timeline which will see the export of waste tyres banned by December 2021.

“The way I see it, we aren’t a recycling operation; we manufacture oil, and our raw material just happens to be a waste product,” Randall remarked. “Rather, I understand it as resource recovery.”

The low cost of the raw material as well as the efficiency of the destructive distillation process has enabled GDT to look into hydrogen development.

“Once you have a carbon source at negative cost… many reduction technologies become commercial, including secondary water gas reactions to produce hydrogen for subsequent use in efficient hydrogen cell electricity production,” said Randall.

The carbon raw material resulting from the destructive distillation process comes in the form of carbon black, a useful, finely powdered carbon. In addition to conversion into hydrogen, carbon black is used for plastics, electrodes, cosmetics, water filtration, toothpaste, and food colouring.

Low costs, processing efficiency—what else is needed for GDT to achieve scale?

“Money,” Bayley said. “As a corporation, we’re in the market for raising funds, to finish our first plant here in Warren, a second plant in Southeast Queensland, and to start the rollout process in the United States.”

Bayley noted that it was difficult to raise money from the government and private sources in Australia for new technologies to move to commercialisation, which he chalked down to a lack of interest.

GDT has further plans to expand into the United Kingdom, South America, and Europe in the future.