Asian wetlands and nature reserves score high on the United Nations’ list of new hotspots that could boost eco-tourism in the region. These locations, however, must meet one qualification: they should be key ‘stop-over destinations’ or flyways of migratory birds.

The UN World Tourism Organisation (UNWTO) announced early this month their latest programme called ‘Destination Flyways’, of which four out of eight locations worldwide are in Asia. These locations include the Seocheon Tidal Flat and Geum River in South Korea, Chongming Dongtan Nature Reserve in China, Chilika Lake in India and Korgalzhn State Nature Reserve in Kazakhstan.

‘Destination Flyways’ is the theme of this year’s World Migratory Bird Day, which was held on Saturday and Sunday. The event is celebrated on the second weekend of May every year. It highlighted the importance of protecting migratory birds and their natural habitats and how tourism can play a huge role in this cause.

UNWTO secretary-general Taleb Rifai explained that the Flyways project is an ideal example of how tourism and biodiversity can benefit from each other. “Tourism has a major responsibility in advancing biodiversity protection. Every year, millions of tourists are wonder-struck by the world’s wild flora and fauna while travelling. Without such enriching experiences, tourism could not be the vehicle for sustainable growth, job creation and poverty alleviation that it is today,” Rifai said. 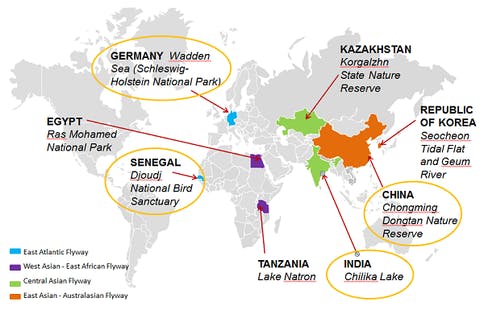 Eight key migratory flyways chosen by the UNWTO that will be developed as part of an eco-tourism initiative. Infographic: UNWTO

The eco-tourism plan seeks to provide a framework for the sustainable eco-tourism management of these migratory bird landing sites, the UNWTO said. If the project succeeds, several benefits will be attained, such as wildlife protection and conservaton, livelihood for local communities, and a truly nature retreat for tourists, they added.

Tourism has a major responsibility in advancing biodiversity protection. Every year, millions of tourists are wonder-struck by the world’s wild flora and fauna while travelling. Without such enriching experiences, tourism could not be the vehicle for sustainable growth, job creation and poverty alleviation that it is today

Currently, there are over one billion tourists traveling the world every year and as a result, the travel sector earns a global annual income of US$1.4 trillion, the UNWTO noted.

The industry has a huge potential to support the plight of millions of migratory birds by channelling these revenues into conservation and community development, the organisation stressed.

This initiative will also enhance the tourism industry’s role in sustainability - allowing sustainable tourism to become a viable economic alternative and thus, propagating the value of ecosystem services, it added.

Bradnee Chambers, executive secretary of the Convention on the Conservation of Migratory Species of Wild Animals (CMS), a treaty administered by the United Nations Environment Programme (UNEP) to co-organise the annual World Migratory Bird Day, noted that bird-watching in itself is a multi-billion dollar industry, providing employment and income for surrounding communities.

In the United States alone, bird-watching has contributed about US$36 billion to the economy in 2009, while the entire wildlife-watching industry generated about US$54.9 billion in 2011.

“Many people want to experience nature when they travel and there are millions of people around the world who are particularly interested in observing birds in their natural surroundings,” noted Chambers.

In Asia, birding tours have flourished in recent years, although the business remains a less popular holiday activity, excluded from the list of mainstream sightseeing activities in the region.

‘Destination Flyways’ could change this, as the programme is expected to progress to its main phase by the middle of this year and will be fully implemented by next year. The tourism organisation is currently collecting data for each site and mapping the ways on how the project will proceed with local partners, it said in its website.

The other four destinations included in the initiative are Germany’s Schleswig-Holstein National Park, Egypt’s Ras Mohamed National Park, Senegal’s Djoudj National Bird Sanctuary and Tanzania’s Lake Natron. All of these natural parks are located along the routes of the migratory birds.