Global banks continue to pump billions into the fossil fuel sector, despite making commitments to the Paris Agreement on climate change. Asian banks are the biggest financiers, supporting some of the most environmentally destructive firms, a report has found.

Contrary to their vocal support of the Paris Agreement on climate change, leading global banks continue to lend billions of dollars to the fossil fuel sector, financing some of the world’s most environmentally destructive practices.

The biggest offenders are Asian banks, which have contributed over US$95 billion since 2014, according to the 8th annual Fossil Fuel Finance Report Card.

The 2015 Paris Accord is a plan to limit the global temperature increase to two degrees Celsius above pre-industrial levels. But banks are still investing billions of dollars into the direct and indirect financing of fossil fuels – helping some of the world’s largest contributors to carbon emissions expand their operations.

While select banks are taking measures to curb their environmental impact, and a large number made a Paris pledge to quit coal, it’s mostly business as usual for banks in Asia.

Asian banks appear to be unaware of the many financing opportunities and “the massive risks associated with fossil fuels,” commented Jessica Robinson, managing director of sustainable investment platform Moxie Future, and former Head of Asia for the United Nations’ Principles for Responsible Investment.

No one, including governments, appears to care and citizens aren’t protesting.

The extraction, processing and burning of these fuels significantly contributes to habitat destruction and global warming, and investing in the infrastructure behind the industry advances its environmental and social impact.

The report by the Rainforest Action Network (RAN), BankTrack, Sierra Club, and Oil Change International rated 37 of the world’s largest banks by their policies and practices related to financing fossil fuels.

2016 saw US$87 billion dollars funnelled into extreme fossil fuels – a 22 per cent decrease from 2015, when banks invested US$111 billion, according to the report.

Some banks have started to take steps to reduce their environmental impact but the report has also seen an increase in the financing of coal power since 2014.

And with a global investment of more than US$290 billion over the last three years going into fossil fuels, the report urges banks to improve their policies – quickly.

Oil Change International found that the existing fossil fuel reserves are enough to push the world over the 1.5 degree Celsius global warming limit set by the Paris Agreement. To achieve this goal, banks must ultimately halt their support of fossil fuels entirely, and divest to renewable energy sectors, states the report.

Banks need to implement policies that will hold them accountable for their fossil fuel investments, and to curb their financing of these investments, stated the report. This is particularly important in the wake of United States president Donald Trump’s withdrawal from the Paris Agreement; banks need to step up, the report urged. 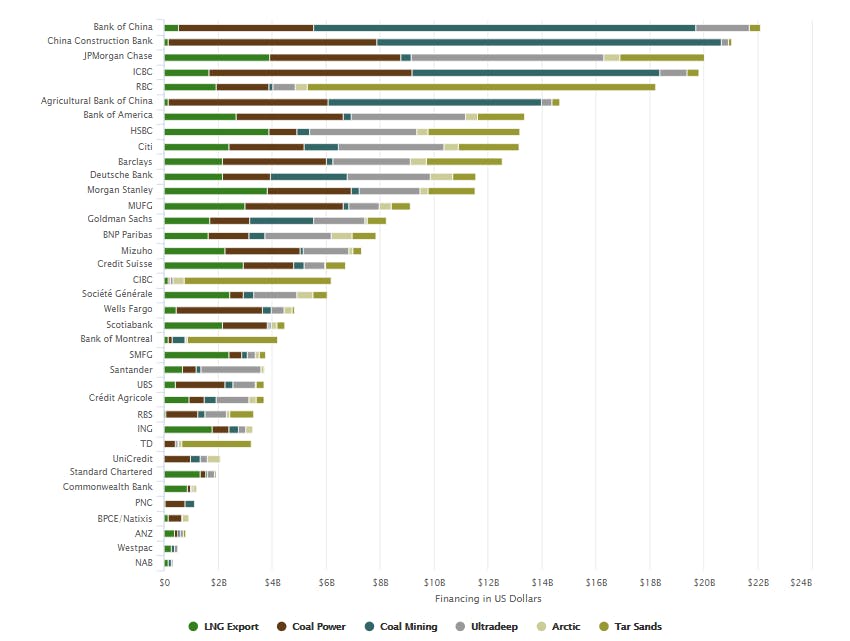 In the report that graded banks A to F in terms of their support for fossil fuels, Western countries scored a D- or a C rating in some categories but none managed to score above a B grade.

But Asia fared much worse, with banks from Japan and China receiving straight Fs for their policies in all extreme fossil fuel sectors.

Bank of China and China Construction Bank are the top funders, contributing more than US$40 billion to extreme fossil fuels since 2014, particularly funding coal mining and coal power.

We need greater transparency over who is lending to what, and a more accurate and complete picture of the financing of Asia’s fossil fuel industry.

Despite China’s efforts to uphold the Paris Climate Agreement “there is still a disconnect between policy and political commitments and the actions of China’s banking sector,” Robinson told Eco-Business.

Other South East Asian banks such as United Overseas Bank (UOB) and DBS, not mentioned in RAN’s report, also continue to invest in fossil fuels, particularly the oil and gas sector and their transportation.

Asian banks continue to be the worst offenders as they experience less external pressure than their Western peers. “No one, including governments, appears to care and citizens aren’t protesting,” Assaad Razzouk, CEO of Sindicatum, told Eco-Business.

In order to ensure banks make a change, regulators, citizens, NGOs and shareholders have to pressure them, added Razzouk. And banks should adopt the Task Force on Climate-Related Financial Disclosures’ (TCFD) Final Recommendations Report, which helps organisations and investors to assess climate-related risks and opportunities.

“We need greater transparency over who is lending to what, and a more accurate and complete picture of the financing of Asia’s fossil fuel industry,” commented Robinson.