The outspoken chief sustainability officer has led the controversial paper firm through the most tumultuous period in its history. She has been replaced by the HR director of APP's sister company.

Aida Greenbury, one of the most high-profile figures in the forestry industry, is leaving controversial paper giant Asia Pulp and Paper (APP) after 13 years with the company.

The charismatic executive, who has been chief sustainability officer since 2004, has been overseeing APP’s adoption of sustainable forestry practices after many years of battling activist groups over the company’s checkered environmental and human rights record.

Greenbury, an Indonesian who has spent her entire career in the forestry sector, has led APP’s sustainability efforts through the most tumultous period in the company’s 45-year history.

While she has been the key player behind major sustainability achievements including a commitment to stop clearing rainforests to make way for plantations, she also presided over APP’s involvement in the Southeast Asian haze crisis in 2015, when the company was heavily implicated in the worst forest fires ever to hit the region.

A vocal proponent of sustainable forestry practices in social media and a regular figure at high-level industry events, Greenbury has been faced with ongoing challenges to the credibility of APP’s sustainability claims, most recently the construction of one of the world’s largest paper and pulp mills in South Sumatra, that has alarmed environmentalists.

News of Greenbury’s departure emerged when she announced it on Twitter on Thursday. 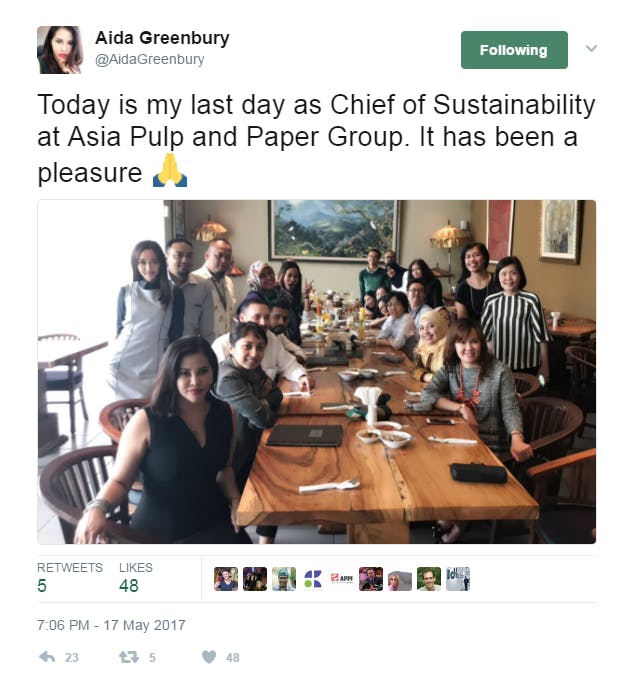 She has been replaced by Elim Sritaba, director of human resources for APP’s sister company Sinarmas Forestry. Sritaba takes on the role of director of sustainability for APP.

While Greenbury is leaving the company, she will retain ties with the firm as technical sustainability consultant. 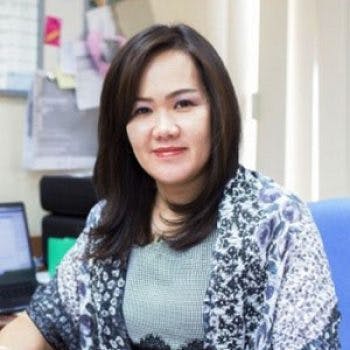 In a short statement, APP told Eco-Business that the staff changes were “necessary to strengthen APP’s long term commitments to sustainability and established programmes to elevate our environmental scorecard, biodiversity conservation efforts and protection of community rights in a collaborative and harmonious manner with all stakeholders.”

The company said that Sritaba had been an “active contributor and leader in APP’s sustainability journey,” and had been a driving force behind the implementation of the company’s Forest Conservation Policy introduced in 2013.

Worldwide Fund for Nature, a keen observer and consistent critic of APP, commented that Greenbury’s departure raised questions about the company’s commitments to change.

Greenbury “has been a voice for conservation both within APP and within corporate and regulatory Indonesia in general for many years,” Aditya Bayunanda, forest commodity leader, WWF Indonesia, told Eco-Business.

“This leadership change lends more questions to ongoing concerns from civil society about APP’s conservation commitments, including issues like wood supplies to its new Oki mill, or even its support of the Indonesian president’s peat conservation and restoration legislation.”

“APP’s ability to take concrete actions on such issues in the near future will be a closely-watched indication of the company’s willingness to meet its conservation commitments,” he said.