Asean banks need to raise the bar in sustainable finance

Southeast Asia’s banks have only just started to think about their impact on society and the environment. A new report urges regulators to introduce firmer sustainable finance regulations for banks, or risk their countries’ defaulting on climate pledges.

Southeast Asia’s private sector has made some progress in recognising the impact that companies have on the environment and society in recent years, but one important industry remains well off the pace—banking.

This is the key finding of a new report by World Wide Fund for Nature (WWF) and the National University of Singapore, titled Sustainable Banking in ASEAN: Addressing ASEAN’s FLAWS. Released on 3 October, the report said that while Asean’s banks have taken some steps to clean up their own operations, the penny hasn’t dropped that these powerful institutions also shoulder responsibility for who they lend money to.

Banks in Asean—or the Association of Southeast Asian nations—continue to fund planned coal-fired power stations in Vietnam and Indonesia. Burning fossil fuels will undermine these countries’ ability to meet their commitments to the Paris Agreement on climate change, and this is especially troubling because global warming is expected to affect Southeast Asia more adversely than almost anywhere on Earth.

Of the 34 banks in the study—which analysed the public data on the leading banks in Indonesia, Thailand, Malaysia, Vietnam, the Philippines and Singapore—13 consider environmental, social and governance (ESG) risks to apply only to their own businesses.

As such, these banks see corporate governance and sustainability reporting as merely an exercise in good housekeeping rather than responsible lending, which has a far greater impact on people and the planet.

The majority of the banks in the study (21 of the 34) recognise that the businesses they lend money to might harm the environment and society, but none of them disclose how they manage sustainability risks at the portfolio level.

An even greater number (26) talk about sustainability in their corporate vision statements, and yet only 12 declare that climate change is a risk for society and business, the study found.

The speed at which Asean banks are integrating ESG risks into their lending practices has been slowed by a hotchpotch of sustainable finance regulations and guidelines that neither impose penalties or offer incentives to drive uptake, the study noted.

The results of WWF’s report differ markedly from the findings of a study on ESG regulations and guidelines the green group ran in 2005, when Singapore lagged in a regional comparison with Malaysia and Indonesia.

This year’s report, which uses a different methodology, finds Singapore—which is home to the region’s largest banks, DBS, OCBC and UOB—out in front. Vietnamese banks have the most work to do. 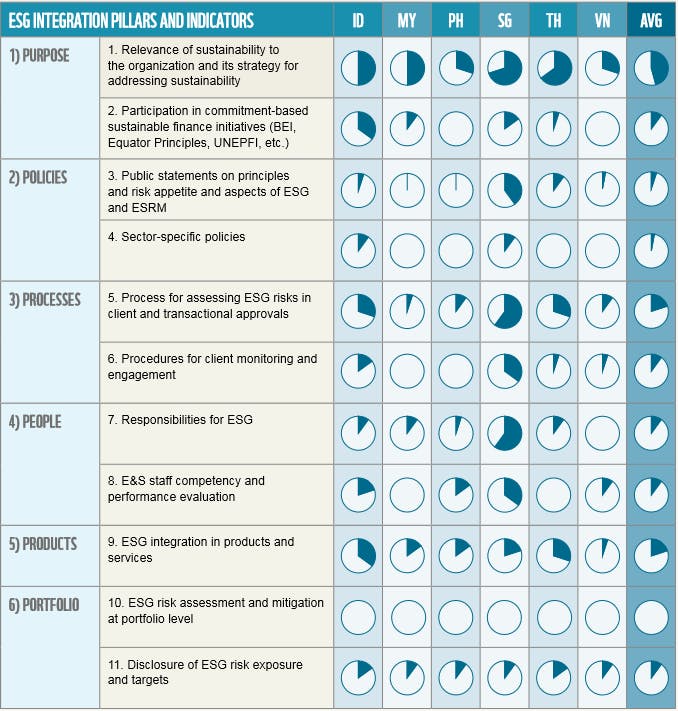 Singapore banks are much better in two key areas of ESG integration - people and process. Its banks have more staff who are responsible for ESG, and who are assessed on their abilities in the field. Banks in the city-state also have the strongest processes in place for assessing ESG risks in client and transaction approvals.

As for corporate governance, Singapore banks also have the edge in disclosure and transparency and auditing on ESG risks. 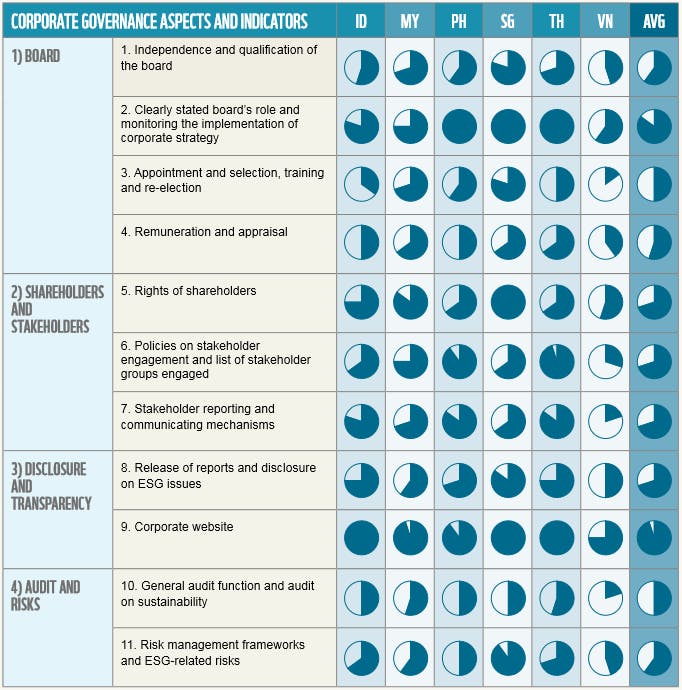 On an individual country basis, the biggest banks tend to have the strongest approach to sustainability, the report found.

The bank with the best ESG record in Singapore was DBS, Southeast Asia’s largest bank by assets. It is the only bank of the three to declare an intention to support the United Nations Sustainable Development Goals, and to have sector-specific policies for ESG risk.

In Indonesia, Bank Rakrat Indonesia (BRI), the country’s second largest bank by assets, came out on top. BRI scored well for championing sustainability in its corporate vision, and following through with evaluating the ESG knowhow of its staff.

Maybank led the report in Malaysia. The country’s largest bank, it performed particulary well for auditing sustainability measures and was the only Malaysian bank to disclose that it has engaged with regulators on environmental and social issues in lending practices.

Bank for Investment and Development of Vietnam (BIDV) has a clear lead in Vietnam. It’s the only bank to declare its commitment to avoid financing projects that have a negative environmental impact, and the only player to disclose any information on the integration of environmental and social principles into its financial products.

Jeanne Stampe, WWF’s head of Asia finance and commodities, commented that while Singapore banks are in the lead, this is based on the information they disclose. “Some banks maybe doing but not saying,” she said.

Unless urgent action is taken by the banks over the next 12 months, Asean could be facing a looming environmental and social crisis that could harm the region’s economic growth, WWF warned.

“There remain four years from now to stay below a 1.5 degree temperature rise as adopted in the Paris Agreement. Banks must therefore act now and develop robust sustainable banking practices within the next 12 months,” Stampe noted.

WWF’s study comes less than one month after a coalition of institutional investors managing more than $1 trillion in assets demanded that 60 of the world’s biggest banks, including JPMorgan Chase, Morgan Stanley, HSBC and Deutsche Bank, take action to slow climate change. This was a move prompted by the devastation wrought by Hurricane Irma.

“Global investors are starting to clean up their portfolios, and they will eventually ask the same of Asean banks,” Stampe told Eco-Business. “The ability of Asean banks to tap into global capital markets is at stake. Asean needs its banks to grow, and it has to be able to attract international capital to do so.”