As the haze worsens and the Indonesian officials crack down on errant land owners, Asia Pulp and Paper has responded to reports that claims APP has the most fire alerts on its concessions.

As the haze crisis in Southeast Asia worsened this week, Indonesian paper giant Asia Pulp and Paper (APP) clarified reports that claimed most of the fires on pulpwood concessions are on APP suppliers’ lands, saying that the reports give a “misleading impression of the reality on the ground”.

On Sunday, Singapore newspaper The Straits Times citing data from the World Resources Institute (WRI)’s Global Forest Watch (GFW) Fires online platform, said that more than 400 forest fires had been spotted on pulpwood concessions in Sumatra between September 5 and 12, and that “a majority of the companies are listed as suppliers to Singapore-based Asia Pulp & Paper”.

In the past week, the fires burning in Indonesian forests sent Singapore’s 3-hour Pollutant Standards Index, a measure of air quality, into the ‘Very Unhealthy’ range (200 to 300). The air pollution also led to school closures and flight disruptions in Malaysia. In Indonesia, a few children died of respiratory failure due to the haze, and Riau province has declared a state of emergency.

Aida Greenbury, APP’s managing director for sustainability, told Eco-Business that it was “important to note that the existence of a fire in a concession area does not imply that the company had any involvement in its setting.

A majority of all fires are actually burning outside of company concession areas, she said.

GFW Fires data showed that 54 per cent of all fires in the same week began outside concessions, while pulpwood plantations accounted for 41 per cent of blazes. Palm oil and logging concessions made up the remainder. 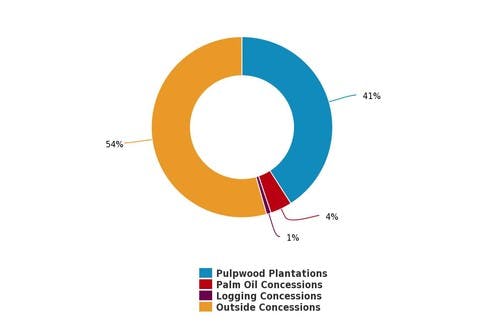 Andika Putraditama, outreach officer, WRI, said that the data from GFW Fires, gained from remote sensing snapshots, plantation land cover and company concessions was “limited”, and based on this, “we cannot determine who is causing the fires”.

WRI is currently tracing how the alerts changed over time to try and determine where and when the fires originated, he added.

Illegal logging and land clearing using fire by individuals outside the concessions could be responsible, said Greenbury, adding that these fires could then have spread into company-owned land.

She shared that “our firefighting teams are currently working around the clock” to put out the fires on its concessions.

The Indonesian military has also since been activated, with thousands of troops helping to fight fires on the ground.

The Indonesian government, too, has started investigating the culprits. On Thursday, the Jakarta Globe reported that 72 individuals were named as suspects for illegally burning forests in Kalimantan and Sumatra provinces, and that a total of 48 cases of arson had been recorded. Of these, 16 have been fully investigated and handed over to prosecutors.

The Straits Times then reported that 10 plantation companies were also under investigation by the Indonesian government. If found guilty of intentionally starting fires these companies could lose their license, face heavy fines, and even jail time for senior management.

On Tuesday, Indonesia’s environment and forestry minister Siti Nurbaya Bakar told reporters that a further four firms linked to illegal fires have been identified. She did not name the companies, which operate in Riau and South Sumatra, but said that their licenses will be suspended this week.

In a phone call with Singapore’s environment minister Vivian Balakrishnan a day earlier, Bakar had agreed to share the names of these companies once they have been confirmed with on-the-ground checks. 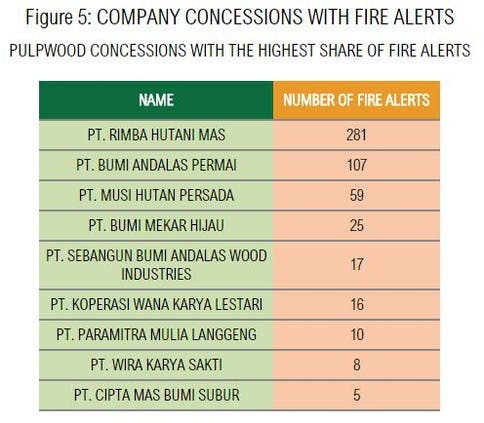 Pulpwood companies with the most fire alerts on Sumatra Island between September 5 to 12. Five of these nine firms are APP suppliers. Image: Global Forest Watch fires

Putraditama told Eco-Business that to effectively deal with forest fires - regardless of where they originate - firms must invest in the necessary human resources and equipment to manage forest and land fires. This is also a government regulation, he added.

APP, which has banned the practice of land burning by suppliers since 1996, employs a fire prevention strategy that includes fire suppression helicopters, satellite monitoring, surveillance drones, and a fire response team made up of 2,900 trained fire fighters, said Greenbury.

The company, which in August also announced a plan to retire and re-hydrate 7,000 hectares of plantations located on peatland, has also trained an additional 2,600 people across 220 villages near its concessions on fire management.

These efforts are usually enough to keep fires in check, and large companies like APP often lend their resources to help national park management put out fires, said Putraditama.

“But with the scale of fires we are seeing now, I doubt even their capacity can handle it,” he added. This year’s haze season has been particularly bad in part due to El Nino, a climate phenomenon which brings prolonged hot and dry weather to affected areas. This acts as a fuel for the fire, he explained.

Greenbury added that another missing element in effective fire prevention is the lack of clarity for a land use plan. There is currently no map which provides an authoritative overview of company concessions.

The Indonesian government is working on a One Map initiative which will make this information available, but the project is expected to take another two to three years to complete.

“APP supports the One Map initiative, and is one of the few companies that have made public all of its supplier’s maps,” she noted. “It is important that this transparency is also adopted by other players in the landscape”.