The controversial paper giant has hired a former Singapore army general turned banker as sustainability chief. Bernard Tan, who has led Singapore bank DBS's Indonesian operations since 2009, joins as the annual haze season is due to hit.

Tan joins the firm from ST Engineering, where he ran the Singapore tech firm’s marketing operation. He was previously with Singapore-headquartered banking group DBS, whose Indonesian operations he ran from 2009.

In addition to his responsibilities as managing director of sustainability and corporate affairs, Tan takes on the role of Singapore country president for APP’s parent company, Sinar Mas, and will be based at the company’s headquarters in Pasir Panjang.

Tan’s career history includes a stint as Singapore Armed Forces’ intelligence chief, and before that a brigadier general. He joined DBS, which is part owned by government investment firm Temasek, in 2008.

The Singaporean, who has no previous experience in sustainability, comes in soon after the departure of long-time sustainability chief Aida Greenbury.

Greenbury, who has spent all of her career in the forestry sector, abruptly left the company in May. The uncompromising Indonesian had led APP’s sustainability efforts for 13 years, a career highlighted by a pledge in 2013 for the company to stop cutting down natural forests to feed its pulp and paper mills.

Many of Greenbury’s sustainability duties has been taken on by Elim Sritaba, who was recently named APP’s director of sustainability - and will report to Tan. Sritaba moved across from APP’s sister company Sinarmas Forestry, where she ran human resources.

Greenbury’s departure came some months after the arrival of Singaporean Lu Ching Lau as head of corporate affairs, who came in to run a unit that was previously under Greenbury’s purview.

Tan’s arrival comes just as Randy Salim, APP’s head of international communications, moves on. Salim, a former TV presenter and World Bank communications executive, was with the company for just over a year and a half.

Scrutiny of APP has centred around the construction of a massive new pulp mill in South Sumatra, a US$2.6 billion facility with a capacity to produce up to 2.5 million tonnes of pulp a year, though this figure was recently reported to be significantly higher.

Environmentalists are adamant that OKI mill does not have enough planation fiber to feed itself, which will mean more deforestation, and more of the peatland fires and land disputes that put Indonesia’s agroforestry sector on the global environmental heatmap for a few months every year. 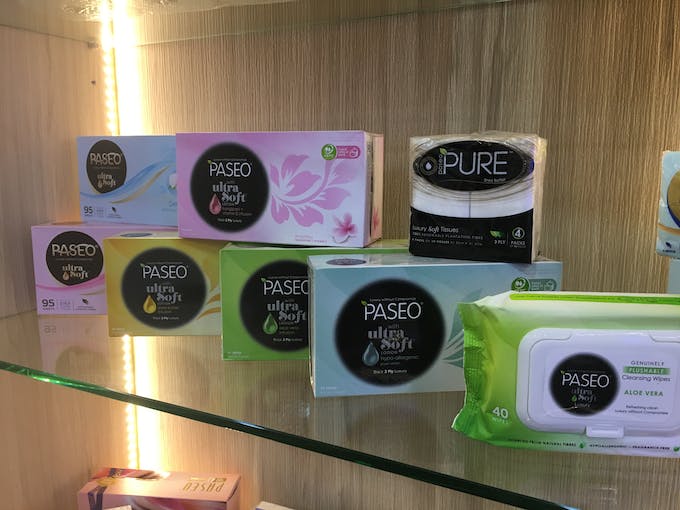 APP products on display at the company’s headquarters in Singapore

Tan will have to see APP through the imminent hot and dry haze season, an annual affair that causes vast areas across Southeast Asia to be blanketed in smoke from burning Indonesian peatlands. Many of these fires are started deliberately to clear land to make way for pulp and paper and palm oil plantations.

APP was heavily implicated in the haze season of 2015, which prompted companies including Singapore’s biggest supermarket chain, NTUC Fairprice, to remove all APP products from its shelves. This ban that has remained in place ever since, costing APP millions in lost revenue in the city-state.

We want people to trust that our products come from an organisation that is not just socially responsible, but also willing to be transparent in our communications and leadership.

The haze also prompted Singapore’s banking industry body, Association of Banks in Singapore (ABS), which represents foreign banks as well as the three largest local banks - including DBS - to review their lending and investment policies, as many have financed haze-linked companies.

Among Tan’s first duties will be to report how APP has prepared for the haze season in a media briefing in Singapore on Wednesday. The company has introduced a new fire audit team to monitor how well prepared APP, and its suppliers, are to fight the haze.

APP claims to have spent more than US$80 million on efforts to suppress fire since 2015, the year that around one third of the forest fires that choked Singapore and its neighbours burned on the company’s concessions.

This investment includes training and equipping 2,700 firefighters, and on technology to monitor and fight fires on peatland, the carbon-rich soil that must first be drained to grow crops, and on which 70 per cent of APP’s plantations are grown.

Tan said in a statement from the company about his appointment: “Despite firm ‘no burn’ policies and government regulations in place, the haze has proven to be a complex issue. At the same time, hotter, drier El Nino conditions are expected to become more common, raising the risk of haze.”

APP, he said, “has made serious and significant advances made over the past few years in terms of addressing the problem of haze. Having seen the efforts, and the effects, of our programmes on the ground, there is reason to be cautiously optimistic about the haze this year.”

Linda Wijaya, APP Group’s managing director, added that the company was transforming into one that “has sustainable practices embedded at the core.”

She commented: “We want people to trust that our products come from an organisation that is not just socially responsible, but also willing to be transparent in our communications and leadership. I believe this is the right thing to do. Bernard is a strong and effective leader, and his reputation for bringing change and good corporate governance makes him well suited to take our business forward.”