Animals on the brink: why extinctions matter

The loss of a single species from an ecosystem is like an airplane losing a rivet. What can be done to prevent animals going the way of the Dodo?

It is hard to put a number on how many species are being lost. New species are being discovered faster than they can be recorded, classified and named. But scientists can say with some certainty that the rate of species loss is accelerating as the climate crisis intensifies, natural habitats disappear, and the trade in animals and their parts ravages the natural world. The World Wide Fund for Nature (WWF) estimates that over the last two generations, the animal kingdom has shrunk by about a half, and between 10,000 and 100,000 species are going the way of the Dodo every year.

Nowhere are species as imperiled as they are in Asia, a region where economic development is applying exponential pressure on natural systems. “If we continue operating with the current economic model, up to 42 per cent of all species in Asia-Pacific could be lost by the end of this century,” predicts Akanksha Khatri, head of nature and biodiversity for the World Economic Forum. Species extinction should not only worry animal lovers. Almost two-thirds (63 per cent) of the region’s economy, particularly sectors such as agriculture, depends on nature to thrive, according to WEF’s New Nature Economy Report.

Advances in science are also curtailed by extinctions. About a half of all prescription drugs are based on a molecule that occurs naturally in a plant, while 70 per cent of cancer drugs are natural or synthetic products inspired by nature. As tropical forests face threats from felling and wildfires, pharmaceuticals companies are losing a large repository of undiscovered genetic material that could lead to the next medical breakthrough. According to some estimates, one potential major drug is being lost every two years.

“If species are lost, all of their genetic knowledge goes with them,” says Khatri. She points to the example of Byetta, a new wave of drugs designed to lower blood glucose in patients with type 2 diabetes. Its key ingredient, exendin-4, is found in the saliva of the Gila monster, a large lizard species native to south-western United States and north-western Mexico. “The loss of species yet to be studied can carry with it the loss of unmeasured potential for further discovery,” she says.

Losing individual species is like “losing rivets from an airplane,” and can have a knock-on effects on other species, and undermine the resilience of entire ecosystems, says Neil Cox, manager of Biodiversity Assessment Unit, a partnership between Conservation International and International Union for Conservation of Nature (IUCN), which assesses the conservation status of species. He refers to the case of the Harlequin toad, which was believed to have gone extinct until its recent rediscovery in the forests of Ecuador. The decline in Harlequin toads led to a drop in the snakes that predated on them, and rivers became clogged with the toads’ favourite food, algae.

A big issue with extinctions is how to spend money to prevent them. An 2020 paper found that without conservation programmes, bird and mammal exinction rates between 1993 and 2020 would have about 3-4 times higher. While it may seem like a better idea to focus conservation efforts on keystone species like elephants, sharks or tigers, which have a visibly large impact on their ecosystems, it makes no sense to let any species go extinct, because there is still so much to be discovered about their value, says Cox.

Of the estimated 8.7 million or so plant and animal species in the world, only 142,500 have had their conservation status evaluated. More than 40,000 are considered threatened, and the list of species added to IUCN’s Red List, which documents the risk status of animal, fungus and plant species, is always growing, says Cox, adding that many extinctions occur without our knowledge.

Extinction is also something of a grey area. A species is considered extinct when there is no reasonable doubt that the last individual has died, which is typically 50 years after the last recorded sighting. A species can be technically extinct if there are no more reproductive pairs, or when the population has fallen to one or two individuals of the same sex, explains Anuj Jain, coordinator of the Asia preventing species extinctions and Illegal bird trade programme at conservation group BirdLife International.

But conservationists are careful to point out that declaring a species extinct is not a precise science. When populations reach very low levels it becomes hard to predict extinction precisely – random events can knock out the remaining numbers very rapidly, or some individuals may persist in small pockets where particular threats are less intense, says Stu Butchart, BirdLife’s chief scientist. “Detecting the loss of the final individuals is very challenging in most circumstances, so we are often not sure until several years or more later,” he says.

Conservationists prefer to describe species close to extinction as those with a high chance of being lost within the next three to five years, as species can be hard to find and, like the silver-backed chevrotain, a rabbit-sized deer in southern Vietnam, and the New Guinea singing dog, rediscovered after classified as extinct. This World Wildlife Day, Eco-Business highlights six species that are in serious danger of being consigned to history — unless more is done to save them. 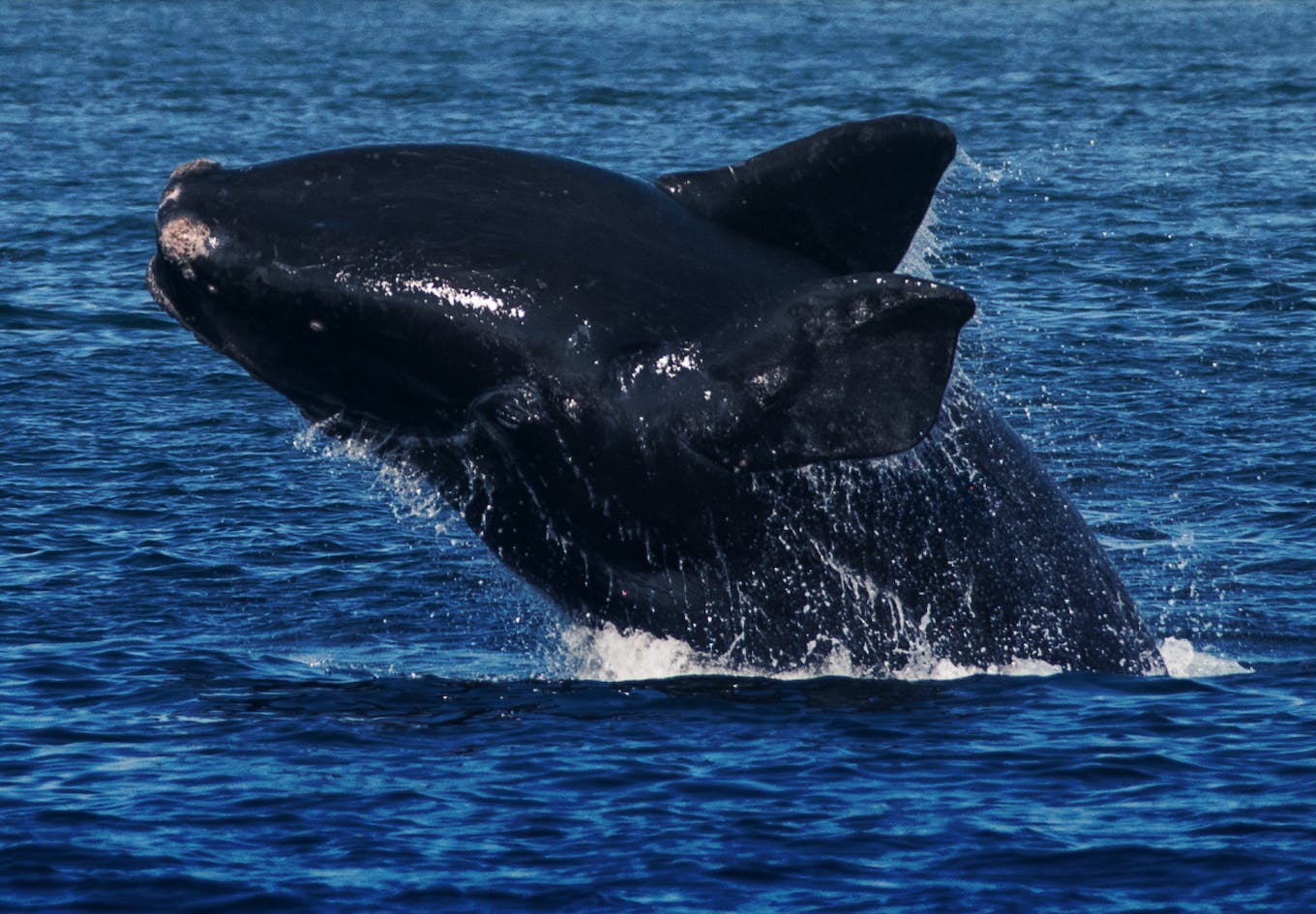 Right whales were so-named because they are the “right” whales to hunt, as they are found near shore, swim slowly and tend to float when dead. Hunting them was banned in 1935, but the species is critically endangered. Thirty-four Right whales have been killed since 2017 — 10 per cent of their entire population. The main threats are collisions with commercial vessels, discarded fishing lines strewn across migration routes and feeding areas, and seismic airgun blasting to search for oil and gas. Around 330 individuals are believed to remain, including about 80 breeding females. Washington-based non-profit Oceana is campaigning to reduce threats to North Atlantic right whales, calling on the US and Canadian governments to introduce speed restrictions in areas where the whales are expected or present, and reducing the amount of vertical lines used in fisheries. 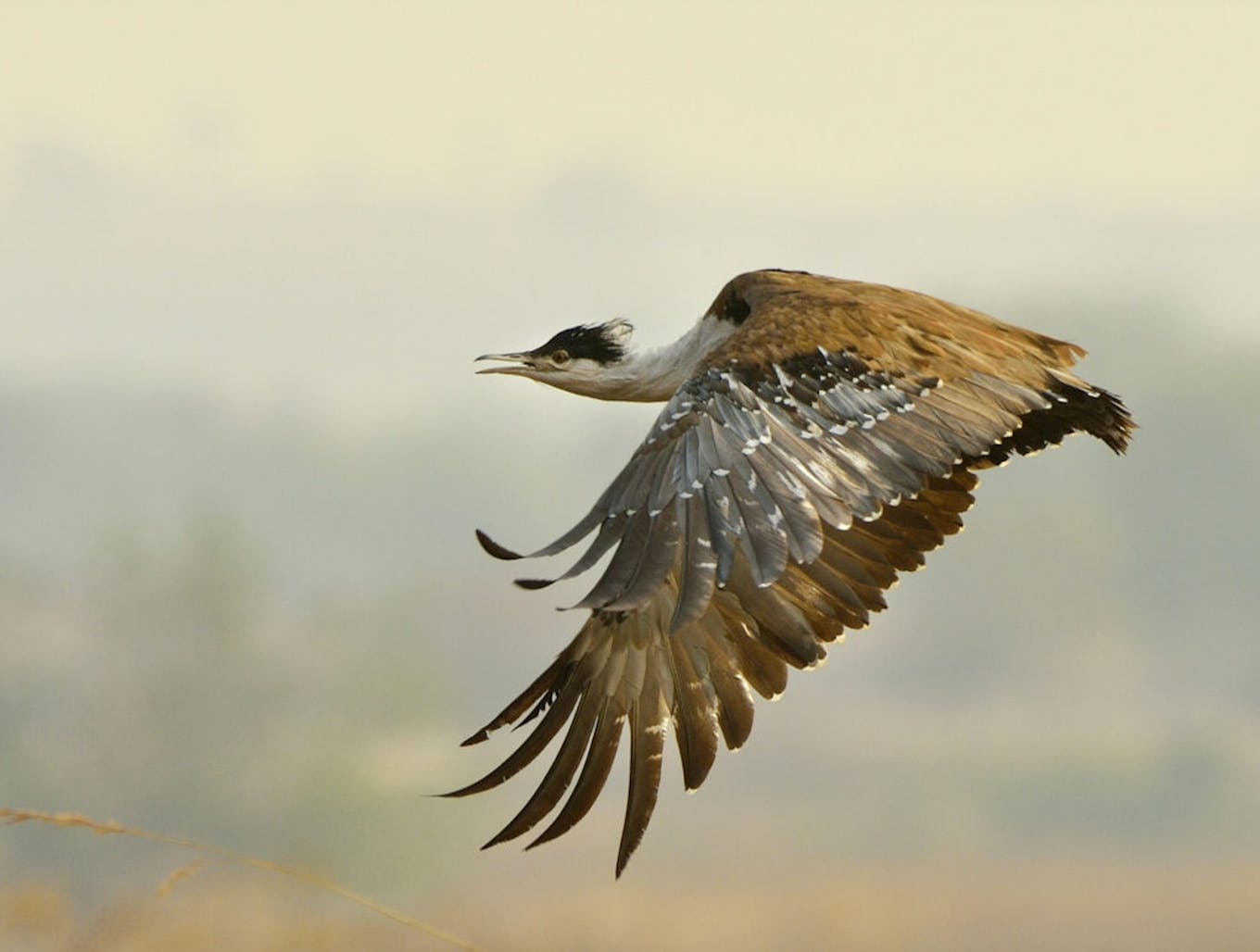 The Great Indian Bustard is a victim of the proliferation of renewable energy in western India. Image: Arun SK/Mongabay

The Great India Bustard is found in the west Indian subcontinent, where it lives in dry grasslands and scrublands. Its habitat has been its downfall. While forests are highly prized for their carbon value, grasslands are regarded as wastelands, and have been used by the energy-hungry state of Rajastan as sites for wind and solar farms. “We are not against solar and wind, but it’s being put in the wrong places,” says Anuj Jain of BirdLife International. Around 150 Great Indian Bustards remain, the population dwindling by three-quarters over the past three decades. They are dying at the rate of 15 per cent a year due to collisions with high voltage power lines.

Efforts to save the heavy bodied, ostrich-like bird include a project to involve the local community in conservation. Local farmers and herders living in villages surrounding the Desert National Park, the main home stretch of the bustards, have been trained as nature guides by the forest department, earning them additional income and giving them an incentive to protect the birds and their habitat. 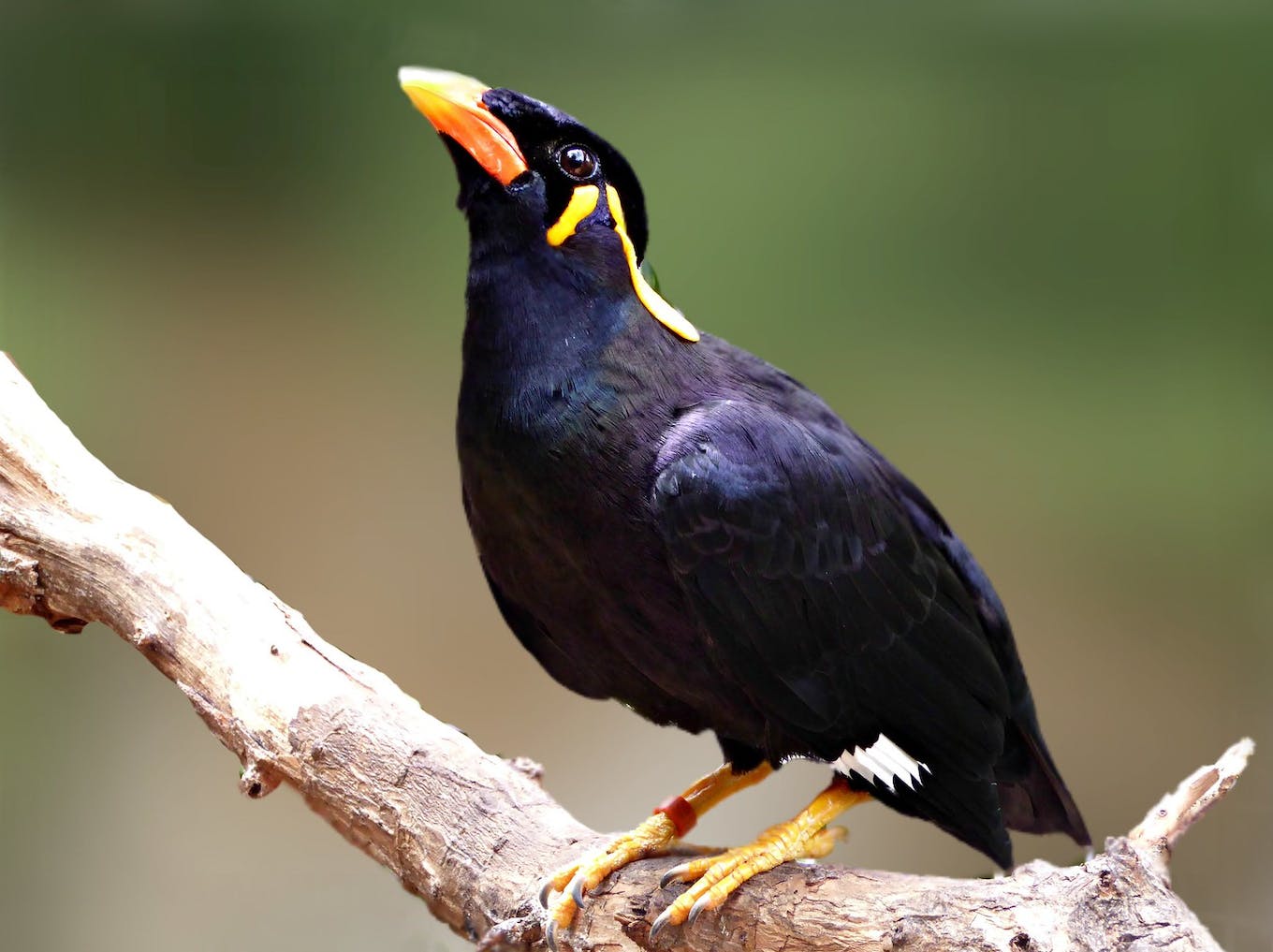 The charm and eloquence of the Nias hill myna, with its remarkable ability to mimmick the human voice, has made them very popular pets. So popular, in fact, that they’re being driven to extinction in the wild by trappers, as demand for the birds — which sell for between US$500 and $1,500 — far exceeds their capacity to breed in captivity. Their population has dwindled to a few hundred limited to the Barusan Islands off the coast of Sumatra, Indonesia. A local organisation Ecosystem Impact has been working to conserve them through patrols and conservation breeding efforts. 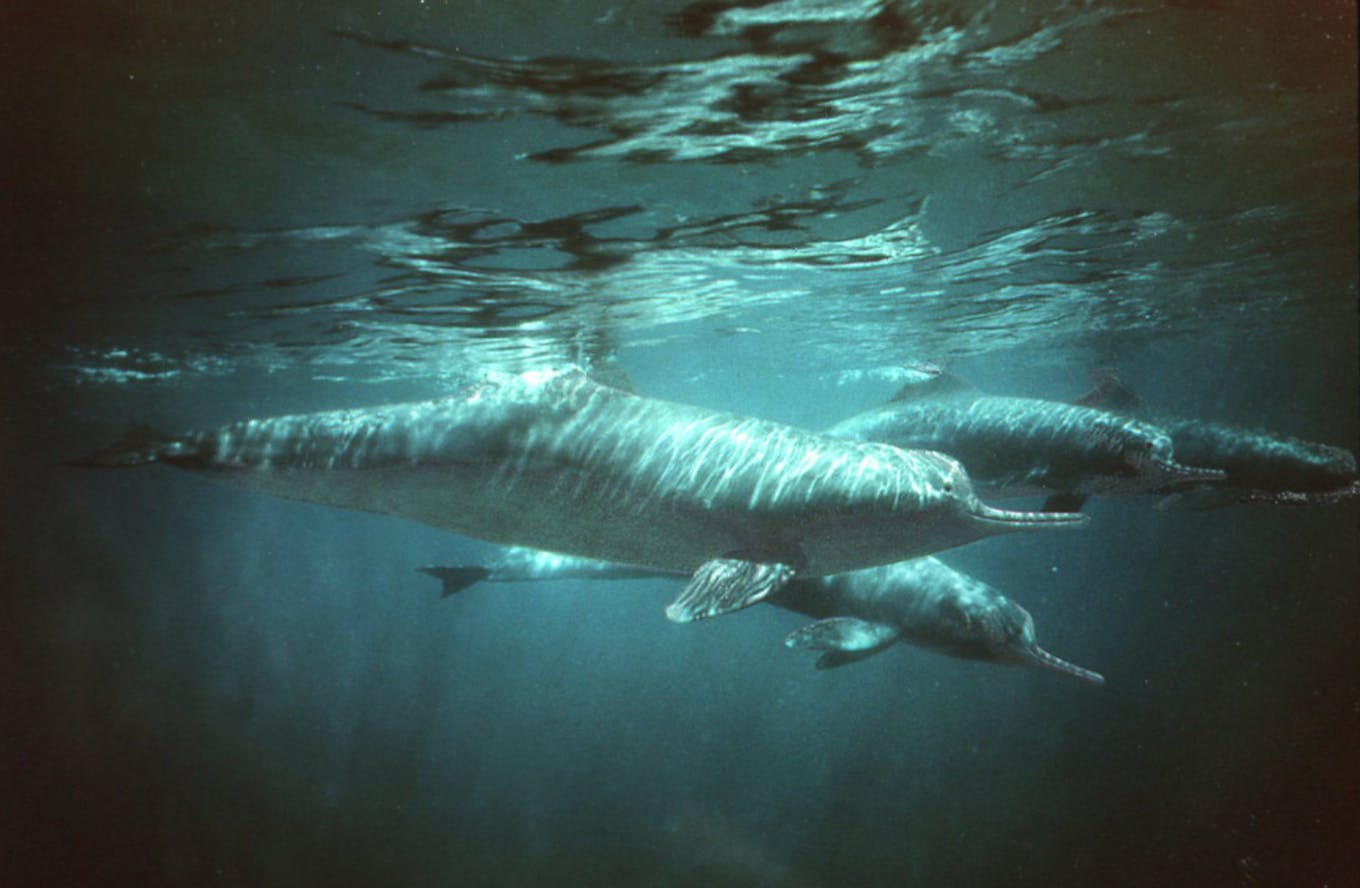 Researchers say that a few Baiji may still exist in the murky waters of the Yangtze but that the population is no longer viable. Image: Marinebio.org

The Yangtze river dolphin, also known as baiji (white dolphin) or Goddess of the Yangtze, is — or possibly was — one of the world’s four river dolphins species. Evolutionarily unique, the baiji diverged from all other whales and dolphins more than 20 million years ago. A gregarious species typically found in groups, the baiji is distinguishable for its long, slightly upcurved snout, blue-grey colour and highly developed sonar for finding prey in the riverbed. Overfishing, dams, boat collisions, and pollution have led to a critical decline in the species, which was declared functionally extinct — that is, their numbers are too small to support a viable breeding population — in 2006. The last confirmed sighting was in 2007. In 2016, a group of conservation volunteers claim to have spotted a pale animal with a long snout repeatedly leap out of the water in Anui province, so there remains hope that the species is clinging on in one of the world’s busiest rivers. 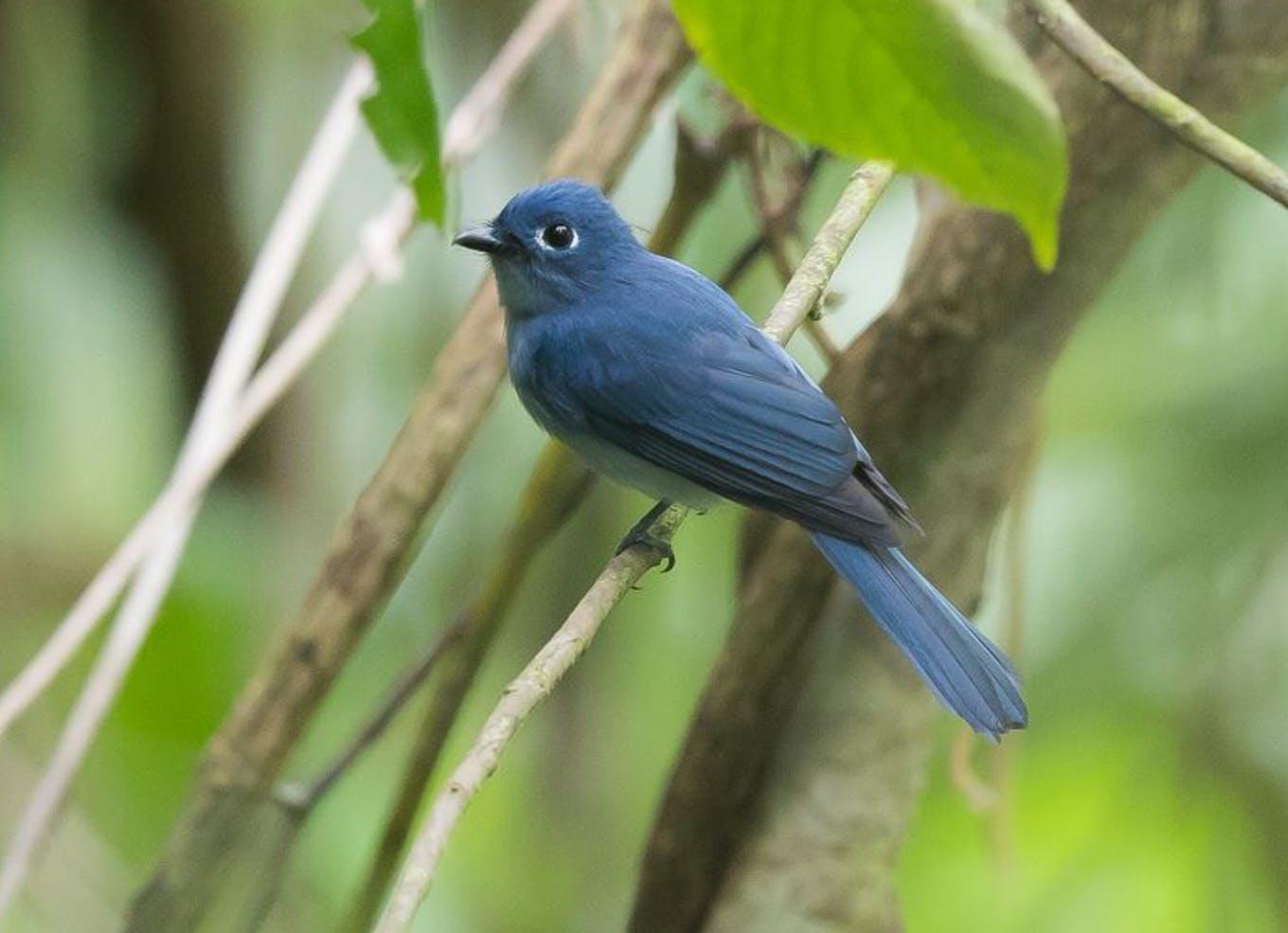 The Cerulean Paradise-flycatcher is one of a few bird species found only on the Sangihe islands, which are located roughly halfway between Sulawesi, Indonesia and Mindanao, the Philippines. The remaining primary rainforest on Mount Sahendaruman, an extinct volcano in the southern part of Sangihe, is the last stronghold of an unmistakeable all-pastel blue bird with a conspicuous white eye-ring. This habitat is under threat from mining since the passing of Indonesia’s controversial pro-business Omnibus law. A Canadian gold mining company has been granted a concession that covers more half of Sangihe, but it is not clear whether the mining permit is valid. BirdLife, in partnership with local NGO, Burung Indonesia, has been engaging the communities to protect the remaining mountain forest. “We are trying to constantly engage government, communities and stakeholders to make sure this area doesn’t get mined. But we remain very concerned because even a slight loss to Mount Sahendaruman vegetation will be bad news,” says Jain. 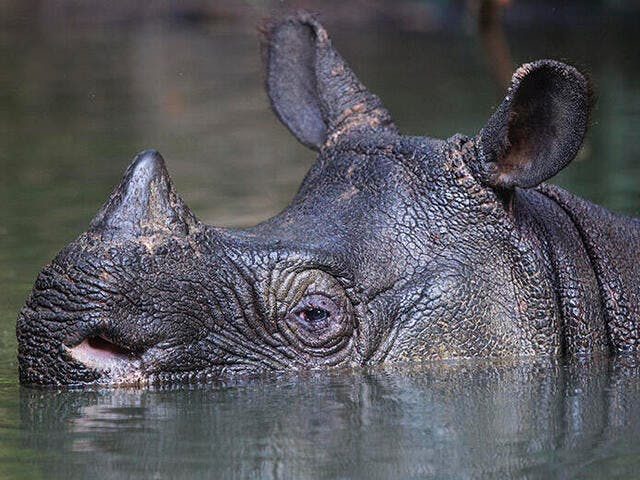 Javan rhinos once roamed from northeast India throughout Southeast Asia to Sumatra. The are now only found in an isolated part of Java, Indonesia’s most heavily populated island. Image: WWF

Moon-light grey with a 10-inch horn and a body like an armoured combat vehicle, Javan rhinos were once populous from India to Indonesia. Trophy hunting, poaching for traditional medicine and habitat loss have driven one of the world’s most threatened large mammals to the brink, and a population of less than 70 individuals remains, confined to one park, Ujung Kulon National Park, on the southwestern tip of Java. Little is known about the role Javan rhinos play in the ecosystem, but they are believed to aid seed dispersal for a wide variety of plants. They are highly vulnerable to habitat disturbance. Tsunamis, rising sea-levels, and volcanic eruptions threaten the coastal Ujung Kulon National Park, so conservation efforts include establishing a second viable population of rhinos away from the park.