Analysis: Which countries have sent the most delegates to COP24?

On Sunday, the 24th Conference of the Parties (COP24) got underway in Katowice in Poland, bringing thousands of negotiators together for two weeks of intensive climate talks.

COP24 is widely considered to be the most important UNFCCC (United Nations Framework Convention on Climate Change) international climate negotiations since the Paris COP in 2015. The latest talks come before an end-of-year deadline to produce a “rule book” to flesh out the detail of the Paris Agreement, such as how the ratchet mechanism will work for ramping up ambition on emissions reductions.

At Paris, there was a provisional list of around 15,000 participants present on behalf of a particular country, or “party” – plus another 8,000 unofficial delegates – while at last year’s COP in Bonn, there were around 11,300 participants.

So, how many are present in Katowice? Carbon Brief dives into the data to find out.

According to the provisional list (pdf) published by the UNFCCC, there is a grand total of 22,771 registered participants at COP24. This includes 13,898 people representing specific parties, 7,331 from observer organisations – such as scientists, business groups and various non-governmental organisations – and 1,541 journalists.

At just under 14,000, the total number of party delegates is smaller than in Paris, but larger than in Bonn last year.

Leading the table at COP24 is Guinea with 406 delegates. This is 86 fewer than they sent last year, but still puts it in first place with 169 more people than the Democratic Republic of Congo (DRC) in second. In third are the hosts of this year’s COP – Poland – with 211 delegates.

Making up the rest of the Top 5 is Côte d’Ivoire – whose delegation of 208 people rather than 492 last year sees it drop from first place to fourth – and Indonesia with 191.

After Poland, the next largest European delegation is France, in sixth place with 188 people. Germany comes in 10th with 153 and the European Union (which is considered a party at COPs) is 25th with 83. The UK’s delegation of 52 people is the 40th largest in Katowice and seven more than it brought to COP23.

Overall, about the same number of delegations have got smaller (94) this year as they have larger (95). The biggest increases are for Poland, Nigeria and Sudan, with 134, 64 and 63 more delegates than at COP23, respectively. The largest decreases in delegation size are all for African countries – with Côte d’Ivoire (-284), Morocco (-149) and Congo (-114) seeing the largest reductions.

The map and chart below present the delegation sizes across all the countries represented at COP24. The darker the shading, the more delegates that country has brought along. Mouse over the countries to see the number of delegates and the population size.

The full list of party delegation sizes and their gender balances can also be found here. The UNFCCC list provides the delegate names. 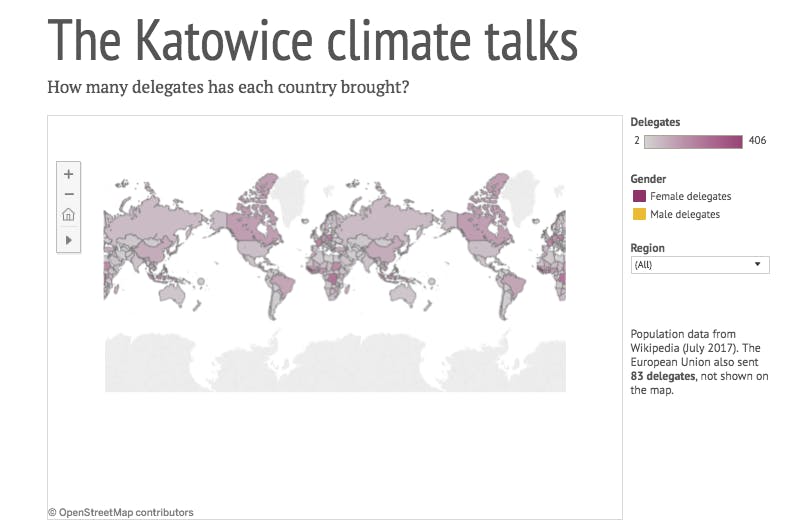 The UNFCCC’s list provides the name and title of each registered participant. This means it is possible to work out the balance of men to women that each country has sent to Katowice. (It should be noted that the gender balances presented here are based on the titles designated by UNFCCC and not by Carbon Brief.)

On average, party delegations at COP24 are split 63 per cent male to 37 per cent female, which is almost identical to the 62 per cent-38 per cent split at COP23 in Bonn.

Thirteen countries have delegations with a 50-50 ratio, including Angola (26 delegates), Bolivia (20) and Latvia (20). Last year, Latvia was one of three countries to send an all-female delegation. This year, only Kyrgyzstan (seven delegates) has.

In contrast, eight countries have all-male delegations at COP24, including Pakistan (17 delegated), Tajikistan (10) and Barbados (8).