Analysis: Global fossil-fuel emissions up 0.6 per cent in 2019 due to China

After increasing at the fastest rate for seven years in 2018, global CO2 emissions are set to rise much more slowly this year—but will, nevertheless, reach another record high.

The data is being published in Earth System Science Data Discussions, Environmental Research Letters and Nature Climate Change to coincide with the UN’s COP25 climate summit in Madrid, Spain.

The growth of global emissions in 2019 was almost entirely due to China, which increased its CO2 output by 0.26GtCO2. The rest of the world actually reduced its emissions by -0.02GtCO2, thanks to falling coal use in the US and Europe, as well as much more modest increases in India and the rest of the world, compared to previous years.

The GCP researchers say that “a further rise in emissions in 2020 is likely” as global consumption of natural gas is “surging”, oil use continues to increase and, overall, energy demand rises.

Despite the rapid rise and falling costs of renewables in many parts of the world, the majority of increases in energy demand continue to be met by fossil fuels. For example, gas met around two-fifths of the increase in demand in 2018, against just a quarter coming from renewables.

Overall, human-caused CO2 emissions, including those from FF&I and land use, are projected to increase by 1.3 per cent in 2019. This is driven by a 0.29GtCO2 (5 per cent) increase in land-use emissions – including deforestation –  which is the fastest rate in five years. While land use only represents around 14 per cent of total 2019 emissions, it will contribute more than half the increase in emissions in 2019.

While more modest than in recent years, the increase in emissions in 2019 puts the world even further away from meeting its climate change goals under the Paris Agreement.

The GCP is a group of international researchers who assess the world’s sources and sinks of CO2. It has published an annual global carbon budget report since 2006.

Its newly released global carbon budget for 2019 provides estimates of CO2 emissions from FF&I in each country, as well as global emissions from changes in land use. It also estimates how CO2 has accumulated in the atmosphere and how much was absorbed by the land and oceans.

The figure below shows global CO2 emissions from fossil fuels, divided into emissions from China (red shading), India (yellow), the US (bright blue), EU (dark blue) and the remainder of the world (grey). Emissions are expected to rise to a new high of 36.81GtCO2 (±1.8) in 2019, with China and the US as the two largest emitters. 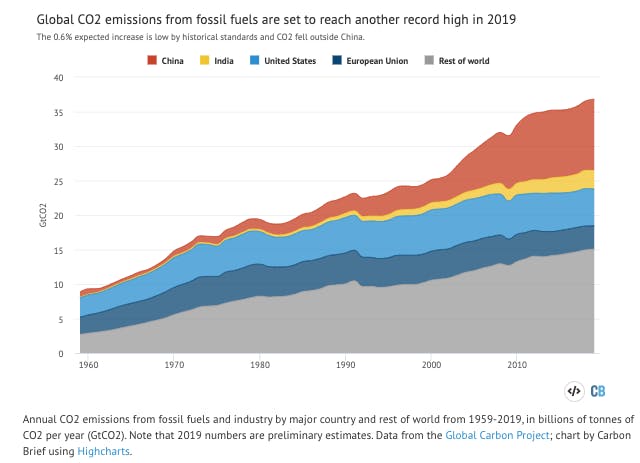 While 2019’s expected 0.6 per cent growth is low by historical standards, it is also clear that there is little evidence from the data that peak emissions are likely to occur in the near future. The GCP team suggests that “peak CO2 emissions could remain decades away” given likely continued growth of emissions from oil and gas.

Although overall emissions continue to increase, the global average per capita has been flat for the past 8 years. The figure below shows global average emissions per-capita for each year from 1959 through 2019. 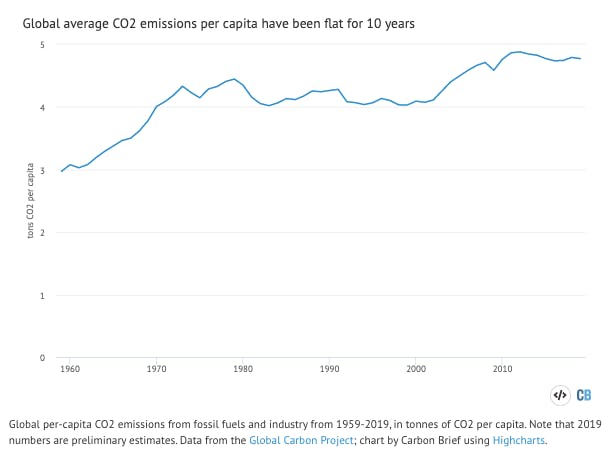 Per-capita emissions fell slightly in 2019 and are now down to 2010 levels. However, these global per-capita values disguise large differences within and between countries. Population growth is generally not occurring as quickly in countries with higher emissions.

Large declines in US and slow growth in rest of world 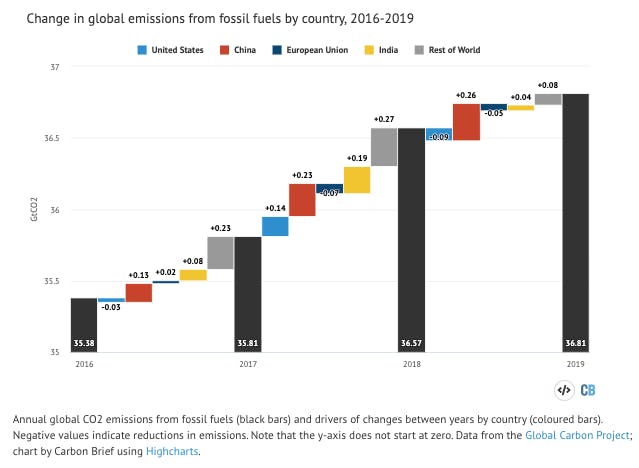 Overall, CO2 emissions from FF&I are expected to rise by around 0.6 per cent in 2019, with a fairly wide uncertainty from as little as -0.2 per cent to as much as 1.5 per cent, given the limitations of data available so far. The GCP will publish more complete 2019 numbers in early 2020.

The US is expected to see the largest change between 2018 and 2019 of any country: from a large (0.14GtCO2) increase during 2018 to a modest decline (0.09GtCO2) in 2019. As Carbon Brief reported last year, a large portion of the increase in US emissions in 2018 was associated with increased energy use from a cold winter followed by a hot summer, though increases in industrial and transportation emissions driven by a growing economy also played a role.

The GCP correctly forecast last year that the 2018 increase was something of an anomalous blip and that US emissions would begin to decline again in 2019, as cheap gas, wind and solar continue to displace coal and temporary weather effects fade.

US emissions have fallen by 13 per cent since their 2005 peak, though they remain above the recent low levels achieved in 2017.

China is expected to be responsible for effectively all the increase in global CO2 emissions in 2019, with a rise of 0.26GtCO2 – larger than the global total increase of 0.24GtCO2. This represents a 2.6 per cent increase in Chinese emissions from 2018 – with an uncertainty of 0.7 per cent to 4.4 per cent – and follows a similar increase of 2.3 per cent in  2018.

Chinese coal emissions are expected to increase by 0.8 per cent, with those from oil by 6.9 per cent and gas by 9.1 per cent. Cement production emissions are due to rise by 6.3 per cent. These increases are driven by continued stimulus spending by the Chinese government and related output from energy-intensive industries, such as steel production.

A 2 per cent increase in coal emissions is due to be the largest driver, though oil emissions are also expected to increase by 1.5 per cent and natural gas by 2.5 per cent, while cement emissions should remain unchanged.

There is wide uncertainty in Indian emissions for 2019 due to an above-average monsoon year leading to flooded coal mines and high hydropower generation. The Indian economy has also slowed, contributing to a slower-than-average increase in emissions compared to prior years.

The increase in rest-of-world emissions in 2019 – 0.07GtCO2 – would be much smaller than the 0.2GtCO2 average over the past decade and would be the slowest increase since the year 2013.

Increases in global CO2 emissions in 2019 are not being driven by coal. In fact, emissions from coal are expected to decline by -0.9 per cent, with an uncertainty range of -2 per cent to 0.2 per cent. (Analysis recently published by Carbon Brief estimated that global electricity generation from coal was set to decline by a record 3 per cent in 2019.)

The total emissions for each year between 2016 and 2019, as well as the fuels that were responsible for the change in emissions, are shown in the figure below.

This reflects declines in coal use in the US and Europe, which have largely offset increases in China, India and other developing countries in southeast Asia. Global CO2 emissions from coal remain below a peak seen in 2012.

While natural gas is responsible for only around half the CO2 per unit of energy generated compared to coal, gas use has increased substantially in recent years and is not only being used to replace coal. These numbers are also not accounting for the climate effects of methane released during natural gas production and distribution.

The figure below shows global CO2 emissions from different fuels over time. While coal emissions increased rapidly in the mid-2000s, it has plateaued since 2013, while gas and oil emissions have steadily grown.

The GCP researchers suggest that “continued long-term growth in both oil and natural gas use is likely” as per-capita oil consumption in countries such as China and India is still a small fraction of that in the US and EU. Increased exports of liquified natural gas to Asia is lowering traditionally high prices and increasing use. While some of this is displacing coal, it may also be meeting new demand that would otherwise come from clean energy sources.

As the GCP researchers conclude:

“While natural gas may be necessary to aid a transition from coal to non-fossil energy in some national circumstances, expanded natural gas use without CCS [carbon capture and storage] could limit the ability to meet ambitious climate targets.”

Every year, the GCP provides an estimate of the global carbon budget. This is based on estimates of the release of CO2 through human activity and its uptake by the oceans and land, with the remainder adding to atmospheric concentrations of the gas.

(This differs from the commonly used term “carbon budget”, referring to the amount of CO2 that can be released while keeping warming below global limits of 1.5 or 2C.)

The most recent budget, including estimated values for 2019, is shown in the figure below. Values above zero represent sources of CO2 – from fossil fuels, cement and land use – while values below zero represent “carbon sinks” that remove CO2 from the atmosphere. CO2 emissions either accumulate in the atmosphere, or are absorbed by the oceans or land vegetation.

According to the GCP estimates, about 44 per cent of CO2 emitted in 2019 will accumulate in the atmosphere. The remainder will have been taken up by carbon sinks – 33 per cent by the land and 22 per cent by the ocean. Land uptake is thought to have been unusually high in 2019 and one of the highest levels in the past few decades, though the cause of this is currently unclear, the authors tell Carbon Brief.

The Global Carbon Budget report projects that the average atmospheric CO2 concentration in 2019 will be 410ppm. This compares with an average of 407ppm in 2018.