After Russian invasion, gas is no longer a viable 'bridge' fuel for energy transition: report

As the cost of renewables plummets and the price volatility of natural gas increases, the fossil fuel can no longer be relied on as a lower-emissions bridge fuel to clean energy, a new study finds. But subsidies are keeping the cost of gas low in some Asian markets, slowing renewables adoption.

Natural gas has been persistently touted as a greener alternative to carbon-intensive coal, the chief agitator of climate change, largely because it emits less carbon dioxide compared to other fossil fuels when burned. The gas industry and lobbies maintain that it is a crucial ‘bridging fuel’, supplementing patchy, less-established cleaner forms of energy.

But the falling cost of renewable energy and battery storage combined with the price volatility of gas have undermined the argument that the fossil fuel is a cornerstone of the energy transition, a new report from TransitionZero, a climate analytics non-profit backed by politician-turned-activist Al Gore, has found.

Russia’s invasion of Ukraine has triggered an energy supply and security crisis, and global gas demand is expected to retract this year due to high prices and market uncertainty, the International Energy Agency (IEA) has said.

Using an index that tracks the carbon price needed to incentivise a switch from coal to clean electricity, known as the Coal to Clean Carbon Price Index (C3PI), TransitionZero found that the cost of moving to renewables has plummeted compared to the cost of shifting from coal to gas.

A price on carbon increases the cost of fossil fuels relative to lower carbon options, and is seen as an important way to clean the energy system.

The study found that the carbon price needed to incentivise the switch from coal to renewable energy — specifically, solar and onshore wind — and battery storage globally is — US$62 per tonne of carbon dioxide (tC02) in 2022, compared to US$235/tCO2 for the shift from new coal to gas this year.

Because of the savings that can be made by leapfrogging coal to renewables, “gas is no longer a viable bridging tool,” the report’s authors argued. 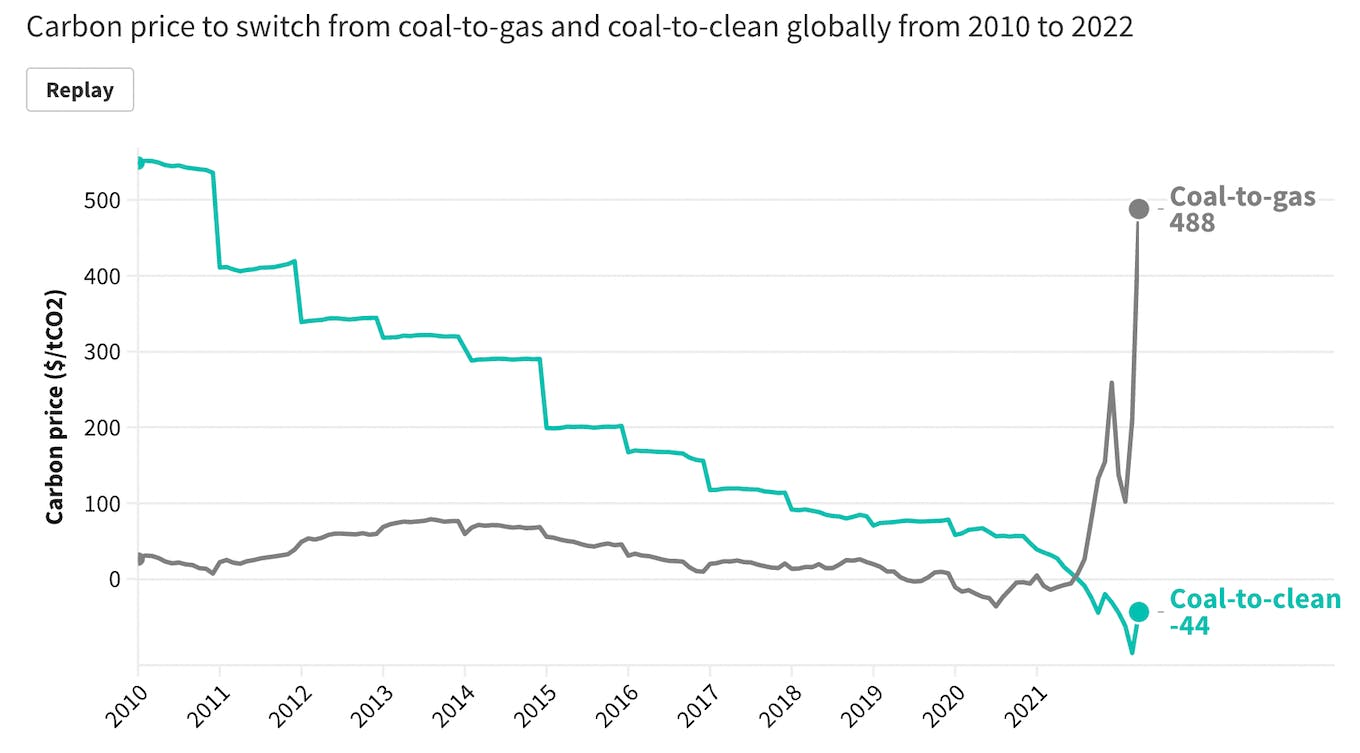 The price of carbon needed to switch from coal-to-gas and coal-to-clean globally between 2010 to 2022. Source: TransitionZero

Though globally the role of gas as a bridge fuel looks less competitive than before Russia’s invasion, there is a variation across markets.

In some Asian countries, energy subsidies are keeping the price of fossil fuels artificially low, hurting the competitiveness of renewables, which is still a nascent industry in some countries, particularly in Southeast Asia, Jacqueline Tao, analyst, TransitionZero, told Eco-Business.

In Indonesia, where coal and gas are heavily subsidised, the carbon cost of switching to renewables is among the highest in the world, costing US$88.59, compared to just US$12.92 for a shift from coal to gas.

Due to regulations that continue to favour coal, Japan also has a high coal-to-clean fuel switch price.

The price of switching to clean energy is negative in Europe due to rising carbon prices resulting from the Emissions Trading Scheme, the region’s carbon marketplace, as well as policy support for renewable energy, and Russia’s invasion of Ukraine, which has led to a significant increase in the price of coal, the report noted. 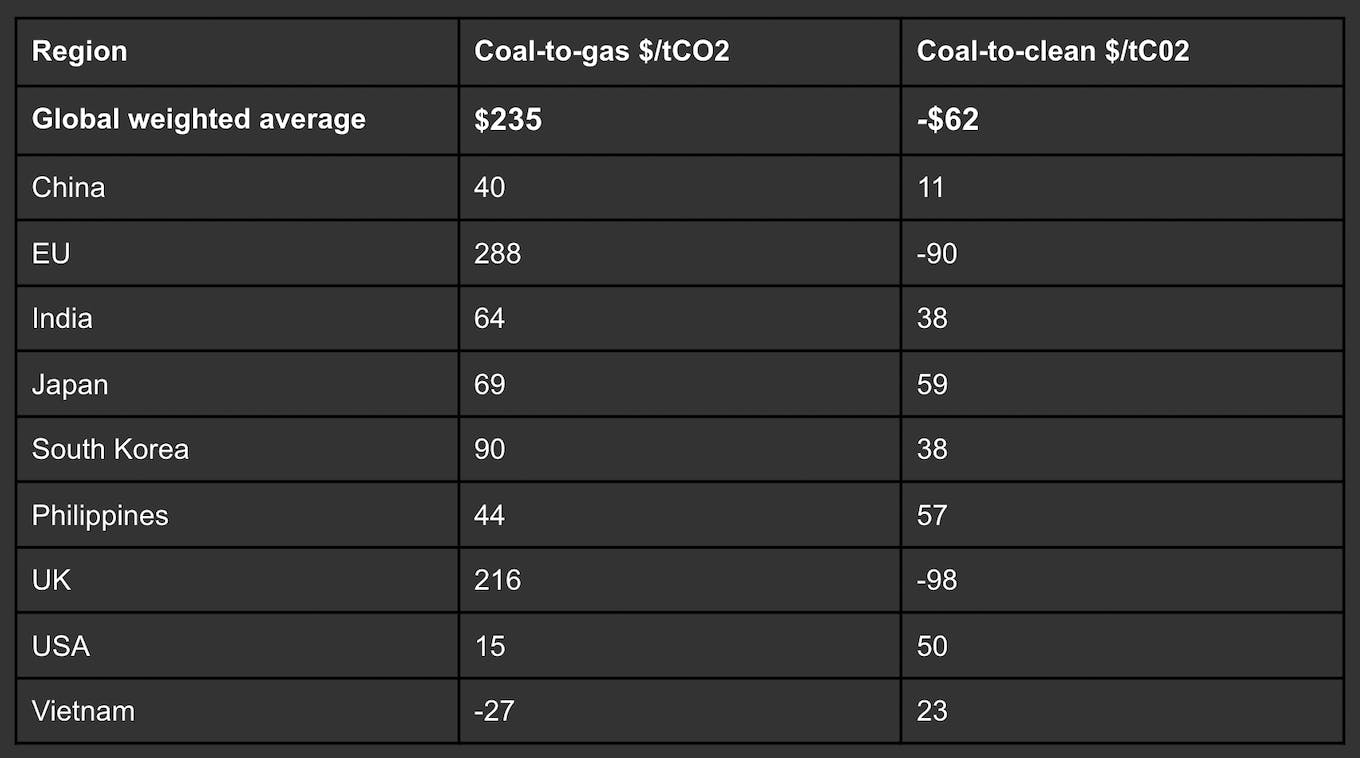 A region breakdown of the carbon price needed to incentivise a switch from coal to gas and coal to clean energy, 2022 average ($USD/tCO2). Source: TransitionZero

Overall, all regions show a clear downward trend in the cost of switching from coal to renewables. This calls into question the 615 gigawatts (GW) of gas and 442 GW of coal under construction and proposed globally, the report pointed out.

IEA has said that if the world is to curb emissions to net-zero by 2050, and avoid the most dire consequences of climate change, no new oil and gas fields can be developed from now on.

Asia Pacific’s major gas producers, including China, Australia, Malaysia, and Indonesia, have been promoting natural gas a key transition fuel, and Russia, the world’s second largest gas producer, positioned gas as an “eco-friendly” fuel source that can help Southeast Asia move beyond polluting coal in a seminar in July.

Asia is projected to account for 60 per cent of global gas demand growth over the next 30 years, according to Wood Mackenzie, a consultancy, with the largest increase expected in emerging markets across South and Southeast Asia. By 2050, a third of the world’s gas will be consumed by the region, up from about a fifth in 2020.

However, Tao said that she expected to see a continuation of the downward trend in renewables prices, and an even stronger case for a shift from coal to clean energy, rather than gas, over the next 24 months.