Indonesian Activists staged a protest outside the Chinese Embassy against plans to fund a massive hydroelectric power dam in North Sumatra, home to the Tapanuli orangutan.

Activists in Indonesia have called on the Chinese government to withdraw funding for a hydroelectric dam that threatens to fragment the only known habitat of the most endangered great ape on Earth.

Representatives of the Indonesian Forum for the Environment (Walhi) staged a demonstration on May 8 outside the Chinese Embassy in Jakarta in protest at Beijing’s planned funding for the $1.6 billion project, which is part of China’s Belt and Road initiative.

The protesters argued that the North Sumatra Hydro Energy project threatened the Batang Toru forest in North Sumatra province, home to the Tapanuli orangutan (Pongo tapanuliensis), a species described just last year but already perilously close to extinction with a population of fewer than 800 individuals. Over the course of three generations, the ape has lost 83 percent of its population as its habitat in the Batang Toru ecosystem has been fragmented.

The protest coincided with a state visit to Indonesia by Chinese Premier Li Keqiang, where he was welcomed by President Joko “Jokowi” Widodo to discuss a slew of bilateral partnerships that have flourished since China introduced its Belt and Road initiative in 2013.

More than 50 hectares [124 acres] of forest have been cleared [for the project] and each month, the forest clearing intensifies.

Dana Prima Tarigan, the executive director of Walhi’s North Sumatra chapter, told reporters that the protest was meant to “convey our aspiration to save the Batang Toru forest in North Sumatra province, where China is funding the development of a hydroelectric dam.”

The protesters also sought to submit an open letter to the embassy in which they asked embassy officials to facilitate talks with Chinese investors and funders of the project in order to make them aware of the environmental and social risks posed by the project.

“We believe that every foreign investment in our country, whether from China or elsewhere, shouldn’t contribute to the erosion of people’s livelihoods and more importantly to the extinction of a critically endangered species,” the letter read.

The protesters, however, failed to meet with embassy staff and were removed from the premises by security officers because they did not have a permit to stage a protest.

The planned hydropower plant was announced in 2012 and will be the largest on Sumatra once completed by 2022 as planned. The Indonesian government considers it a priority project under the Jokowi administration’s wider infrastructure-building push.

The project will occupy 6.45 square kilometers (2.5 square miles) of land along the Batang Toru River in South Tapanuli district. It will involve the construction of a powerhouse, a substation, headrace and tailrace tunnels, a reservoir, spillway and related infrastructure, the installation of turbines, generators and transformers, and the laying of transmission lines.

If it proceeds, the dam will flood crucial parts of the ape’s habitat, while chopping up its remaining habitat with new roads and power lines.

Major lenders have stayed away from the project, likely because of the potential environmental damage, with the World Bank backing off from funding the project.

But this hasn’t slowed down Chinese developers. The state-owned Bank of China has pledged financing for the dam, while state-owned Chinese utility Sinohydro has signed on to handle the construction.

The project would dramatically change 96 square kilometers (37 square miles), or about 8 percent, of the Tapanuli orangutans’ range in the next four years, according to a new study published in the journal Current Biology. Long before the dam goes into operation, its construction would impact the orangutans’ habitat by carving through the forest to open up access roads and pathways for power lines. Such openings increase the odds that farmers will clear more land for agriculture or hunters will enter the area.

“More than 50 hectares [124 acres] of forest have been cleared [for the project] and each month, the forest clearing intensifies,” Walhi’s Dana said.

While an 8 percent reduction in habitat might not seem significant, the ape’s remaining habitat is already compacted into a tiny area less than a tenth the size of Sydney, Australia.

“If it proceeds, the dam will flood crucial parts of the ape’s habitat, while chopping up its remaining habitat with new roads and power lines,” Jatna Supriatna, an author of the new study and researcher at the University of Indonesia, said in a statement.

The project also threatens to displace indigenous communities, who refuse to sell their lands at the prices the developers have offered. Last year, a protest by locals from three villages against the development of the dam turned violent.

Activists are also alarmed over the project’s environmental impact assessment, known as the Amdal, which contains disturbing details on how the dam would wreak havoc on locals’ farms, according to Dana.

“The dam will siphon river water for 18 hours, so around 1,200 hectares [2,965 acres] of farms on the riverbank will be dried for 18 hours,” he said. “And then during the next six hours, the sluice will be opened, flooding the farms.”

Dana said this would threaten 100,000 people whose livelihoods are dependent on the farms and other resources provided by the Batang Toru ecosystem. 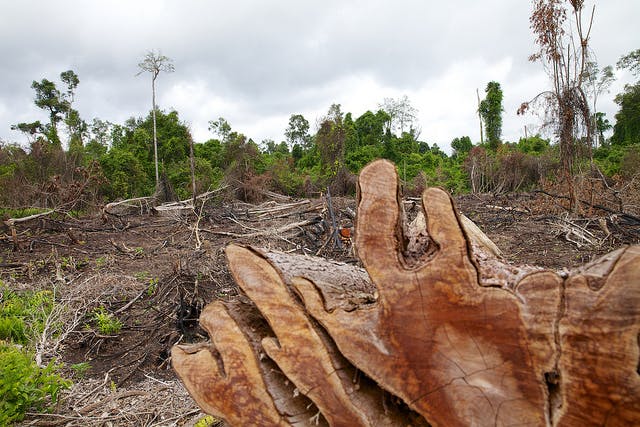 Clearing land poses a threat to the newly discovered orangutan species and jeopardises the livelihood of 100,000 people dependent on resources provided by the Batang Toru ecosystem Image by: CIFR, CC BY-NC-ND 2.0

There are also key omissions in the environmental impact assessment document, including the fact that the project site sits on top of a tectonic fissure.

“The document doesn’t mention anything about risk of earthquakes, while under the project lies the Toru [fault],” Dana said. “Meanwhile, the project includes the digging of a tunnel, which will increase the risk of an earthquake. But this risk wasn’t studied. And other risks on the loss of livelihoods weren’t studied either.”

Operations from a nearby gold mine, operated by PT Agincourt Resources, a subsidiary of Hong Kong-listed miner G-Resources Group Ltd., could exacerbate the environmental damage from the dam, Dana said. He noted that the Amdal document contained an agreement for PT Agincourt Resources to dump its waste through the dam. In 2012, the company temporarily stopped the operation of its Martabe gold mine following an ongoing dispute with local residents over the firm’s waste management.

“Once the sluice gate is opened, the waste from PT Agincourt will be dumped,” Dana said. “We can see how dangerous it is for the river ecosystem and people living on the riverbank.”

Dana said Walhi might file a lawsuit against the dam developer if the project went through, on the basis of irregularities in the Amdal document.

“We’ll go to the state administrative court to stop the permit if the financiers don’t cancel the project,” he said. “As I said before, the Amdal document doesn’t contain any assessment on the risk of earthquakes and the impact on people living on the riverbank.”

While the central government has not made a decision on the future of the project, the Ministry of Environment and Forestry has acknowledged the issues and vowed an assessment of the potential impact from the power plant project on the orangutan habitat.

“It’s better for all parties to sit together to share information comprehensively,” Wiratno, the ministry’s director general for ecosystem and natural resource conservation, told reporters on Tuesday. “I’m ready to facilitate the meeting [between all stakeholders].”

Previously, he said he’d see the impact of the project first before deciding on whether to allow it to proceed.