The recent haze in Southeast Asia has sparked renewed calls for alternatives to palm oil products. In this interview, Forum for the Future founder Jonathon Porritt tells Eco-Business why the industry - which also provides thousands of livelihoods worldwide - needs a new business model, not boycotts.

The haze currently enveloping Southeast Asia has refocused the world’s attention on the perennial dilemma surrounding the palm oil industry: The world’s most widely used vegetable oil, praised for its versatility and low cost, is also one of the most vilified crops around, thanks to its role in the logging and burning of tropical rainforests.

Clearing forests to make way for plantations is rampant in the industry, and has been linked to rising greenhouse gas emissions and the destruction of some of the most biologically diverse areas on earth. Growing awareness of these issues has prompted calls for palm oil companies to stop cutting down forests, and sparked boycotts of consumer products containing the substance.

But the truth of the matter is that palm oil, used in everything from food to cosmetics to biofuels, is the most land and resource efficient vegetable oil, says renowned sustainability expert Jonathon Porritt in a recent interview. The oil, of which 52 million tonnes are consumed annually, also contributes to alleviating poverty in the Southeast Asian, African, and Latin American nations where it is grown, he tells Eco-Business. 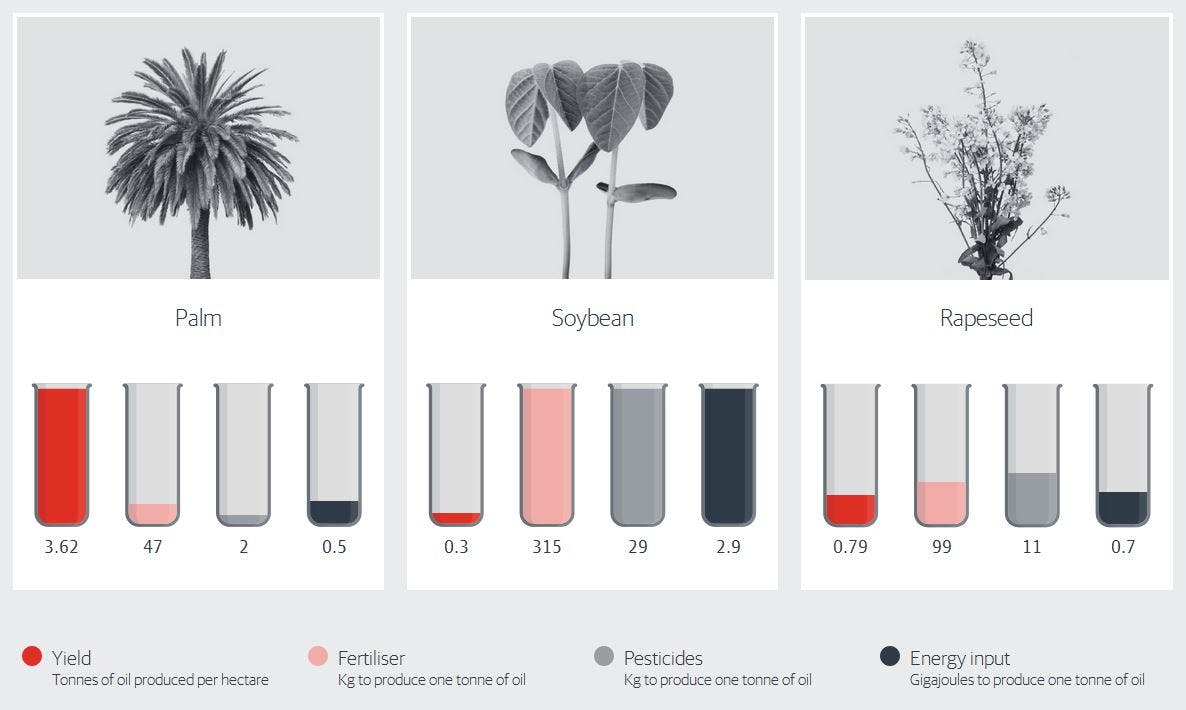 The resource efficiency of palm oil compared to other vegetable oils. Image: The Guardian

Therefore, refusing to cut down a single tree isn’t necessarily the best way forward for industry, says Porritt, who is the founder director of global sustainability non-profit Forum for the Future.

What the industry needs instead is a way to distinguish between areas which have too much carbon stock or socio-economic value to convert to plantations and land that is suitable for cultivation, he adds.

This is precisely what some of the world’s biggest producers and buyers of palm oil set out to do last year, when they decided to fund a study on what qualifies as high carbon stock (HCS) forest, and how companies and governments can protect ecologically important areas and accommodate the rights and livelihoods of local communities.

Funded by palm oil giants including Cargill, Musim Mas, Sime Darby and Wilmar, along with consumer goods firm Unilever, the project is carried out by global experts in the fields of biomass, soil science, remote sensing, and socio-economic issues. It began last November and is due to be completed at the end of this year. 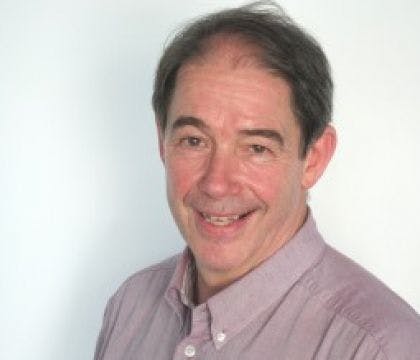 He says the crop “has generated significant wealth for Indonesia and Malaysia, but at a considerable cost”. The study offers a new business model which hopes to deliver the same benefits without the environmental degradation, he adds.

Drawing a line in the forest

The study recommends several steps to better protect human rights and maximise the socio-economic benefits of palm oil development, but at its crux is the HCS threshold, pegged at 75 tonnes of carbon per hectare.

Any areas where above-ground carbon, stored in vegetation, exceeds this figure should not be converted for oil palm. The same goes for areas where the soil has a layer of organic matter more than 15 cm thick, as this amounts to the same volume of stored carbon.

Areas that do not fall within these thresholds can be developed, but the carbon loss from clearing this land must be offset by protecting forests or rewetting peatland to ensure carbon neutral development, the study recommends.

Observers have pointed out that the HCS Study’s thresholds are far more generous than a parallel approach being developed by environmental groups Greenpeace, The Forest Trust (TFT) and other organisations - which says that anything with more than 35 tonnes of carbon per hectare should not be converted.

These disparities are because “our goal - balancing sustainability with the development benefits of palm oil - is completely different,” notes Porritt, adding that both groups are working together to find areas of convergence.

As the study nears completion - the first draft was released in June for public consultation, and the research team made the second executive summary available in early October - Porritt says the end goal is for the findings to be integrated into national legislation on land use and agricultural development.

But there are many steps to get there, the first of which is finding a common ground between the HCS Study and the HCS Approach by Greenpeace and TFT.

The method will also have to be tried out on actual concessions to make sure it is easy and cost-effective to implement, following which it must be adopted by the Roundtable on Sustainable Palm Oil (RSPO), the industry association, into its certification criteria for responsibly cultivated palm oil.

But “ultimately, these things only work if governments incorporate them into their jurisdiction,” notes Porritt. Setting a national threshold for forest areas that can’t be cleared will help ensure that big and small players alike do not clear ecologically important land, he says. This is opposed to the current situation where big companies make voluntary zero-deforestation pledges, while smaller ones may fly under the radar and continue destroying forests.

Getting such companies and smallholders - defined by RSPO as working on a plantation of less than 50 hectares - to stop burning or illegally clearing land remains a challenge when it comes to balancing development with forest protection.

Independent smallholders, who are not bound to sell to any one mill, may do whatever it takes to cut costs and maximise their margins, explains Porritt. This can include burning land to clear it cheaply, or converting ecologically important land to plantations.

However, “the new business model for palm oil will involve a process where smallholders are involved right from the start,” predicts Porritt. Indonesia already knows how to do this, he adds, pointing to the ‘plasma’ schemes as an example of palm oil development done right.

Under this programme, big companies lease out plots of land to smallholders and offer them competitive prices for their crops, along with helping them raise productivity and adopt sustainable practices such as zero burning.

“It is a co-created improvement in their living standards,” observes Porritt. Most new developments will involve some company-run plantations combined with attached smallholder schemes, he adds.

Despite the many efforts by companies, green groups, and governments to introduce more sustainable rules and practices into the global palm oil industry, the push towards sustainability is not happening fast enough, acknowledges Porritt. “The increased demand (from India and China) looks scary from a land use and sustainability point of view,” he says.

Oil palm is also expanding rapidly across Africa, with companies snapping up land across the continent. According to international non-profit Grain, over the past decade and a half, foreign companies have signed over 60 deals covering nearly 4 million hectares in central and western Africa for the development of oil palm plantations.

But Porritt draws hope from the fact that the industry - especially larger outfits - has undergone a “serious transformation” in the past decade.

There is also much untapped potential in meeting demand by improving productivity, adds Porritt. Some new strains of oil palm yield up to 30 per cent more, and much can be done to help smallholders increase their productivity, “which is always lower than plantation-based enterprises,” he notes.

RSPO also has a fund in place to help smallholders to attain the sustainability certification and foreign governments have also pledged to support forest conservation efforts, Porritt points out. The Norwegian government, for example, has pledged US$1 billion to help Indonesia conserve its forests.

But in Indonesia, which has the world’s fastest rate of deforestation, strong leadership from the government on solving issues such as rural development, legal loopholes around land use concessions has to be the starting point, says Porritt.

“These are their laws, people, and economies. It has to start there, and Singapore and others can help deliver that,” he notes.