The City Developments project was the first hotel to win the Green Mark Platinum award based on the strength of its energy and water efficient design elements.

Mention sustainability in the hospitality industry, and many people typically think of the cards laid out on hotel dressing tables and in bathrooms encouraging guests to reuse their bedsheets and towels in order to conserve water and reduce chemical waste from laundry. In reality, such hotels are only the scratching the surface of what can be done to reduce their environmental footprint.

One hotel leading the way in Singapore is W Singapore at Sentosa Cove.

Delegates at this year’s International Green Building Conference were given a glimpse into the inner workings of several highly-rated green buildings under the Singapore’s Green Mark scheme, including W Singapore, which was the first new hotel to receive the BCA Green Mark Platinum rating.

Developed by the Building and Construction Authority (BCA), the Green Mark scheme is its flagship rating system for a building’s sustainability performance.

A City Developments Limited project, W Singapore was opened in 2012, but received the Green Mark Platinum two years previously on the strength of its energy and water efficient design elements. The award was a milestone for the industry and a reaffirmation of CDL’s commitment to sustainability, according to Mr Kwek Leng Joo, CDL’s Managing Director. “Since 2008, we have committed to achieving a minimum BCA Green Mark Gold for all our new developments. We’ve managed to strike a balance between developing sustainable properties and making them financially marketable and viable,” he said.

About 3.5 per cent of the hotel’s total construction cost was invested into these green features, which are projected to save it an estimated 3.3 million kilowatt-hours in electricity and 22,200 cubic metres of water per year – at Singapore’s current utility rates, this means a saving of about S$930,000 and S$26,000 respectively.

Seen from the outside, W Singapore’s façade resembles that of any other modern building. This exterior, however, is designed specifically for thermal regulation, with external walls thicker than usual to reduce the amount of heat entering the interior.

Natural ventilation and day lighting are integrated into the layout of corridors and facility rooms. The entire hotel is oriented to minimise heat absorption while maximising the amount of daylight received, both for lighting purposes and to take full advantage of its solar photovoltaics system.

Some 370 square metres of photovoltaic panels are mounted on the hotel’s roof and the roof of its adjoining mall, along with quantities of rooftop greenery. Energy usage in the guest rooms is further reduced through passive features such as door sensors. Rooms overlooking the waterfront have non-air-conditioned balconies accessible through large glass doors – the doors also provide day lighting – and, if the doors are left open for more than 30 seconds, the room’s air conditioning will automatically turn off to conserve energy.

Meanwhile, behind the attractive lighting and rooftop greenery, most of W Singapore’s energy savings are derived from a high efficiency chiller system that guests never get to see – but which saves the hotel an estimated 2 million kWh per year, or S$560,000 in costs annually.

These, however, have less dramatic results in terms of water savings: the real savings come from the hotel’s landscaped grounds, where a rainwater harvesting system is installed to reduce the use of potable water for irrigation purposes. About 5,750 square metres of the grounds area are covered with greenery, and the rainwater harvesting system saves some 15,000 cubic metres of water annually on the irrigation of this area.

The smaller things that matter

In Singapore’s tropical context, where air conditioning sends the resource consumption of buildings sky-high, energy and water efficiency always stand out for the sheer numbers involved. 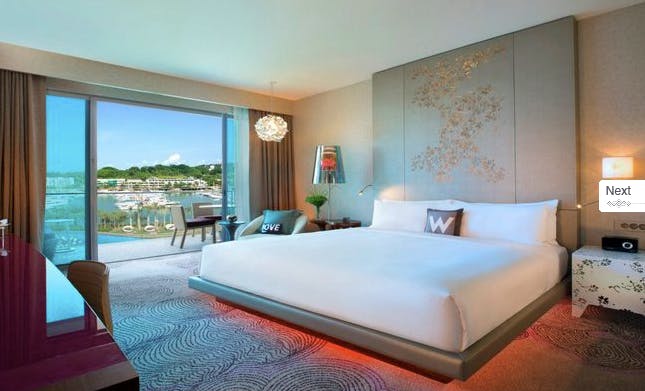 However, other details do add up too. W Singapore’s platinum rating covers a number of less outstanding design and operational features  that most guests will not even notice.

For example, much of the décor and furnishings are Green Label, including the laminates on many surfaces; the paint used throughout the building is low-VOC (volatile organic compounds) to minimise the impact on indoor air quality.

As a final touch, the hotel is making some extra efforts to educate and encourage hotel guests about sustainability.

The practice of reusing linens, already fairly well-accepted, is sweetened by offering reward points to those guests who reuse their towels and bedsheets for three nights. And the flat-screen televisions in all guest rooms is programmed with an educational presentation on the hotel’s green features, explaining how W Singapore reduces its environmental footprint and, incidentally, reassuring them that their comfort is not being compromised for sustainability.

Eco-Business.com’s special event coverage of the International Green Building Conference 2013 is brought to you by City Developments Limited (CDL).

The Building and Construction Authority of Singapore, in its third new green building masterplan, wants to use proven performance and information sharing to encourage more building owners to upgrade their buildings
BCA to introduce voluntary energy labeling for buildings