6 megatrends that will shape the future of cities

Experts at the recent Green Cities conferences in Sydney gazed into their crystal balls and identified six key trends that city leaders and building and real estate sectors cannot ignore if they want a sustainable and secure future.

Augmented reality, robot gardeners, and the Internet of Things: These are some of the trends that could help cities cope with growing challenges such as climate change, population growth and food insecurity, business and government leaders said at a recent conference in Sydney.

Speaking at the eleventh annual Green Cities conference, held from 8 to 11 March at Sydney’s International Convention Centre and themed ‘Fast Forward to the Future’, speakers idenfified several trends that will pose challenges for the building, real estate and urban planning sectors, but also ones that offer new opportunities to shape more sustainable, healthy, and inclusive spaces for urban dwellers.

Many of these trends involve the use of sophisticated technology or unconventional business models that are still in their early stages, and will require significant creativity and effort to mature, said experts at the conference.

As Chris Riddell, a futurist and keynote speaker predicted: “the next three years of innovation are going to define our next 100 years”.

What challenges will a changing global landscape present for the built environment sector in Australia and the rest of the world? And what are the opportunities in store for policy makers, business leaders and communities who help solve these challenges?

Speakers at the conference identified six key ideas that will transform the way the building industry works.

1. The shift to carbon neutral buildings

To lay out a plan for how the building sector – which currently accounts for 23 per cent of Australia’s emissions –can achieve this, GBCA launched a discussion paper titled, ‘A carbon positive roadmap for the built environment’ at the conference.

The paper highlights four key priorities to reach the sector’s target: promoting energy efficiency; driving investment in renewable energy infrastructure; increasing markets for net zero carbon products; and promoting offsets for remaining emissions. GBCA is also inviting the industry to give feedback on the paper via email by April 28.

Romilly Madew, GBCA’s chief executive officer, said that these strategies will be a cost effective way for buildings to achieve carbon neutrality.

She added: “It will also achieve other positive outcomes for Australia, such as efficient, comfortable and healthy buildings, energy security and a thriving renewable energy industry, jobs growth in emerging sectors, and enhanced biodiversity.”

Technology to collect and process a wide range of data is growing at an unprecedented rate, observed conference speakers.

From sensors that monitor pollution levels, traffic flows and population numbers in a city to wearable technologies that allow users to collect data about health and environmental factors, the influence of data on how designers, planners, and policymakers work is inescapable.

For one thing, data collection and analysis technology is a key enabler of solutions that make cities more sustainable, such as car-sharing and transport on-demand, said Colette Munro, chief digital officer at environmental services firm Aecom.

For example, monitoring pollution levels on every street in the city can reveal unhealthy air quality around areas such as schools, because cars are idling outside the school as caregivers wait to pick up or drop off students. Similarly, tracking air quality in buildings can identify specific rooms that are especially unhealthy, and help operations managers identify and minimise resource wastage and indoor air pollution.

But while data can allow decision-makers to improve how cities and buildings are run, it can also force them to confront some hard truths, noted Munro.

For example, data could reveal that a certain bus route in a city is hardly used, prompting a major rethink of how transport services are organised.

“To unlock data and use it for good, we have to confront things that are uncomfortable”, she added.

3. The rise of augmented reality

One megatrend that will define the year ahead is augmented reality, said Riddell. This is a technology that superimposes digital images on a user’s view of the real world; a prominent example is the popular game Pokémon Go.

Rana Abboud, an architect at Sydney-based firm BVN noted that the technology can achieve time, cost, and resource savings for the building sector.

While currently niche, augmented reality is expected to go mainstream within the next decade, said Abboud, adding that the concept, together with related technology virtual reality—which completely immerses users in a digital universe rather than superimposing it over the real world—is expected to be worth an A$120 billion industry by then. 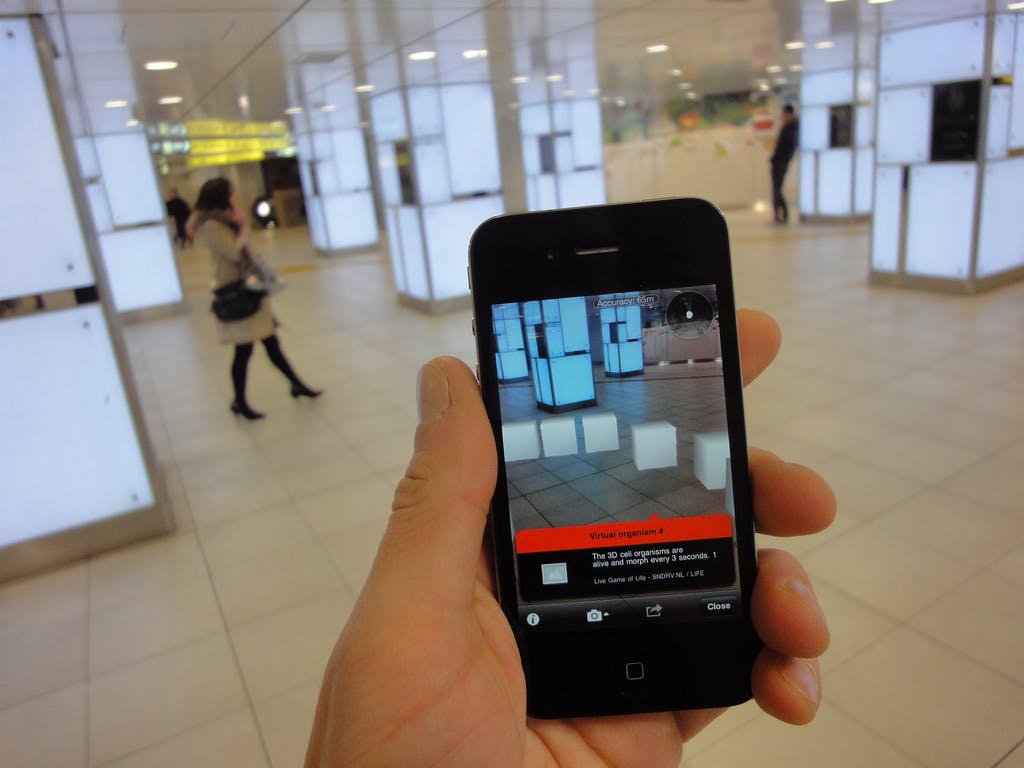 Augmented reality superimposes computer-generated images onto a user’s view of the real world. The technology, which is behind the popular game Pokemon Go, can also help save time, money, and resources in the building and construction sector. Image: sndrv, CC BY 2.0

Applications of the technology in the building sector include using it to project Building Information Modelling (BIM) systems directly on construction sites, which can allow designers and developers to discuss requirements in greater detail and reduce errors. It can also be used for tasks such as instructing workers on where to install fixtures or place goods deliveries more accurately.

The hardware and software for AR needs to be improved before it can enter the mainstream, and the industry also needs to develop the right workflows to make optimal use of the technology, said Abboud.

She added: “Anything that can reduce effort will help our industry”.

To unlock data and use it for good, we have to confront things that are uncomfortable.

4. The inevitable need to densify

Whether by choice or necessity, cities will inevitably need to increase population density, said experts at the conference. This may be for many reasons, including allowing people to live closer to their jobs, achieving greater efficiency for transport infrastructure, and accommodating growing populations without urban sprawl.

However, Penny Sharpe, a Labor party politician and shadow minister for the Environment and Heritage, Parliament of New South Wales, noted that communities in areas that have been zoned for densification—euphemistically called urban renewal—don’t always see the benefits.

“A community that has just found itself part of an urban renewal corridor is unlikely to look favourably on density,” said Sharpe. “They are more likely to see it through the lens of population growth they do not understand”.

“Something has to change, because we cannot do density without community support,” she added. Policymakers must explain the challenges of city planning to residents properly, but an easy way to secure community goodwill is to preserve green spaces, said Sharpe.

“It’s not just good for the environment, but will also go a long way to improving community trust and buy-in,” she added.

Michael Rose, chairman, Committee for Sydney, added that there is more to density than simply increasing the number of homes available.

“It is essential for the discussion about urban density to go beyond a debate between apartment towers and houses,” said Rose. Instead, he noted that there are five key characteristics that underpin successful densification.

These are: streets designed for pedestrians rather than cars; effective linkages to mass transit; a mixture of public activities suited for different ages and economic classes; a good mixture of residential, commercial, and recreational activities; and an aesthetic that is a balance of uniform building structures but aesthetically varied designs.

Cities that manage density well will enrich the lives of people who live and work there.

5. The focus on healthy buildings

The building sector has focused on improving its environmental credentials for some years now, but the next big opportunity for the sector is making buildings healthier, said Rick Fedrizzi, chairman and chief executive officer of the International WELL Building Institute (IWBI).

Dubbing health and wellness “the next trillion dollar opportunity”, Fedrizzi shared that companies lose billions of dollars every year to employee disengagement, unproductiveness, and illness. Through features such as lighting, ventilation and insulation, buildings can have a significant impact on employee health and performance, he added.

To help achieve this, IWBI has developed a certification standard, known as the WELL Standard, which assesses how buildings affect health and well-being. For example, it rewards buildings that allow users that sleep better at night by choosing the right lighting, discourage sedentary behaviour among occupants, and reduce indoor air pollution.

Some 351 buildings in 28 countries have been certified under the standard, with a further 1,035 starting to align themselves with the certification criteria through a mechanism called Adherence Paths.

IWBI has partnered with the Green Building Council of Australia (GBCA) for the past year to accelerate the adoption of the WELL standard in Australia.

6. The fight for food

The United Nations predicts that the world will need to increase its food production by 70 per cent by 2050 to feed a population expected to rise from 7 billion today to 9 billion. But even now, agricultural practices are not sustainable, driving habitat destruction, deforestation, and biodiversity loss worldwide.

Feeding a growing global population which will increasingly be concentrated in urban areas will no doubt be challenging. But Digby Hall, architect and director at Sydney-based Weaver Studio, noted that cities have the potential to be “powerhouses of food production”. 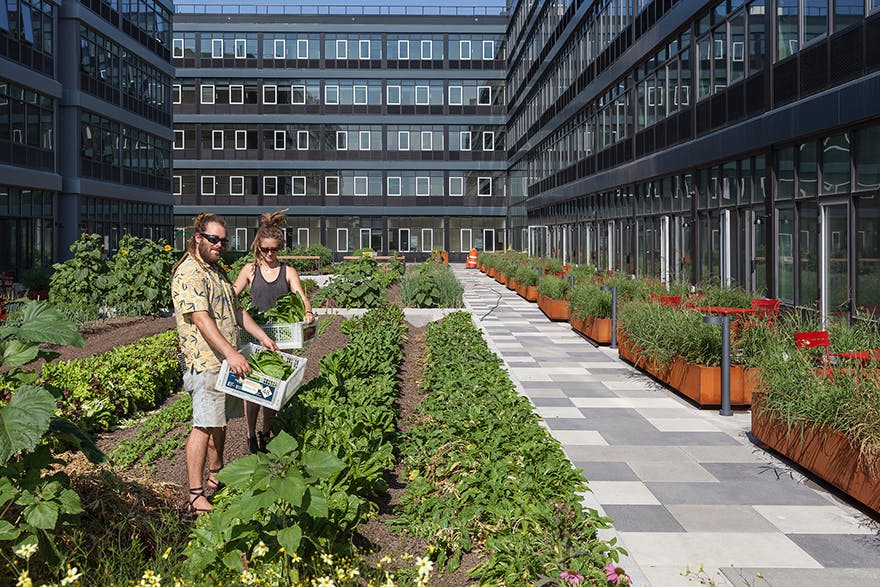 The Urby residential complex in New York City, which houses an urban food garden that supplies vegetables to residents as well as three restaurants in the neighbourhood. Image: Urby.

There are many forms that food production in cities can take, said Hall. These range from food farms in residential complexes or unused carpark lots to more technologically advanced solutions such as aquaculture—systems where fish and plants are grown in the same space—vertical gardens, and even robots that can automatically plant, water, and weed farming plots in urban gardens.

Many of these solutions already exist, but much more can be achieved if these tools are combined with one another, said Hall.

To enable this, food farming needs to occupy a much higher position on the list of priorities for architects and developers, said Hall.

“The vegetation or landscape aspects of the project are the first to get cut from a proposal if the budget is tight,” he noted. “We need an attitude shift where food production is regarded part of our critical infrastructure, just like roads and cars are.”

He added: “The question is, how do we reimagine our policy and design approaches to make this happen?”