The Singapore government is investing $100 million into research on how to make buildings and data centres here more energy efficient.

The money will be used to establish research hubs for building energy efficiency and green data centres, managed by the Building and Construction Authority and the Infocomm Development Authority respectively.

This initiative was announced by Yong Ying-I, permanent secretary for national research and development, at the Energy TechRoadmap Symposium held at the Suntec City Convention Centre on Wednesday. About 700 guests attended the event.

The plans were developed as part of the government’s Energy National Innovation Challenge set up in 2011 to identify energy solutions that were cost-competitive and could be implemented within 20 years.

Yong noted that these roadmaps were “one of the critical tools in [Singapore’s] strategy to understand global technological trends and inform the research and development priorities for Singapore to develop the energy solutions we need for tomorrow”.

Michael Quah, professor at the National University of Singapore and one of the main contributors to the roadmap noted that CCS/U was unique in its focus on ways to mitigate the carbon that had already been emitted, while the rest of the roadmaps focused on preventing emissions.

The roadmap identified a broad range of carbon capture utilisation options, including carbonating drinks in the food and beverage sector, manufacturing industrial chemicals such as formic acid and urea, and making construction materials such as polycarbonates and silica sand.

Experts noted that more research and development was needed to make this an economically viable and energy efficient strategy to adopt at a large scale.

In addition to these five roadmaps, Yong also announced that that there were two more in the pipeline for electric vehicles and solid waste management.

“The roadmaps will help all stakeholders evaluate their business options and direct their investments, sharpen their R&D strategies, as well as develop policy levers to facilitate quicker translate of these technologies into deployable solutions,” she added.

The roadmaps will help all stakeholders evaluate their business options and direct their investments, sharpen their R&D strategies, as well as develop policy levers to facilitate quicker translate of these technologies into deployable solutions

While Singapore has shown a strong commitment to reduce the city state’s greenhouse gas emissions, the International Energy Agency (IEA) shared in a keynote address that the global community was severely lagging behind on energy reduction targets.

Cecilia Tam, head of the IEA’s energy demand technology unit, said that some  technological solutions had been identified by IEA to reduce enough greenhouse gas emissions to prevent global temperatures from rising more than 2°C beyond pre-industrial levels by 2050. This is the limit recommended by the Intergovernmental Panel on Climate Change (IPCC) to avoid dangerous impacts of climate change on humans.

However, out of 12 identified technologies, only one – renewable power – was being adopted and implemented at a scale and pace that was required to stay below the 2°C limit. 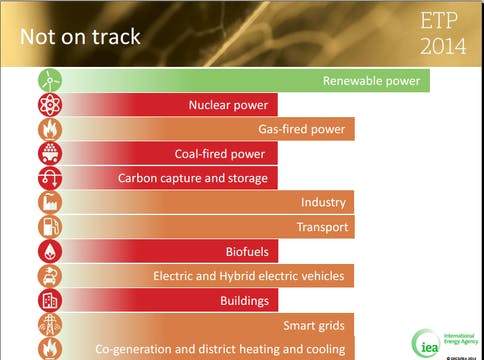 Tam shared said that among the areas that had yet to catch up, energy efficiency in industry and transport, along with smart grids, were the most promising.

“Different technologies struggle for different reasons in terms of reaching the levels we need to be at to meet the 2°C limit,” she told Eco-Business.

“One of the best ways to get these back on track is to have clear policy commitments from countries to address this serious climate change problem,” she added.