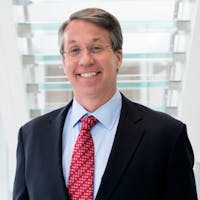 Tom Dillon is a vice president overseeing The Pew Charitable Trusts’ international environment portfolio, which includes advancing conservation and ocean governance around the world. Dillon’s ocean work at Pew includes efforts to establish marine reserves, end illegal fishing, ensure sustainable fisheries, and encourage governments to put policies in place that protect, maintain, and restore the health of marine ecosystems. He also works to conserve large landscapes such as the Australian Outback and the Chilean Patagonia. Before joining Pew, Dillon served as senior vice president at World Wildlife Fund (WWF) for 10 years. At WWF, he directed land and marine programs in the United States and in Asia, Africa, and Latin America. During that time, he led the organization’s largest-ever initiative that established and funded in perpetuity a 150 million-acre system of protected areas in the Brazilian Amazon. While living in Asia, he was a leader in creating WWF’s Mekong program, which is focused on conservation efforts in Cambodia, Laos, Myanmar, Thailand, and Vietnam. Dillon has also worked at the National Parks Conservation Association, Rails-to-Trails Conservancy, The Wilderness Society, and as a ranger in the Mount Hood National Forest. Dillon holds a bachelor’s degree in literature from Lehigh University and a master’s degree in environment studies from Yale University.

The unswerving case for a blue economy

The unswerving case for a blue economy