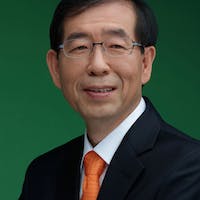 Park Won-soon is Mayor of Seoul since October 2011.

He's also President of ICLEI - Local Governments for Sustainability since 2015 and a board member of the Global Covenant of Mayors for Climate & Energy.

Before taking office as Mayor of Seoul, Park Won-soon worked as a human rights lawyer and was at the very center of the democracy and human rights movement in Korea.

As the Mayor of a global city, he's a strong proponent of going beyond national borders and strengthening city-to-city cooperation when striving to tackle the many different challenges that the world as a whole faces together.

The view from Seoul: Moving from climate goals to climate action

The view from Seoul: Moving from climate goals to climate action