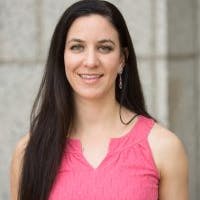 Deborah Lapidus is Mighty’s Campaigns Director, with a significant focus on the palm oil industry in Indonesia and Malaysia. Her campaigns for the environment and public health have engaged tens of thousands of people, representing a wide range of constituencies.

Prior to her work with Mighty, Deborah was the Outreach Director at Climate Advisers where she directed the Forest Heroes campaign, a successful international initiative that persuaded some of the world’s largest consumer and agricultural companies to eliminate deforestation from their supply chains, including Kellogg, Dunkin’ Donuts, Krispy Kreme, suppliers representing the overwhelming major of palm oil trade and some of the largest palm oil producers in Indonesia. Deborah founded the Flying Clean campaign to compel governments, airlines, and frequent flyers to take real action to reduce aviation pollution. She also mobilized a coalition of over thirty A-list musicians and the forest products industry to stop a congressional attack on the US Lacey Act, a law that prohibits the import of illegally logged wood.