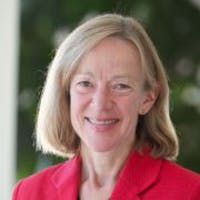 A chemist by background, Dr. Goodwin spent her early career at ICI but she began to move towards the environmental sector at Zeneca and subsequently Syngenta. Realising the vital role that care for the environment was likely to have in the future, she joined the Waste and Resources Action Programme (WRAP) as its first Director of Manufacturing and subsequently added the role of Director of Construction.

In 2007 she took on the role of CEO at WRAP which she held until June 2016. During her period of leadership, UK recycling rates increased from 9% to 43%, food waste was reduced by 21% in 4 years, and ground-breaking collaborative agreements and schemes such as the Courtauld Initiative, Halving Waste to Landfill by the construction sector and Love Food Hate Waste campaigns were born and flourished.

Dr. Goodwin is also a Champion of the UN Sustainable Development Goal 12.3 whose aim is to halve food waste around the globe by 2030. Her role at WRI is to help drive the various initiatives that are required around the world to achieve this goal.

Dr. Goodwin is a Trustee of the Building Research Establishment where she is also chair of the Research Committee.

In 2015 Dr. Goodwin was awarded and OBE in the Queen’s Birthday Honours List for services to the Business Resource Efficiency and the Environment.

Covid-19 has sparked a food loss crisis. Here are 3 ways to tackle it

Covid-19 has sparked a food loss crisis. Here are 3 ways to tackle it

We’ve woken up to plastic waste. Is food waste next?

We’ve woken up to plastic waste. Is food waste next?

We have a collective responsibility to halve food loss and waste

We have a collective responsibility to halve food loss and waste

Can we really cut food waste in half?

Can we really cut food waste in half?