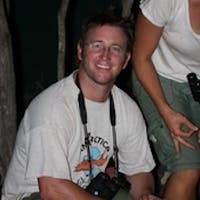 The University of Queensland

James is the co-chair of the IUCN SSC Climate Change Taskforce and has recently been elected the global president-elect of the Society for Conservation Biology. He is a Honorary Associate Professor in the School of Biological Sciences at the University of Queensland.

He is currently Director of the Climate Change program for the Wildlife Conservation Society, based in New York. James oversees WCS efforts on climate change adaptation and mitigation. The climate adaptation team provides technical expertise and helps incorporate anticipated impacts of climate change into the planning and implementation of conservation projects throughout WCS’s landscapes, seascapes, and species conservation programs. The climate mitigation team overseas diverse portfolio of REDD+ demonstration projects around the world and works to ensure that these inform the design of REDD+ systems through UNFCCC negotiations, national REDD+ readiness processes, and voluntary certification standard.

They work throughout WCS’s landscape, seascape, and species conservation programs in Africa, South America, Oceania, Asia and North America. The team also works with governments, multilateral institutions and private landholders to help promote the conservation of natural ecosystems as a cost-effective and practical means of addressing the impacts of climate change on humans and wildlife.

James began working with UQ as a postdoctoral fellow. In this role he worked closely with different government agencies and environmental NGOs to prioritise conservation investment in different countries. James appointment as an Honorary Associate Professor at UQ in 2011 has allowed this research to continue and expand with his role at WCS.