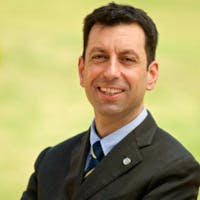 Kaveh Zahedi is the Regional Director and Representative for the United Nations Environment Programme in Asia and the Pacific. In this role he directs the implementation of UNEP’s projects in Asia Pacific, manages the staff of the office and is responsible for UNEP’s engagement with national environmental authorities, regional political forums and partners.

In addition to his role as Deputy, he set up and headed the Secretariat of the Climate and Clean Air Coalition (CCAC) for reducing short lived climate pollutant - a major initiative to help countries protect human health and the environment and slow the rate of near term climate change.

Prior to becoming Deputy Director, Mr. Zahedi was the UNEP Climate Change Coordinator responsible for UNEPs climate programme and work with the UNFCCC, during which time he helped set up major partnerships such as the UN-REDD Programme with UNDP and FAO.

Mr. Zahedi was also the Acting Director of the UNEP World Conservation Monitoring Centre from 2004-2007. He worked at UNEP headquarters in Kenya from 1995-1999 and the Regional Office for Latin America and the Caribbean in Mexico from 1999-2004.

Before joining UNEP, he worked at a non-governmental organization in the UK as project manager overseeing micro credit and related development projects.