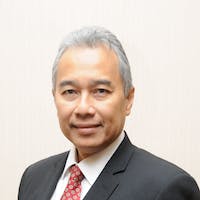 Agus Purnomo joined GAR in October 2014. He heads the Sustainability Department and he is responsible for planning GAR’s sustainability strategy and implementing the company’s sustainability commitments throughout the entire value chain. His role also includes communicating and engaging with strategic stakeholders. Prior to joining GAR, he held many positions in the government, multilateral institutions and international and national NGOs. These included Special Assistant to the President of Indonesia for Climate Change (2010-2014), Special Assistant to the Minister of Environment (2004-2009), the World Bank (2002-2004) and Executive Director of WWF Indonesia. He has also worked in many other national organizations involved in sustainable development issues. Agus graduated with a Master’s Degree in Environmental Conservation Policy from Tufts University in the US in 1994 and a Master’s in Business Administration from Prasetya Mulya Management Institute in Indonesia in 1985.

A quiet traceable revolution in the palm oil industry

A quiet traceable revolution in the palm oil industry