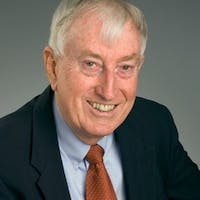 Professor Peter Doherty shared the Nobel Prize in Physiology or Medicine in 1996 with Swiss colleague Rolf Zinkernagel, for their discovery of how the immune system recognises virus-infected cells. He was Australian of the Year in 1997, and has since been commuting between St Jude Children’s Research Hospital in Memphis and the Department of Microbiology and Immunology at the University of Melbourne. His research is mainly in the area of defence against viruses. He regularly devotes time to delivering public lectures, writing articles for newspapers and magazines and participating in radio discussions.

Peter is also the author of several books, including A Light History of Hot Air and The Beginners Guide to Winning the Nobel Prize.