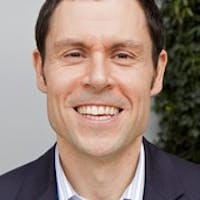 Elwyn Grainger-Jones has more than 20 years’ experience and expertise in development, agriculture and climate change, having previously held positions at the UK’s Department for International Development (DFID), the International Fund for Agricultural Development (IFAD) and
the World Bank. An economist by training, he played a leading role in establishing the World Bank’s Climate Investment Funds and IFAD’s Adaptation for Smallholder Agriculture Program.