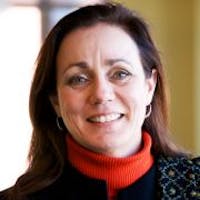 Drs. Kitty van der Heijden is the Director of WRI’s Europe and Africa Offices. She brings a distinguished diplomatic career with notable accomplishments in sustainable development and humanitarian aid to the global research organization.

Kitty represents WRI’s vision and strategy in Europe, and is responsible for managing WRI’s liaison office, based in The Hague, where she facilitates engagement with European governments, businesses, and institutions. She works in close collaboration with WRI’s President and Executive Team, its Program and Center Directors, and its Country Directors in India, Brazil and China. Kitty leads WRI’s engagement in the post 2015 Development Agenda, and also embraces work on the international climate regime; the role of the private sector in development; global indicators on resource productivity and efficiency; and inequality.

An economist by training (Erasmus University Rotterdam), with hands-on experience in sustainable development, her career has been guided by a motivation to ensure dignified living conditions for all of human society within planetary boundaries. Prior to joining WRI, Kitty was the Ambassador for Sustainable Development and Director of the Department for Climate, Energy, Environment and Water in the Ministry of Foreign Affairs of the Netherlands. She was responsible for policy development on environmental global public goods and managing the sizeable aid budget of the Department.

She led the Netherlands delegation to the Rio+20 summit and was appointed the Netherlands representative on the Open Working Group on Sustainable Development Goals. Prior to her secondment to the UN in Hanoi, Vietnam, where she managed the ‘One UN’ pilot to enhance effectiveness, efficiency and coherence of UN field operations. Kitty also represented her government in a multitude of UN fora in New York.

In 2013, she was elected the 3rd best civil servant of the Netherlands, and was awarded a national Ribbon of Honor for her efforts to raise public awareness on the challenges and opportunities of a truly sustainable development pathway. In 2014, she was elected as “Influencer of the Year” among civil servants, and listed as 20th in the top 100 most influential people in the Netherlands dealing with sustainability.

Kitty’s passion for – and knowledge of - sustainable development is exemplified in her presentation at TEDxHaarlem, entitled "Sustainable Development: What, Where and by Whom?".

Kitty enjoys her work, her family, and cooking (not necessarily in that order). She has been with her partner Bengt for almost a quarter of a century, and their two children Magnus and Elin adore nature as much as they do.