Could climate campaigners’ focus on current events be counterproductive?

This graph is from “Climate Risks: Linking Narratives to Action,” an important new essay in the Stanford Social Innovation Review on the gap between major environmental groups’ messaging on human-driven global warming and the focus of their programs and spending. The message these days has become all about extreme events, from the Frankenstorm to intense droughts, but the programs remain locked mainly on strategies for curbing the flow of greenhouse gases, according to the authors, Amy Luers, Carl Pope and David Kroodsma. Please read the piece. 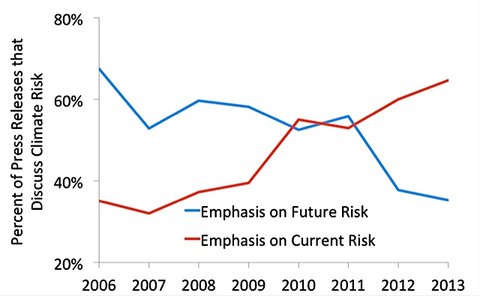 An analysis of news releases on climate change from large environmental groups finds a big shift in focus. Details here.

My main concern in viewing the graph is different.

To me, it conveys how environmental campaigners, in trying to engage a public for which global warming has little salience, may be helping sustain the still-common view that greenhouse-driven warming remains uncertain science.

My reasoning? According to the latest science, in most cases (outside of extreme heat waves) the connections between today’s extreme weather events and human-driven climate change range from weak (hurricanes) to nil (tornadoes) — and the dominant driver of losses in such events is fast-paced development or settlement in places with fundamental climatic or coastal vulnerability.

So “here and now” arguments take the policy fight on global warming into the terrain favored by those who recoil at environmental regulation or profit from fossil fuels — an arena where there’s lots of real scientific uncertainty. All they have to do is sprinkle just a little of that uncertainty dust and the public disengages. Job done.

The reality is that efforts to attribute shifts in patterns of extreme weather to the greenhouse effect remain dogged by enormous uncertainty. Here’s a fresh example: Recent much-discussed studies reporting a link between weird storm patterns and Arctic sea-ice retreats are now facing some hefty pushback.

The merits and drawbacks of real-time and long-term arguments for addressing climate change were discussed at this year’s Climate, Mind and Behavior symposium at the Garrison Institute.

Daniel Schrag, a prominent climate scientist at Harvard and member of President Obama’s committee of science and technology advisers, gave a talk making the case for climate action based on the extraordinarily clear and sobering body of science pointing to a profoundly transformed planet in coming centuries. Please watch his talk here.

I then moderated a conversation on climate choices with Schrag and Elke Weber, a Columbia University behavioral scientist focused on climate, in which we explored how to mesh the need to address today’s climate risks with the reality that reducing greenhouse gas emissions is a multi-generational challenge.

The bias toward the here and now in the climate debate came up, and I made this point:

The discourse and the media focus on the here and now…almost feels like rope-a-dope, like [how] Muhammad Ali would love his opponent to come in the ring and have a big battle to wear them out. All the discussions to me about attribution of recent events, given the complexities of natural variability, make it like rope-a-dope boxing, when the real firm solid noncontroversial low error-bars picture is of this profound transformation of the planet.

I encourage you to watch the resulting discussion here and weigh in: