Why a climate-friendly lifestyle could save your life

Speaking in a recent webinar in the lead-up to this year’s United Nations climate conference—widely known as COP 23—Campbell-Lendrum said: “People’s lives are affected by extreme weather events. People are also killed by these events.”

“These also facilitate transmission of water-borne diseases, cause problems that we are not necessarily expecting, such as the chemical contamination which was associated with the floods in Houston,” he added, referring to the floods caused by Hurricane Harvey in August this year.

Campbell-Lendrum expressed confidence that this year’s  COP 23, which will be held from 6 to 17 November in Bonn, Germany, will put the health impacts of climate change on the front page of global negotiations.

Stop pretending that we can burn fossil fuels without paying the price.

“WHO estimates that by the year 2030 we would be conservatively increasing death counts by quarter a million of people a year due to the impacts of our own actions on the global climate,” warned Campbell-Lendrum.

He cited an increase in cases of malaria, cholera, diarrhoeal disease and undernutrition due to climate change. Sea level rise for those living in the Pacific and the Caribbean is also a concern, not just as houses are flooded but also because sea water can inundate water sources and render them undrinkable, he said.

Spurred by the magnitude of the health risks associated with climate change, the WHO is now ramping up its efforts to protect people’s health from climate impacts, Campbell-Lendrum said.

Central to these efforts is the call to reduce greenhouse gas emissions.

“The things that we need to do to reduce greenhouse gas emissions are actually a massive public health opportunity,” he said. 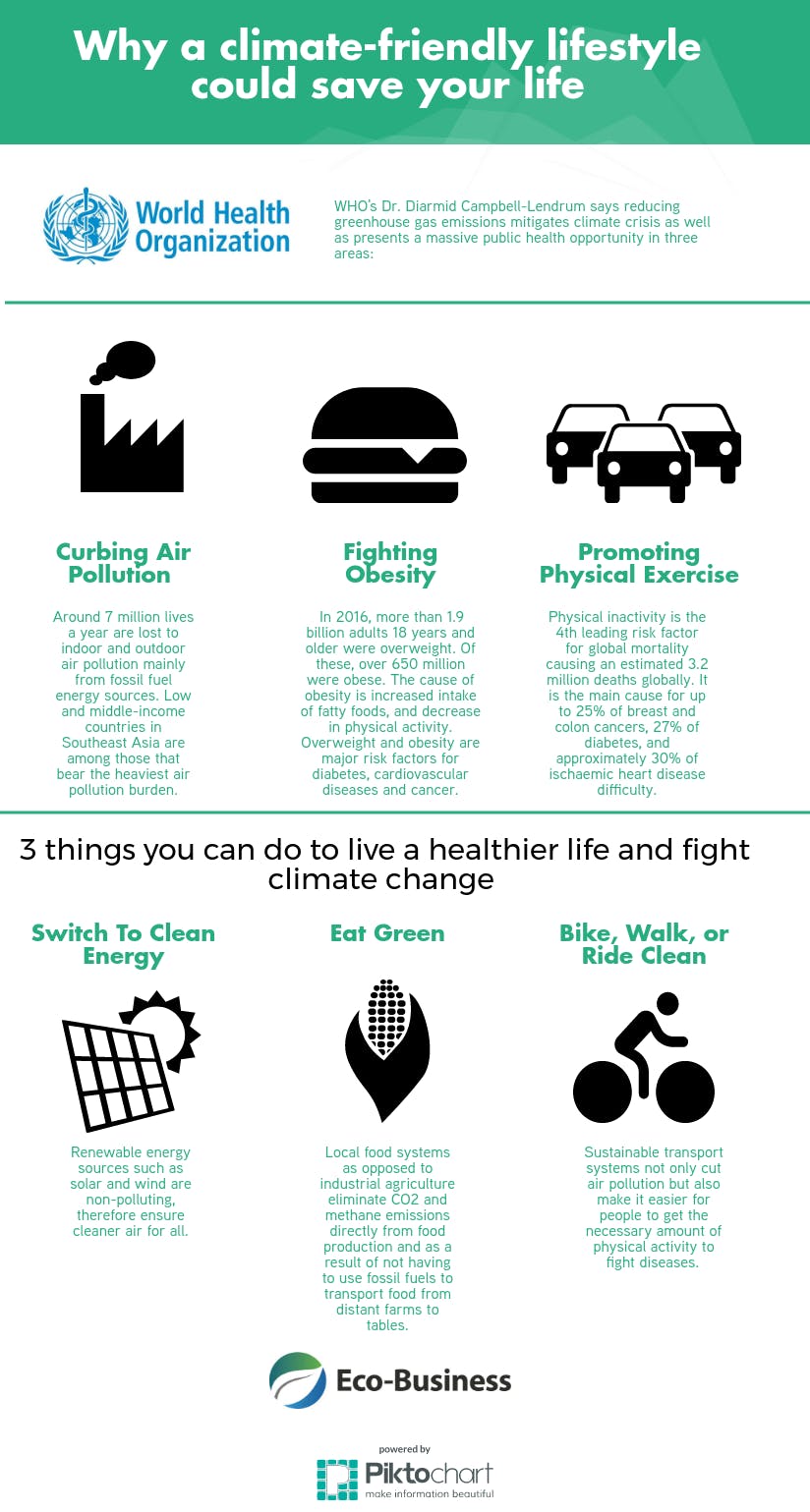 First, it would lead to fewer deaths by air pollution. Aside from the health impacts of extreme weather events, around 7 million lives are lost every year to indoor and outdoor air pollution from polluting energy sources according to the WHO.

According to a report by the Intergovernmental Panel on Climate Change (IPCC), industrial agriculture contributes to over 20 per cent of global greenhouse gas emissions.

In contrast, local food systems, especially those that employ organic agricultural practices and where food does not need to be transported over long distances to reach tables, can help mitigate climate change while also reducing overconsumption.

Third, Campbell-Lendrum said that more sustainable transport systems such as efficient public transport, cycling and pedestrianisation not only cut air pollution but also make it easier for people to get the necessary amount of physical activity to live healthy lives.

Campbell-Lendrum said the WHO expects that at this year’s COP, countries will not backslide from their commitments to reduce reliance on fossil fuels and curb greenhouse gas emissions.

“Stop pretending that we can burn fossil fuels without paying the price,” he said.

Local and national governments must present better evidence that points to how burning fossil fuels is polluting the planet and endangering people’s health, he added.

“Suddenly it’s clear that all of the sustainable development choices are the right ones to take. That is the change we should be aiming for,” Campbell-Lendrum said.