Who's responsible for deforestation? New Forest 500 bares all

A new ranking by Global Canopy Programme paints a depressing picture of current efforts by those driving deforestation, but some good progress has been made, giving cause for optimism.

UK think tank Global Canopy Programme (GCP) has launched a first-of-its-kind platform that evaluates and ranks 500 organisations around the world which are responsible for the commodities that drive deforestation.

The study has uncovered a “depressing” picture of deforestation: Only seven companies scored top marks in implementing policies to protect forests and most governments are lagging behind, suggesting that the current global goal of halving forest loss by 2020 may just remain a pipe dream.

The Forest 500 ranking is based on a study of 250 companies - with total annual revenue in excess of US$4.5 trillion – 150 investors and lenders, 50 countries and regions, and 50 other organisations.

More than US$100 billion of these goods are traded every year and they are found in more than half of packaged products on supermarkets’ shelves today.

“Overall we found a pretty depressing picture across all sectors, with some of those assessed, including all the hedge funds and sovereign wealth funds analysed, having no forest policies in place, despite their crucial influence over the future of our tropical forests,” GCP said.

This is despite the ambitious New York Declaration on Forests signed by government leaders, major multinationals, indigenous communities and civil society in September last year to halve deforestation – including by eliminating it from the production of agricultural commodities – by 2020.

This follows a 2010 pledge by the Consumer Goods Forum (CGF), a global alliance of 400 companies with combined sales of US$3 trillion, to achieve net zero deforestation in their supply chains by 2020.

Other commitments have been made by the financial community, most notably through the Banking Environment Initiative, a consortium of 10 financial institutions that hopes to lead the way in directing capital towards environmentally and socially sustainable economic development.

The GCP’s Forest 500 ranking aims not only to provide “precise information” to measure the progress of these goals, it also wants to encourage organisations and countries to do more to protect the world’s woodlands because everyone is part of “a global deforestation economy”, Mario Rautner, the GCP’s Drivers of Deforestation Programme Manager, told Eco-Business.

“Deforestation is in our chocolate and our toothpaste, our animal feed and our textbooks, our buildings and our furniture, our investments and our pensions…. Together, these 500 countries, companies and investors have the power to clean up global supply chains and virtually put an end to tropical deforestation,” he added.

Top marks for these boys…

This largely mirrors the finding that the best scoring companies are based in the UK, Switzerland and Germany, followed by the USA and France. Companies were analysed using indicators in four categories: overall forest policy; commodity policies; operations; and reporting and transparency. 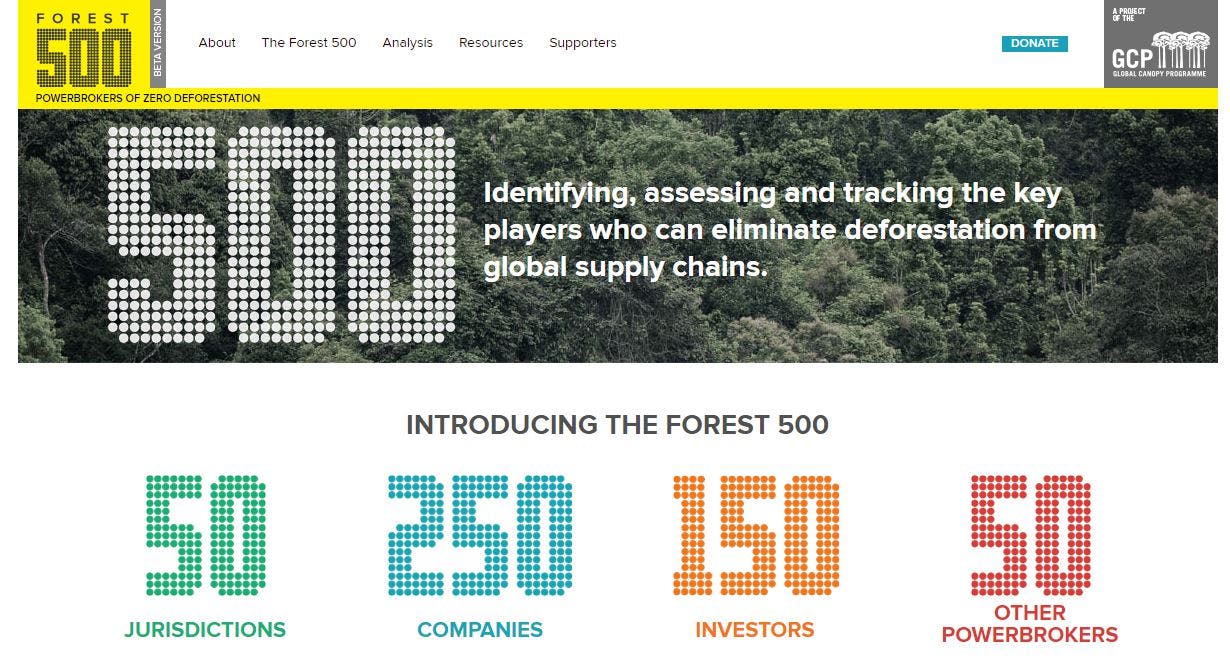 Meanwhile, companies listed on stock exchanges scored more than 50 per cent higher than privately-owned companies and those with other governance structures, the study also found.

This suggests that sounder policies usually result from scrutiny that comes with public reporting requirements and responsibility towards bigger groups of shareholders, including financial regulators.

State-owned companies are found to be performing particularly badly.

Deforestation is in our chocolate and our toothpaste, our animal feed and our textbooks, our buildings and our furniture, our investments and our pensions…. Together, these 500 countries, companies and investors have the power to clean up global supply chains and virtually put an end to tropical deforestation.

Countries also received a range of scores, with Latin American nations including Colombia, Brazil and Peru ranking the highest due to their policies to tackle deforestation and governance. The Netherlands and Germany came out top amongst countries that import forest risk commodities. Germany is Europe’s fourth largest importer of forest risk commodities and plays a big role in the palm oil, beef and timber trades.

“The most developed forest policies in commodity importing countries, such as those in the Netherlands and Germany, tend to be commodity specific and industry led, rather than government-initiated,” the GCP said.

… And the bad guys are in Asia, the Middle East

This means that key state buyers such as China, which is responsible for importing over 22 per cent of the value of all forest risk commodities, and India, a key importer and consumer of palm oil, achieved low scores.

Other countries that rated poorly include Madagascar, in part due to its high forest loss between 2000 and 2012, and Nigeria, for its relatively low forest policy and governance scores.

This points to a worrying fact - governments are simply not doing enough.

Companies on the whole don’t fare much better; only one fifth of the 50 CGF members assessed in the Forest 500 study have zero or net zero deforestation policies.

Asian CGF companies in particular are shown to be inhibiting progress and need to engage urgently in developing effective policies, the GCP said.

Overall, the worst national and corporate performers are Asian and Middle Eastern ones, out of which 30 of them scored zero points.

105 out of 250 companies in the ranking are Asian, Rautner said, adding that a small group of the companies based in Indonesia, Malaysia and Singapore producing palm oil scored “quite well”.

“It is important to recognise that many more companies included in the Forest 500 operate in Asia than are headquartered there,” Rautner said. “This includes some of largest consumer goods focused companies globally that scored amongst the highest within the Forest 500.”

“This means that the policies of these companies also apply to their operations within Asia,” he added.

Despite all the bad news that came out of the study, the GCP believes that the right steps are being taken by the biggest players across sectors.

Next steps are the right steps

“Though the Forest 500 findings highlight that much work needs to be done, the good news is that a number of big players across sectors are demonstrating the leadership that is needed,” Rautner said.

“Putting policies in place is just the necessary first step in addressing tropical deforestation and their implementation will be critical in order to transition to deforestation free supply chains by 2020.”