Although the Philippines ranks highest among its Southeast Asian counterparts in sustainable energy resources, it still relies heavily on fossil fuels.

A study that may surprise some energy industry observers has ranked the Philippines as the world’s most progressive renewable energy nation for the third year running.

The Philippines—which does not feature in the top 10 overall—ranked first in the environmental sustainability category. This is defined as the ability to supply, demand, and develop energy from renewable and other low-carbon sources.

The Philippines is the only Asian country to make it to the list, which is dominated by European countries. But even though the populous archipelago ranks highly for using sustainable energy resources among its regional counterparts,it remains heaviliy reliant on fossil fuels.

“The Philippines is number one in Southeast Asia in sourcing its power from renewable energy, with a share of 24.2 per cent in gross generation and 32.5 per cent in installed capacity. However, almost 76 per cent of our power generation was still supplied by fossil fuel plants,” commented Pedro Maniego, Jr. senior policy advisor of the Institute for
Climate and Sustainable Cities. 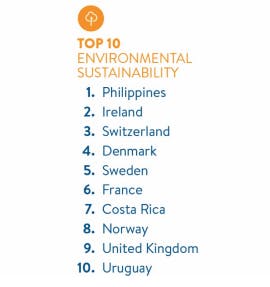 Meanwhile, the local power infrastructure sector is projected to be driven by investment in coal-fired power plants over the next 10 years, based on Fitch Group’s BMI Research in an August 2017 report.

Maniego, an energy law expert, told Eco-Business that the country can only transition to 100 per cent renewables if it uses energy sources that are naturally and locally found in the area.

“When the retail competition, open access and competitive selection mechanisms are fully and fairly implemented, and the costs of power storage eventually go down, the combined costs of renewable energy with storage would be lower than coal and natural gas,” he said.

High marks in just one category is not enough

The WEC report noted that the top 10 in environmental sustainability is dominated by states that are able to take advantage of their renewable energy potential such as Iceland, the Philippines and Costa Rica, which all have high geothermal or hydropower capacities.

However, the main challenge for these countries is to avoid over-reliance on one single or weather dependent energy resource at the expense of the other components of sustainable energy like energy security and energy equity, the WEC said.

The Philippines, for example, which top scored for environmental sustainability, only ranked 63rd for energy security or the effective management of primary energy supply from domestic and external sources.

The country also ranked a lowly 95th for energy equity, or the accessibility and affordability of energy supply across the population.

The council urged countries like the Philippines to decentralise its energy resources to improve energy access rates while at the same time improving the country’s energy equity performance.

“A well-managed integration of distributed energy resources (DER) and risks associated with the uptake of DER would at the same time reduce the risk of a drop in environmental sustainability,” the report stated.

Overall, the top ten was led by Denmark, followed by Sweden, Netherlands and the United Kingdom. New Zealand, the only non-European country in the list, placed ninth. 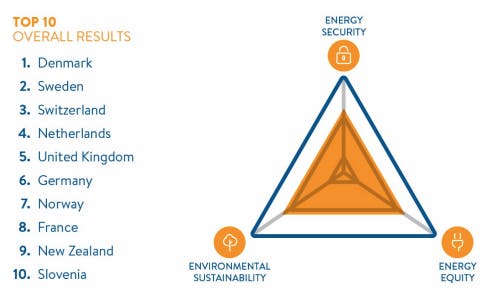