State of the climate: 2018 set to be fourth warmest year despite cooler start

While the Earth was cooler in the first half of 2018 over the same period for the three previous years, scientists detect, however, a quick and more dangerous switch to a warmer temperature.

This was due, in part, to a moderate La Niña event during late 2017 and the first half of 2018. However, the world is quickly switching to El Niño conditions, which should contribute to a somewhat warmer finish to the year.

Sea ice has been at record or near-record lows in the Arctic for much of the year, but has recovered slightly over the past two months.

Antarctic sea ice extent has generally been on the low-end of normal for the first half of 2018.

With the data now in for the first half of the year, Carbon Brief estimates that 2018 is most likely to be the fourth warmest on record for the Earth’s surface. Depending on what happens in the remaining six months, it could be as high as the second warmest in some temperature datasets, or as low as the sixth warmest in others.

Global surface temperatures have warmed about 1.1C since 1850—with 0.8C of that warming occurring since the 1970s. The best estimate provided by scientists is that almost all of this long-term warming is due to human emissions of greenhouse gases.

However, there is still a sizable amount of year-to-year variation on top of this warming trend. Short-term variations in the Earth’s climate are mainly associated with El Niño and La Niña events, fluctuations in temperature between the ocean and atmosphere in the tropical Pacific which help to make some years warmer and some cooler. (Large volcanic eruptions can also lead to a run of relatively cooler years, though there has been no eruption with a major climate impact since Mount Pinatubo in 1991.) 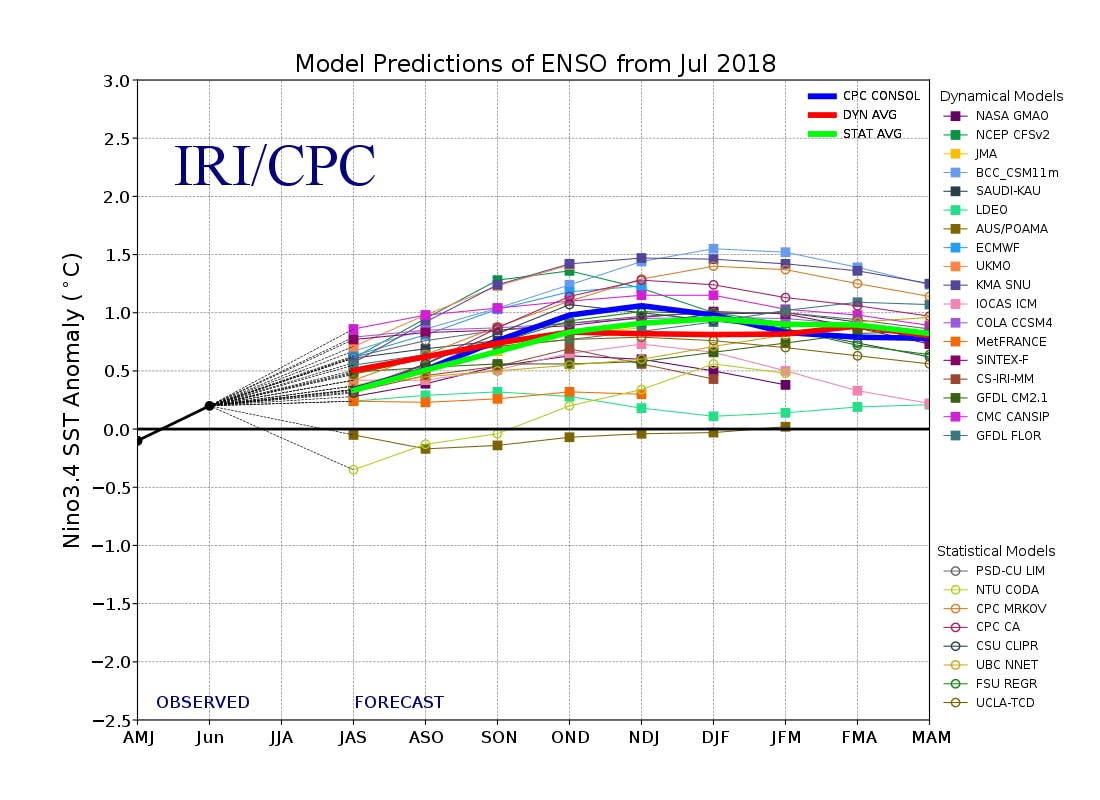 Ensemble of El Niño/La Niña (ENSO) forecast models as of July 2018 provided by the International Research Institute for Climate and Society (IRI) at Columbia University. Both physics-based dynamical models (squares) and statistical models (circles) are shown.

Global surface temperatures are reported by a number of different international groups of scientists, including NASA, NOAA, Met Office Hadley Centre/UEA, Berkeley Earth, and Cowtan and Way. Copernicus/ECMWF also produces a surface temperature estimate based on a combination of measurements and a weather model—an approach known as reanalysis.

Carbon Brief’s figure below compares the annual global surface temperatures from these different groups since 1970—or 1979 in the case of the Copernicus/ECMWF reanalysis. It shows the temperature for each year, as well as the 2018 to-date estimate—the January-June average—as coloured dots. Values are shown relative to the 1979-2016 average temperature for each record as a common baseline period.

All the surface temperature records from the different groups agree quite well on the warming experienced over the past 40 years. However, there are growing differences over the past three years between the groups. For example Berkeley Earth, NASA and Copernicus/ECMWF had 2017 as the second warmest year on record after 2016, while NOAA, Hadley/UEA and Cowtan and Way had 2017 as the third warmest after 2016 and 2015.

The differences in recent years are more easily seen in the monthly data. The figure below shows monthly data from each record between January 2012 and June 2018. The 2015-16 El Niño event stands out as particularly warm, with temperatures having fallen modestly to around 2015 levels in the months since.

Temperature records from the groups differ based on how much data from the Arctic and Antarctic that they include, as well as what sea surface temperature record they use. For example, in early 2018 records from NOAA and Hadley/UEA showed considerably cooler temperatures than other groups, as they did not fully account for unusually warm conditions in the Arctic. As the UK Met Office points out, when they are restricted to areas of common coverage, all of the records match up quite well.

The figure below shows the distribution of temperature anomalies—namely, differences from the 1979-2016 baseline period—in the Berkeley Earth record over the first six months of 2018. 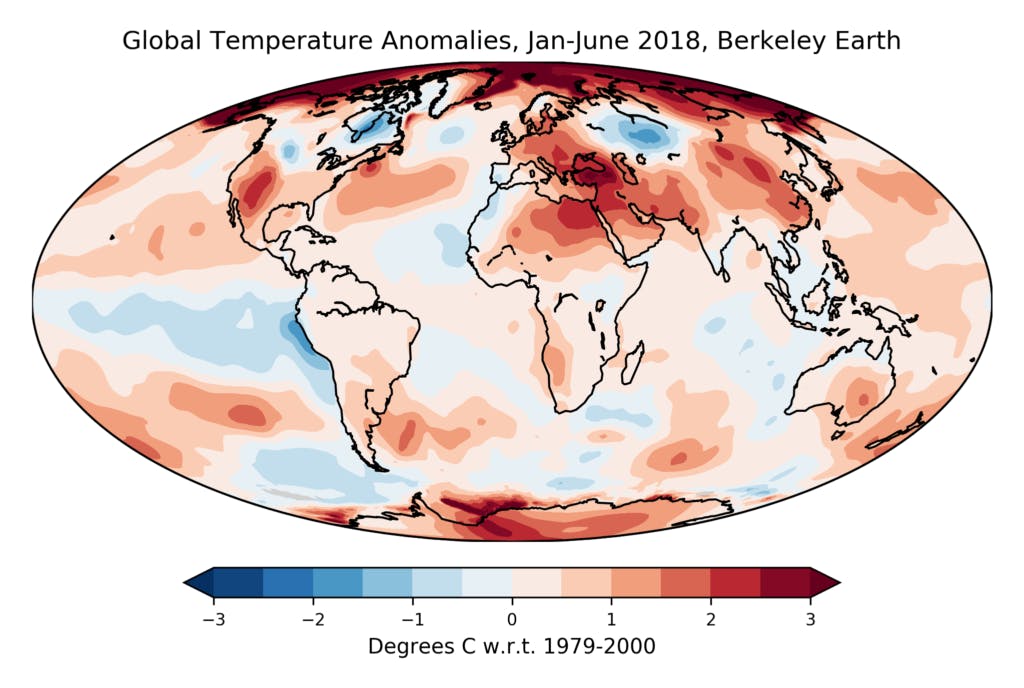 The Arctic has been strikingly warm so far this year, with many areas 3C warmer than the global average. Turkey has also experienced unusual warmth of about 2C above average. Southwestern US and northern Mexico have experienced temperatures about 1.5C above average. And there has been a noticeable La Niña pattern in Pacific off the coast of South America, with its characteristic cold “tongue” of water.

Conditions have been a bit different in June (and July), with much of the Arctic experiencing cooler temperatures. At the same time, there has been near-record warmthover many mid-latitude land areas. The figure below shows temperatures in June, also from Berkeley Earth. 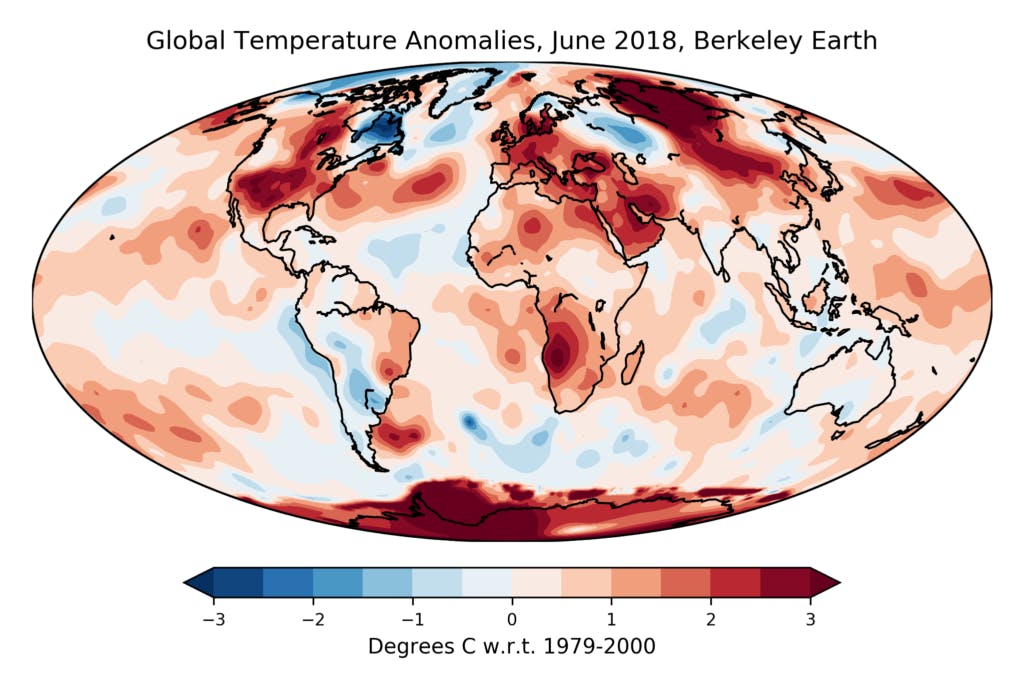 La Niña had mostly faded in the Pacific by June and land temperatures were at least 2C above normal over much of the US, UK, northern Europe, Middle East and Siberia. Much of Antarctica was also experiencing warmer-than-usual winter temperatures. The heatwaves experienced in June and July across Europe were made “up to five times more likely” by the human-caused warming experienced over the past century.

High temperatures and heatwaves in the northern hemisphere were also likely driven, in part, by unusual behaviour of the jet stream. A split jet stream pattern has led to stagnant high-pressure and low-pressure systems sticking around for longer than usual. These persistent northern-hemisphere weather patterns may be linked to the rapid Arctic warming experienced over the last few decades, though this is still an area of active research among scientists.

Land warming faster than the ocean

In recent decades the Earth’s land areas have been warming twice as fast as the oceans. The figure below shows the two different ocean records most commonly used in global temperature estimates—Hadley’s HadSST3 and NOAA’s ERSSTv5—as well as three different land-only records from Berkeley Earth, NOAA, and Hadley/UEA (CRUTEM4).

In contrast to the surface-based measurements used by the groups mentioned above, satellite-based temperature records from microwave sounding units (MSU) have also been providing estimates of changing temperatures since such instruments were first launched into orbit in 1979. They measure the temperature of a broad part of the lower atmosphere rather than the surface. On average, their lowest atmosphere measurements come from a region around 5km above the surface.

Two groups provide estimates of temperatures of the lower troposphere (TLT), the part of the atmosphere closest to the surface. The TLT records from Remote Sensing Systems (RSS) and the University of Alabama, Huntsville (UAH) are shown in the figure below.

While these measurements have similarities to surface temperatures, they are not measuring the same thing. The region of the atmosphere that they measure tends to be influenced more strongly by El Niño and La Niña events than the surface. Therefore, satellite records show correspondingly larger warming or cooling spikes during these events. This is why, for example, 1998 shows up as one of the warmest years in satellites, but not in surface records.

There are also much larger disagreements between the two satellite records than between different surface temperature records. These disagreements become particularly pronounced after the year 2000, with the RSS record showing a rate of warming similar to surface records, whereas UAH shows considerably slower warming. These differences are largely due to choices in how each group handles corrections for the “orbital decay” of satellites changing the time of day over which different parts of the world are measured.

Estimating where 2018 will fall

With half the year’s data recorded and forecasts of El Nino development over the next six months now published, it is possible to estimate with reasonable accuracy where 2018 annual temperatures will likely end up.

Carbon Brief has examined global temperature data from seven different climate centres around the world, both for the Earth’s surface and the lower troposphere. Temperatures for the full year of 2018 were estimated using the data available to-date for each dataset, along with a projection of the El Niño Index for the remainder of 2018.

The probability of where 2018 will fall on the leaderboard of warmest years based on 2018 temperatures so far this year is shown in the table below.

Satellite temperature records from UAH and RSS predict that 2018 will have a considerably lower rank, reflecting, in part, the larger impact of El Niño events on prior years in the satellite lower troposphere record. RSS and UAH both suggest that 2018 will most likely be the 6th warmest year on record for the lower troposphere, but could be as high as the 3rd (in RSS) or as low as the 10th (in UAH).

These show more uncertainty in their 2018 projections than the surface records, as there is a less clear historical relationship between the first six months of the year and the annual temperature in satellite records.

Despite the slightly lower temperatures in 2018 compared to the past three years, sea ice has been at record lows in the Arctic and quite low in the Antarctic for much of the year. The figure below shows both Arctic and Antarctic sea ice in 2018 (solid red and blue lines), the historical range in the record between 1979 and 2010 (shaded areas), and the record lows (dotted black line). Unlike global temperature records, sea ice data is collected and updated on a daily basis, allowing sea ice extent to be viewed through to the end of July.

For the first four months of 2018, Arctic sea ice extent set a new record low nearly every day. It recovered slightly in June and July, though in recent days has fallen back close to the record low for this time of year. It is still likely to be too early to tell how low the summer minimum in the Arctic will be, as the size of the summer low will also depend on Arctic weather during the next two months.

2018 has also seen record low amounts of “multiyear ice” in the Arctic—ice that has survived without melting for multiple years. In 2018, multiyear ice comprised just 34 per cent of sea ice, with only 2 per cent at least five years old. Back in the 1980s, upwards of 60 per cent of Arctic sea ice was multiyear ice.

Antarctic sea ice extent set new record lows for a brief period in February and has generally been on the low-end of normal for the first half of 2018.

The per cent likelihood of different year ranks for 2018 is estimated by using the output of the regression model, assuming a normal distribution of results. This allows us to estimate what per cent of possible 2018 annual values fall above and below the temperatures of prior years for each group.