More research is needed on ‘new’ pollutants such as microplastics and coffee, but what steps can manufacturers and consumers take to protect the marine environment in the meantime?

What is the impact of industrialisation and megacities on coastal seas? What amounts of contaminants such as microplastics, ultraviolet (UV) filters and coffee are ending up in these water bodies?

A group of researchers from Germany and China believes an ideal place to search for answers relevant to China, and the world, lies where the Pearl River meets the South China Sea.

Home to more than 60 million people residing in Guangzhou, Hong Kong and other cities, the Pearl River Delta is said to be the world’s largest urban area.

The researchers want to know how natural materials as well as harmful substances from human activity are distributed on coastal shelves and deeper parts of the ocean, and how far pollution from industrial centres and urban sprawls stretches into the sea.

On August 2, the team of 24 German and 16 Chinese scientists set off from Singapore on the German research vessel Sonne for a month-long expedition. They plan to collect samples of pollutants, naturally occurring substances and marine organisms at more than 70 locations off Hong Kong in the South China Sea. 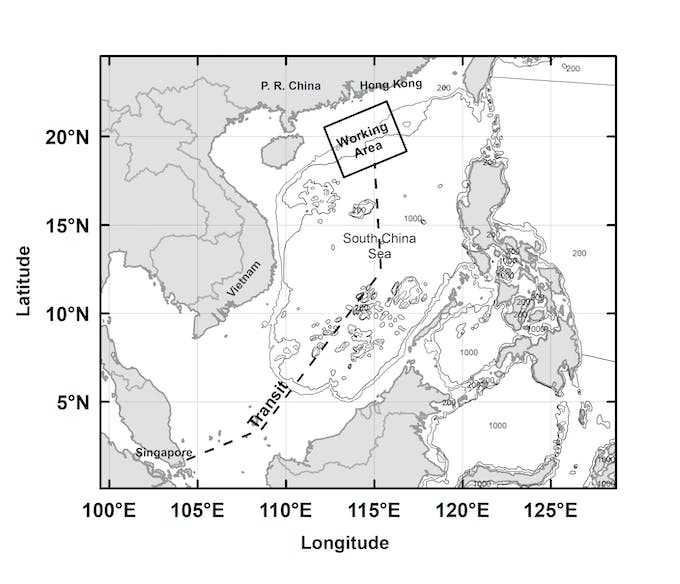 The team of 24 German and 16 Chinese scientists plan to collect samples at more than 70 locations off Hong Kong in the South China Sea. Image: IOW

Some pollutants such as DDT—which is used in pesticides—are well-known to researchers but others, such as microplastics, antibiotics and UV filters, are considered emerging pollutants because scientists have only recently developed techniques to measure them.

These substances are suitable markers for identifying and quantifying the path of man-made pollutants from source to sea, said expedition leader Joanna Waniek of the Leibniz Institute for Baltic Sea Research Warnemünde (IOW).

The trip will build on previous research cruises and data from Chinese partner institutions, allowing the researchers to trace the development of pollution in the region over a period of five years. It is part of a German-Chinese project called Megacity’s fingerprint in Chinese marginal seas: Investigation of pollutant fingerprints and dispersal (Megapol).

Microplastics come in various forms, said the IOW’s Dr Ralf Prien, an expert on ocean sensors. Some are the result of larger pieces of plastic breaking down, but others are actively added in products such as cosmetics and facial scrubs.

Antibiotics are used by humans and in aquaculture. When they are improperly disposed of and end up in rivers and oceans, they mix with bacteria, which may develop drug resistance, said Professor Waniek. This may ultimately hurt humans when they consume fish containing drug-resistant bacteria.

UV filters contain various chemicals that can bleach corals and damage the fertility and reproductive systems of marine life. The effect of coffee is unknown, although some scientists believe it that high levels of caffeine are harmful to marine organisms.

The problem is, sometimes you can measure the toxic impact of a single compound but what we have in the environment is a complex mixture, and this behaves completely differently.

Information is lacking on new contaminants and scientists are working on ways to measure them, but it’s no easy task. “The problem is, sometimes you can measure the toxic impact of a single compound but what we have in the environment is a complex mixture, and this behaves completely differently,” said Professor Detlef Schulz-Bull, IOW’s deputy director and head of its marine chemistry department. “And many studies say this mixture is more toxic than the… sum of concentration of individual compounds. So, there are some effects that we don’t understand very well at the moment.”

While research is ongoing, some measures can be taken to protect the marine environment, said Waniek.

Consumers should dispose of rubbish properly and sort their trash, she said. They should never flush unused antibiotics down the toilet, and should return them to pharmacies instead, she said.

Beach goers who have slathered on skincare products with UV filters should avoid going into the sea, or they should use marine-safe sunscreen, said Schulz-Bull.

Sewage plants should get rid of these contaminants before the waste water is discharged into rivers and seas, he added.

Ultimately, getting industry to change the way they manufacture products may be the “easier way”, said Waniek.

Asked if there is a lot more marine trash in the oceans now compared to the past, Waniek—who has been a researcher for 25 years—said it depends on the region.

Twenty years ago, there was almost no trash in the centre of the Atlantic Ocean, she said. “These days, we see a lot of plastic and Styrofoam floating but we also find that at depths, in seafloor sediments, which is really disturbing. And when we work in the Baltic, we find plastic rubbish when we recover our instruments,” she said. “It’s hard to say (there’s) more, but we are more aware of the problem and we pay more attention to it as well.”

From their 2015 research, the scientists found the concentration of contaminants in the South China Sea to be lower than the enclosed Baltic Sea because it is an open and deep sea that mixes with water from the surrounding ocean.

But just as the European Union and coastal states around the Baltic Sea adopted an action plan in 2007 to restore its marine environment by 2021, Schulz-Bull said greater international collaboration would probably be useful for Asian waters. This would enable the sharing of knowledge and formulation of a plan to work towards goals, he said.