An experiential art exhibit made from 18,000 plastic cups collected from Singapore's iconic hawker centres has opened as the government announced new measures to tackle plastic hyper-consumption.

If people were scared of plastic, maybe they wouldn’t use so much of it.

That’s the idea behind Plastikophobia, an art installation that launched on Thursday in Singapore that invites people to walk through a claustrophobic sculpture made entirely out of throwaway plastic cups.

Eighteen thousand single-use plastic drink cups were collected from Singapore’s famous hawker food centres to make the sculpture, a three and a half metre high tunnel of plastic lit up with LED lights.

The exhibit’s creators, Canadian duo Benjamin Von Wong and Laura François, want to get the word ‘Plastikophobia’—which means a fear or aversion to plastic—into the English dictionary, and jolt people into being aware of the waste generated by the country’s Unesco-nominated street food stalls.

We wanted people to actually walk through the amount [of waste produced by hawker centres]. 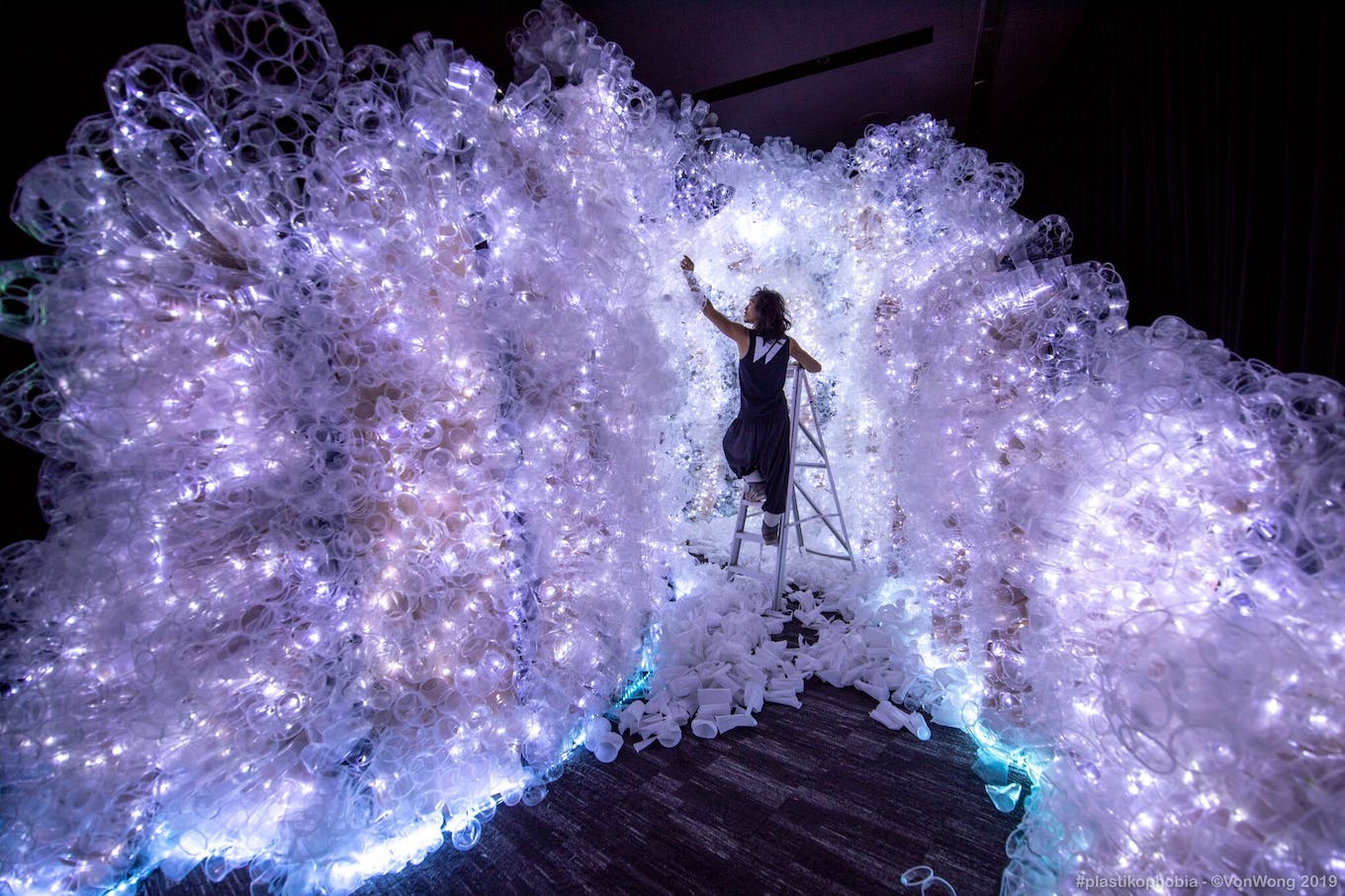 The cups were gathered by cleaning staff in 2 days in February from 22 hawker centres dotted all over the country.

The number of cups collected, 18,000, is “an extremely conservative estimate” of the amount of plastic waste hawkers produce every day, since the gathered cups were only those left out on tables by customers, François tells Eco-Business.

She estimates that the amount of cups collected is roughly half the total cup waste volume hawker centres produce in two days. The rest is either taken away by customers or thrown away.

“We wanted to get an idea of the number of plastic cups hawker centre owners were giving out, and how many of those cups never leave the hawker centre,” says François, co-producer of the project, and an expert in sustainable design and social impact strategy.

That number is the starting point for the sculpture. “We wanted people to actually walk through the amount [of hawker centre waste], to experience the number,” she says. 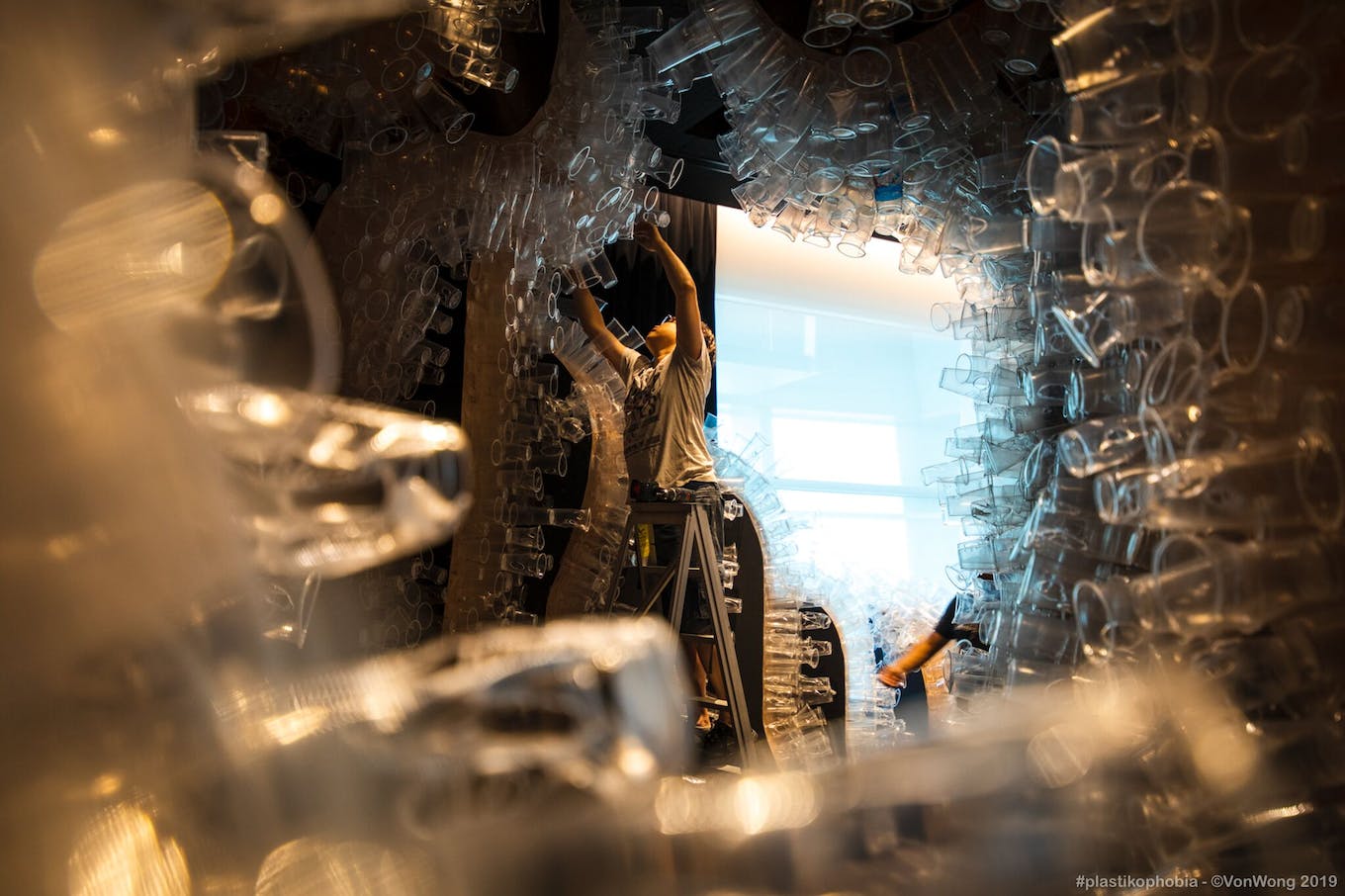 As just 22 hawker centres get through 18,000 plastic cups in two days, Singapore’s 144 hawker centres produce roughly 118,000 cups in that time. Assuming hawker centres are open every day of the year, that’s about 21.5 million cups wasted annually.

“When trying to communicate statistics, [experiential art] feels like the most effective way, says François. “We wanted to get the idea across that plastic should actually be something to fear.”

Using cups adds to the fear factor because of their circular rims, triggering in some people the feeling of trypophobia, the fear of circles, she explains.

In a video of the making of Plastikophobia, Von Wong said the project “extended the life of the cups from 6 minutes to 6 weeks,” referring to the average length of time a disposable cup is used for, and the duration of his exhibition.

Plastic is not evil. It’s an amazing invention. We don’t need to eradicate it. But we use too much of it, and we’re not realising its potential.

Some of the cups have been partially burned using a blow torch, a playful dig at Singapore’s waste management strategy.

Singapore incinerates 94 per cent of the 800 million kilograms of plastic waste generated each year in four waste-to-energy plants. Another plant, the biggest yet, is near completion.

Incineration neatly removes Singapore’s plastic waste from sight, but is controversial because of the polluting emissions incinerators produce and the effect of removing the incentive to recycle among residents for whom convenience is a deeply embedded part of the culture.

“We wanted to introduce a subtle message around how Singapore incinerates its plastic waste,” says François. “The incinerator is where the cups will end up after the structure comes down, and where they would have ended up anyway,” she says.

“A material like plastic requires a lot of energy to be created. Even if plastic is burned to produce energy, burning it discounts its potential to be reused and made into something else. Incineration is a very oversimplified solution to plastic waste.”

“Plastic is not evil. It’s an amazing invention. We don’t need to eradicate it. But we use too much of it, and we’re not realising its potential,” she says. 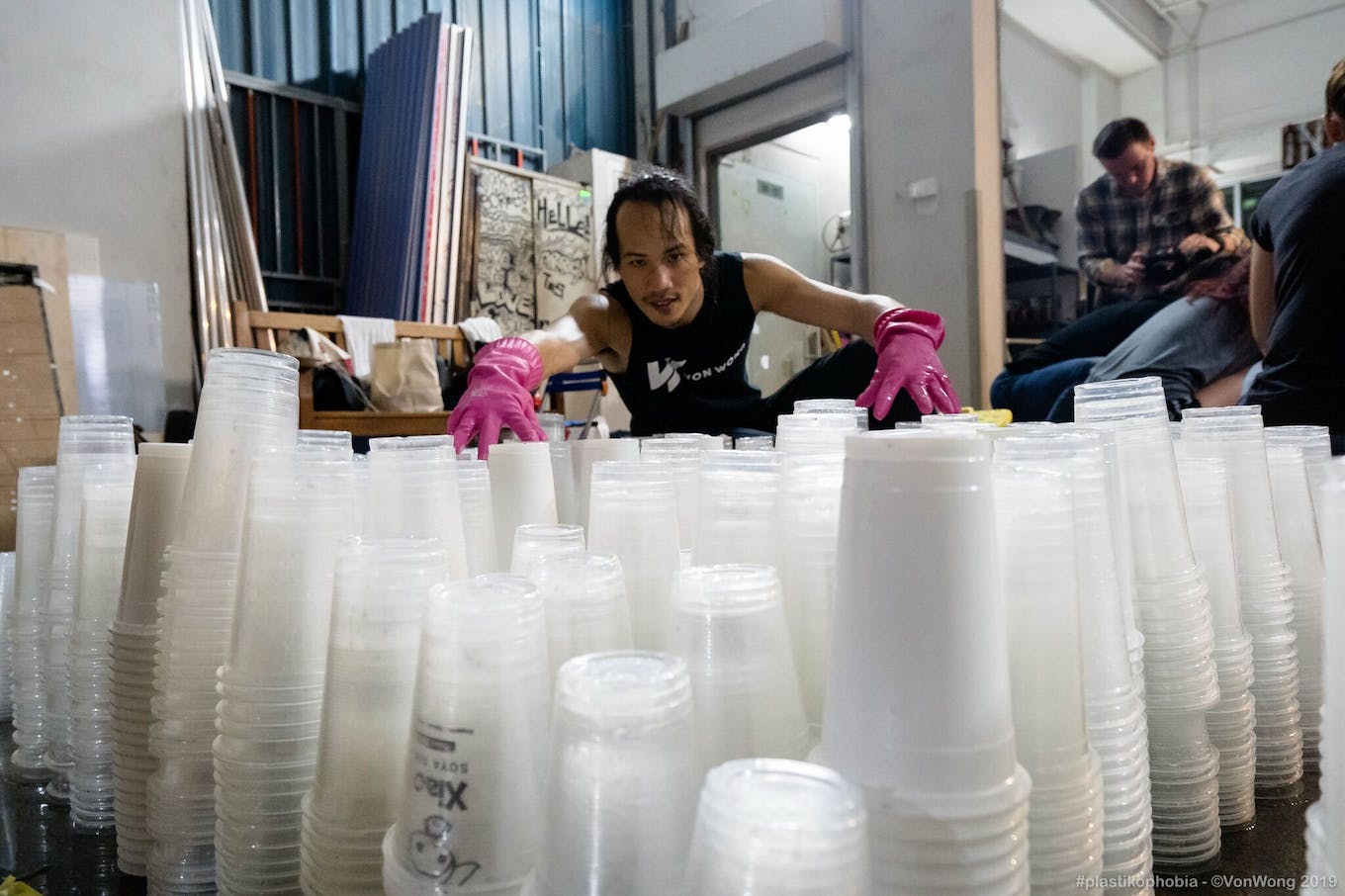 The installation itself is not without an environmental footprint, François admits.

To make the structure, glue and staples were used to hold the cups in place on wooden panels. The panels, which were upcycled from another structure, will be reused when the installation is taken down.

The biggest environmental cost of the installation was water: 61 feet deep by 2 feet wide buckets of water were filled 20 times a day over two days to clean the cups.

“I hope that many thousands of people see the exhibit so we can justify using the amount of water that we did,” says François, who collaborated with Von Wong on an exhibit made from 168,000 plastic straws in Ho Chi Min City earlier this year.

Plastikophobia launches just a few days after Singapore announced new measures in Parliament to curb plastic waste in a country that has seen plastic consumption increase seven-fold since the 1970s.

The Resource Sustainability Bill intends to help companies find ways to reduce the resources they use. The bill launches in a year the government has dubbed the Year Towards Zero waste, and ahead of a masterplan to tackle the city-state’s waste problem that is to be unveiled later in the year.

Plastikophobia will be on display at the Sustainable Singapore Gallery at Marina Barrage until 18 April 2019.