Consumer-facing firms such as Unilever, PepsiCo and IKEA have moved quicker towards ethical palm oil than growers and traders, a new report has found. More needs to be done outside of lead eco-certifier RSPO to drive the industry towards sustainability, the report's authors say.

The week after one of the world’s biggest palm oil producers was blocked from the United States because of alleged human rights infringements, a report has revealed patchy progress towards sustainable practices made by the palm oil industry.

The Committed to sustainable palm oil? study, published on Wednesday (7 October), tracked progress made by members of leading certifier the Roundtable on Sustainable Palm Oil (RSPO) towards “making sustainable palm oil the norm” by analysing their Annual Communication of Progress reports from 2019.

Although there has been a increase in the number of certified RSPO members—from 21 per cent in 2017 to 41 per cent in 2019—the report noted that growers, traders and processors have been slow to transition to sustainable palm.

Currently, about one-fifth of the global palm oil trade is certified sustainable by RSPO. This means it is cultivated without razing rainforests, burning peatlands or exploiting workers or communities in Southeast Asia, where it is predominantly grown. Palm oil, which is found in about half of all supermarket products, contributes to about 5 per cent of annual forest loss in the tropics.

The report, co-authored by the World Wide Fund for Nature (WWF) and Zoological Society of London (ZSL), found that of the 282 grower, processor and trader members of the RSPO that have committed to be fully certified within the next three years, 15 per cent were not certified at all by the end of 2019, while just under a quarter (24 per cent) were less than 50 per cent certified.

Of the 10 biggest grower RSPO members, seven are less than 50 per cent certified, which means they have yet to implement measures to ensure their farming methods do not harm people or forests.

WWF’s global palm oil lead Michael Guindon told Eco-Business that a major factor behind the patchy progress of growers is a lack of incentive to get certified.

Between 25 to 40 per cent of certified sustaintable palm oil (CSPO) is not sold as CSPO, because of an unwillingness among buyers to pay a premium. This is particularly so in the world’s four largest palm oil markets of India, China, Malaysia and Indonesia, which make up about half of global demand.

Included in the study was FGV Holdings, the Malaysian grower and trader whose imports were suspended in the US after a year-long investigation by US Customs revealed labour abuses including intimidation, restriction of movement, and violence. FGV Holdings is less than 50 per cent certified.

The palm oil industry’s largest grower, Sime Darby Plantation, is the most advanced in terms of RSPO certification. The Kuala Lumpur-headquartered company is also the most well certified processor and trader. 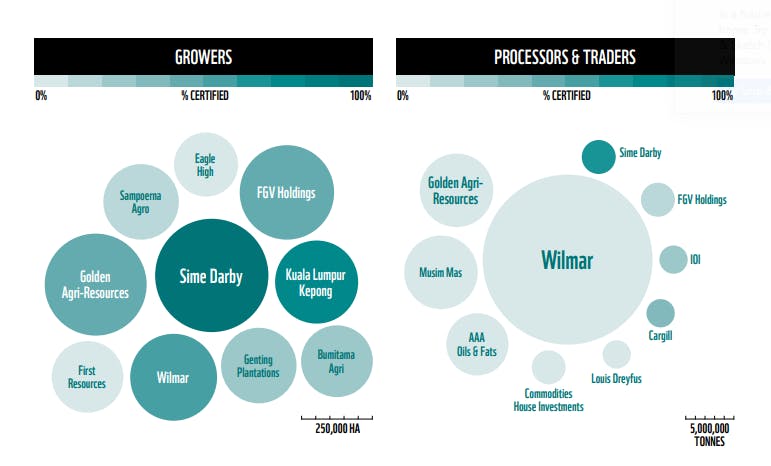 Progress has been much faster among consumer goods manufacturers and retailers, which face greater direct pressure from consumers and activists to raise their sustainable palm game.

Unilever leads the way among consumer goods firms, along with Pepsi, La Lorraine and Zetar. Yum! Brands, the operator of KFC, Pizza Hut, and Taco Bell, is the forerunning retailer for CSPO. 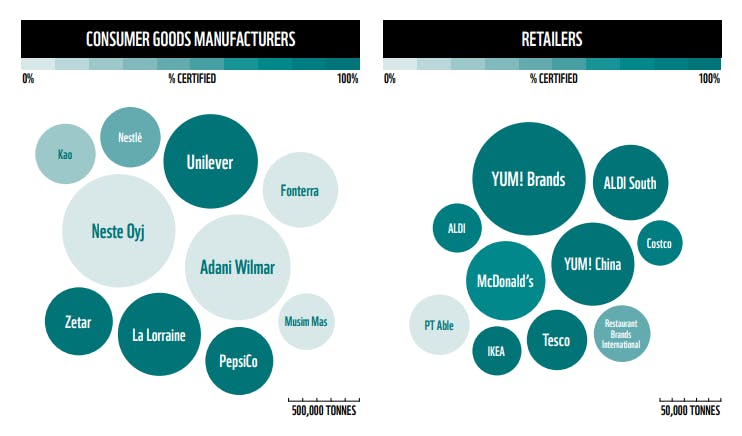 Even so, members of the Consumer Goods Forum, which includes the likes of Unilever, Fonterra, Pepsi and Nestle, will almost certainly miss the target set a decade ago to achieve deforestation-free palm oil supply chains by the end of 2020.

Guindon said that while RSPO certification has been an important way to drive change for the sector, companies needed to do more collaborative work outside of the certification body to expedite progress, for instance forming zero-deforestation working groups, working through alternative groups such as the High Carbon Stock Approach, and exerting greater influence over trading partners.