Ending the world’s fossil fuel subsidies would reduce global CO2 emissions by 0.5 to 2.2 gigatonnes (Gt) per year by 2030, a new study says.

The research, published by Nature, concludes that the removal of subsidies would lead to bigger emissions reductions in oil and gas exporting regions, such as Russia, Latin America and the Middle East, than promised by their Paris Agreement pledges.

In all other regions, removing fossil fuel subsidies would not have as large an impact as the  Paris pledges, the lead author tells Carbon Brief.

However, a researcher not linked to the report tells Carbon Brief that comparing the effects of subsidy removal to the Paris pledges is “unnecessary and inappropriate”, since these economy-wide pledges are generally composed of many other policies and actions than just subsidy removal.

Ending financial support for fossil fuels has long been cited as an important way to reduce the world’s greenhouse gas emissions. Both the G7 and the G20 have pledged to end “inefficient” fossil fuel subsidies – the G7 by 2025, and the G20 with no fixed end-date.

The new research analyses the implications for mitigation efforts in different regions of the world of removing all fossil fuel subsidies.

The researchers built a global dataset of subsidies under both high and low oil prices, and worked with five different modelling teams to look at the impact of removing these subsidies on emissions.

The study found the removal of subsidies would reduce the globe’s CO2 emissions by 0.5-2.2Gt per year compared to a business-as-usual scenario by 2030, equivalent to a 1-5 per cent reduction.(Note though, that under a business-as-usual case overall emissions would increase substantially even with this reduction).

The graph below shows the impact of subsidy removal on emissions in each of the five models used in the study, compared to each model’s baseline, for low (left) and high (right) oil prices. The emissions reductions expected from the Paris pledges (formally known as Nationally Determined Contributions, or NDCs) are also shown, separated into “conditional” (total commitments dependent on international action) and “unconditional” NDCs. 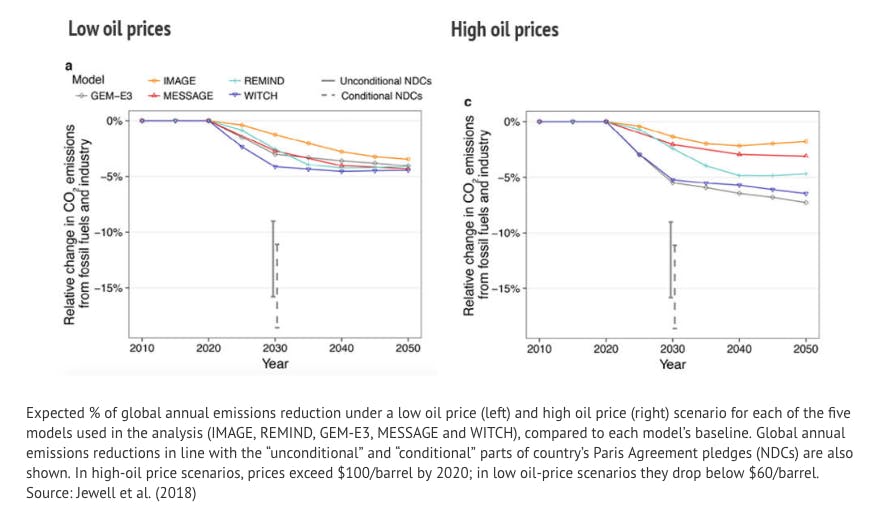 As the graphs show, there is little difference in emissions reductions between low and high oil price scenarios by 2030, although more variation is seen by 2050.

The paper characterises 1-5 per cent reduction by 2030 under both the high and low oil price scenarios as a “small decrease” of CO2 emissions. However, Peter Erickson, climate change policy researcher at the Stockholm Environment Institute (SEI) says such a reduction seems a substantial amount. He tells Carbon Brief:

“That is only ‘small’ compared to the gargantuan size of the problem, which necessarily involves many, many solutions.”

Another report estimating the climate impacts of removing fossil fuel subsidies, released last year by the Global Subsidies Initiative (GSI) and the Overseas Development Institute (ODI), found it would reduce the world’s emissions by 37Gt CO2 between 2017 and 2050.

Update 8/2/2018: A response to the study published today by NGO Oil Change International (OCI) argues there are several problems with its methodology. The biggest of these, OCI says, is that it considers only the dollar value of subsidies to fossil fuel producers, rather than their real-world impact on fossil fuel production and investment decision-making. For example, a recent study led by Erickson from the SEI and also published in Nature Energy found nearly half of the US’s future the country’s oil production would be unprofitable at $50/barrel oil prices in the absence of federal and state subsidies.

The study compares the modelled emissions reductions due to removing fossil fuel subsidies in different countries to what they promised in their Paris pledges.

According to the study, current climate pledges add up to a decrease of 4-8Gt CO2 from fossil fuels and industry. Therefore, the 0.5-2.2 Gt CO2 reduction found in the study translates to 6-55 per cent of the emissions reductions expected from these pledges.

Jessica Jewell, researcher at the International Institute for Applied Systems Analysis (IIASA) and lead author of the paper, says the study found the emission reductions would vary substantially by region. She tells Carbon Brief:

“So, in oil- and gas-exporting regions [such as Russia, Latin America and the Middle East and North Africa], removing fossil fuel subsidies would equal or exceed emission reductions pledged under the Paris Agreement. But, in all other regions, removing fossil fuel subsidies would underperform emission reductions already pledged under the Paris Agreement.”

However, Erickson argues it does not seem fair to compare the impact of subsidy removal to the Paris pledges. He tells Carbon Brief:

“The constant comparisons to NDCs is unnecessary and inappropriate. NDCs are generally economy-wide emissions pledges. Fossil fuel subsidy removal is but one type of policy to help countries achieve this, but also to yield other benefits.”

He adds that fossil fuel subsidy removal has CO2 benefits that extend beyond territorial boundaries, therefore may not be captured within an NDC.

The paper also finds that in some countries, such as India, emissions could increase if fossil fuel subsidies are removed.

This could occur if, for example, the removal of subsidised oil and gas resulted in the increased use of coal rather than an increase in energy efficiency or renewables.

Erickson says the finding in some models that coal-rich nations would increase their emissions in the absence of subsidies is “not surprising” and “a function of their applying a single global policy”. He says:

“It would be interesting to see them test this finding against alternate assumptions about declining cost of renewables, for example, as well as comment on the political economy dynamics that may make a switch to coal in some regions no longer as feasible due to changing political and social norms.”

The paper also finds removing fossil fuel subsidies would not strongly stimulate the growth of renewable energy by 2030, leading to an increase of around two percentage points. However, it is worth noting that the penetration of renewables is not in itself a specific policy goal of fossil fuel subsidy reform.

The paper also finds that subsidy removal would reduce the average global carbon price needed to achieve modest climate goals (2–2.3C by 2100) by 2-12 per cent in 2020-2050, assuming low oil prices are maintained.

The paper warns that its findings show the impacts that subsidy removal might have on “poor people” need to be taken into account.

For instance, the authors express concern that the removal of subsidies in some areas could mean the switch away from burning firewood and charcoal becomes out of reach for “the poor”. Jewell tells Carbon Brief:

Shelagh Whitley, head of the climate and energy programme at the Overseas Development Institute (ODI), a UK-based thinktank which publishes regular reports on fossil fuel subsidies, tells Carbon Brief it is “quite obvious” that you need to use some fossil fuel subsidy reform savings to protect the poor from their effects. She says:

“I think we know that that’s true, so subsidies benefit the rich more, but when they’re removed they will have a greater impact on the poor in terms of their spending capacity etc.”

“That’s why you often see significant portions of the fiscal space that’s created through subsidy reform then being redirected to other social protection instruments that will particularly support the poorest and more vulnerable.”

In Indonesia, for example, she says, subsidy reform has led to extra support for free healthcare, youth social programmes and even cash transfers to the poorest.

The study also notes that today’s low oil prices provide a unique political opportunity to remove subsidies, having a large effect on emissions but affecting a comparatively small number of poor people. (Note, though, that oil prices have increased substantially in the past few years, reaching around $60/barrel over the past few months up from $30/barrel in early 2016).