Floods, typhoons, wildfires and earthquakes claimed 9,200 lives in 2021, sounding the alarm bells of a deteriorating climate. Asia Pacific lags the world in disaster insurance, according to a study by Munich Re.

Financial losses from natural disasters have increased for the third consecutive year — another sign of the worsening impacts of climate change.

The costliest nature-related calamity at US$65 billion was Hurricane Ida, which struck the east coast of the United States and several Caribbean nations in August. Summer floods in Europe cost a record US$54 billion, according to data from global insurer Munich Re. 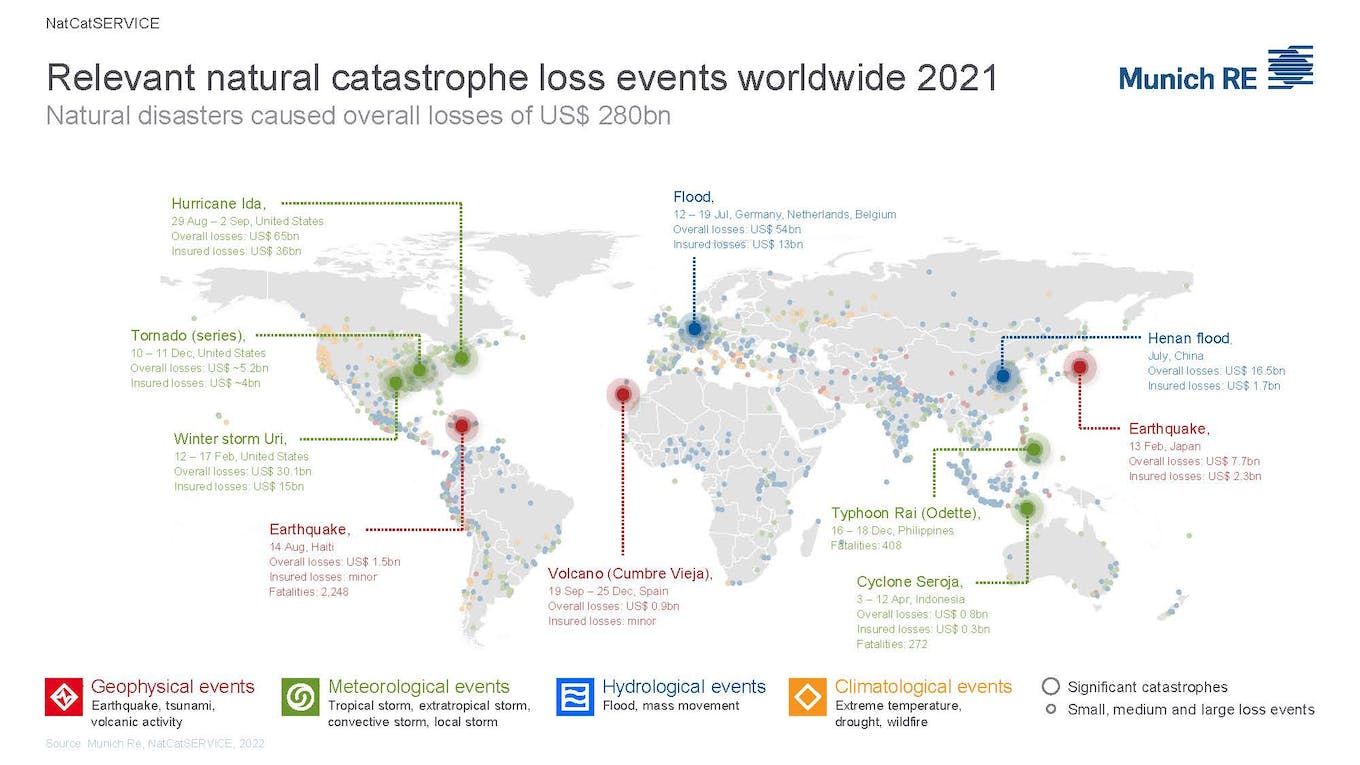 The financial and death toll of some of the worst natural disasters in 2021 [click to enlarge]. Image: Munich Re. 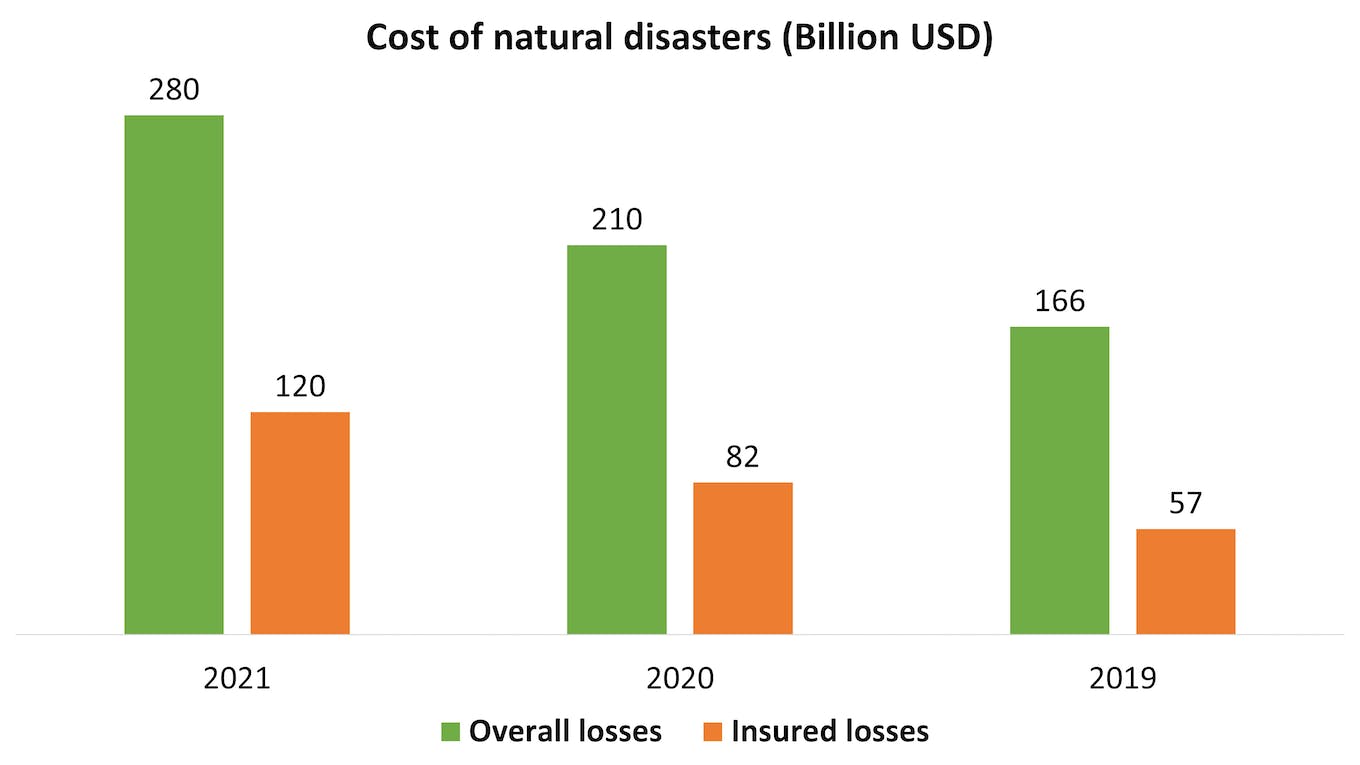 Losses from natural catastrophes increased by two-thirds since 2019. Data: Munich Re.

The fraction of insured damages rose to 43 per cent in 2021, up from 34 per cent in 2019. Munich Re attributed the rise to a spike in climate-related losses in the United States, where more properties are insured. The country faced a series of tornadoes, tropical storms and an exceptionally cold winter.

The insurance rate was lower at 24 per cent in Europe and 17 per cent in the Asia-Pacific. A tenth of US$16.5 billion of damages from heavy flooding in central China was recovered, along with 30 per cent of almost US$8 billion from a magnitude seven earthquake in Japan.

Losses across the Asia-Pacific totalled US$50 billion last year, and have been predicted to rise to US$160 billion annually by 2030.

Professor Benjamin Horton, director of the Earth Observatory of Singapore, said there have been regional efforts to boost disaster risk financing and management in Asia, but projects at sufficient scale remain scarce.

Munich Re added that insurance rates in “poorer countries” was under 10 per cent, which means many victims lost money or relied on aid.

The US$120 billion payout for natural disasters made 2021 the second-costliest year for guarantors after 2017, when a series of storms wrecked US territories.

Insured costs last year were on-par with 2005, when Hurricane Katrina tore into the United States, and 2011, when an earthquake and tsunami caused a nuclear plant meltdown in Japan.

The deadliest disasters did not necessarily coincide with the costliest ones. An earthquake in Haiti, which is still recovering from a 2010 tremor, cost US$1.5 billion and killed over 2,000 people – the highest toll from a single event last year.

A cyclone that swept through Indonesia and Australia damaged US$1 billion of property and killed 270 people.

Meanwhile, the central China floods was both the third deadliest event at 302 casualties, and the fourth costliest. A cold snap that took out power in Texas, United States was the third costliest calamity at over US$30 billion, and fifth most fatal, claiming 235 lives.

Munich Re added that earthquakes and volcanoes should also be taken seriously. Last year, an eruption in Indonesia killed 50 people, while another in the Canary Islands, a Spanish territory near Africa, destroyed 3,000 properties.

The insurer’s report emerges as floods devastate Malaysia, with damages estimated to run into the billions of ringgit.

With more extreme weather events expected in the coming years, insurers are expected to raise prices to manage damage costs.

The United States increased the premiums for its National Flood Insurance Program last October, with home insurance prices this year expected to rise by up to US$1,200. For some areas and properties, property flood insurance may eventually triple to over US$10,000 a year.

Another global insurer, Swiss Re, expects property insurance premiums to rise by 22 per cent, or US$183 billion, by 2040 because of climate change-related extreme weather. It added that insured catastrophe losses could rise by up to 120 per cent in the same period.

Consultancy Deloitte warned that rising premiums may turn people away, and suggested providing discounts for homeowners who protect themselves against disasters.

“Disaster risk financing initiatives should be transparent, accountable and regulated, and focus on building preparedness and resilience,” said Horton, adding that more good can be done if stakeholders like non-governmental organisations and academia are on board.